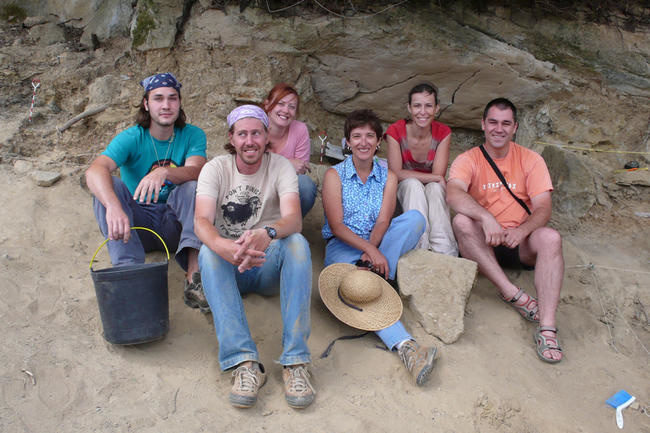 University of Iowa anthropology professor Katina Lillios and UI archaeologists were involved in the largest study to date of ancient DNA from the Iberian Peninsula (modern-day Portugal and Spain). This study offers new insights into the populations that lived in this region over the last 8,000 years. As far back as 2,500 BCE, the researchers found, Iberians began living alongside people who moved in from central Europe and carried recent genetic ancestry from the Russian steppe. Within a few hundred years, the two groups had extensively interbred. For this study, a team of researchers at Harvard Medical School and the Institute of Evolutionary Biology in Spain analyzed genomes from 403 ancient Iberians who lived between about 6,000 BCE and 1,600 CE.

Some of the samples used for this study, published in Science on March 15, 2019, were obtained by Lillios from excavations she directed at the 5,000-year-old burial site of Bolores in Portugal between 2007 and 2012, which was funded by the UI and the National Science Foundation. Other UI collaborators on the Bolores project include Anna Waterman, Jennifer Mack, and Joe Alan Artz.

Lillios and a group of UI students will soon be working at Castillejo del Bonete, in central Spain, a key site discussed in this study. There, a woman and man were found buried side by side, and analyses revealed that the woman's ancestry was entirely local, while the man had very recent ancestors from central Europe. Luis Benítez de Lugo, from the Universidad Autónoma de Madrid, directed the excavations at Castillejo del Bonete and recently invited Lillios to collaborate on the excavations at the site. With the help of a UI Global Research Partnership Award from International Programs, Lillios and five UI students will excavate at Castillejo del Bonete in July.

Lillios notes that “the period between 3,000 and 2,000 BCE in Iberia was a time of profound shifts in culture and climate. Large ancient DNA studies are valuable in that they generate questions and another set of variables that we need to consider in our analyses of historical change. Excavations at sites like Castillejo del Bonete provide an opportunity for us as archaeologists to investigate whether biological ancestry had a relationship to social or cultural practices in the Iberian Bronze Age.”

The genomic study, which was conducted by a 111-person international team also details genetic variation among ancient hunter-gatherers, documents intermingling of ancient Iberians with people from North Africa and the Mediterranean, and provides an additional explanation for why present-day Basques, who have such a distinctive language and culture, are also ancestrally different from other Iberians.