Student Reflection on Race and Ethnicity Abroad: Finding Identity Outside the U.S. 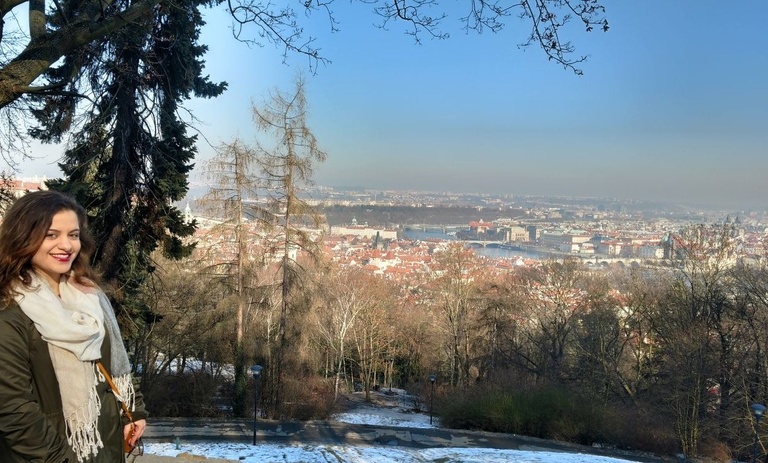 My name is Lina Khodor and I am a senior studying International Studies on the Human Rights track and with a minor in Gender, Women’s, and Sexuality Studies. I studied abroad in Prague, Czech Republic for the spring semester of 2017. In Prague I found myself inspired by the art, architecture, and the sheer amount of beer consumed by the locals. The city, from its Old Town Square to its beautiful castles, made it easy to believe I was in a fairytale for five months. When walking along the cobblestone streets from my apartment to my favorite bakery, I would be greeted with tall, grand buildings each painted in different bright colors. It was magical, and I have come to love the city as if it were a second home. Living there made me realize that I was not afraid to leave the comfortable sheltered lifestyle I have in Iowa. If there is one thing college students can all relate to, it’s the anxious feeling we all have at one point or another about what to do and where to go in our professional future. We doubt ourselves, and that doubt is terrifying. I was not expecting some sort of miracle that I would “find myself” while studying abroad and suddenly know exactly what I want to do with my life, but it did give me a nudge in the right direction. My internship at La Strada Czech Republic, an NGO dedicated to systemically ending human trafficking and exploitation, helped give me the courage and ambition to want to work abroad in the human rights field. That little push gave me a sense of independence and confidence I didn’t know I needed.

I left the United States at the end of a particularly divisive and tumultuous presidential election, one that brought topics such as Islamist terrorism, Islamophobia, and Syrian refugees to the forefront of American politics, media, and minds. As an Arab-American with Syrian descent, these topics have constantly surrounded me and my family. Before embarking on my 5 month long journey to Prague, I was anxious that I would be targeted for my identity, so I told myself to avoid speaking Arabic in public spaces and removed the necklace I always wore that says my name in Arabic. I was conflicted because I did not want to feel like I had to hide aspects of my culture, but I also wanted to avoid potential conflict in a foreign country. Luckily, I was never targeted as an Arab or discriminated against for it. My racial ambiguity let me weave in and out of European cities with much less issues than, say, a woman wearing a hijab. When I interacted with Europeans, many of them simply saw me as American and instead of asking me “what are you?” which is a question I am often asked in the United States, they asked me “where are you from?” These interactions pushed me to view myself beyond others’ perceptions of my ethnic identity. By viewing myself in a global context rather than the social and political context of the United States, my self-confidence, self-perception, and perception of the world increased. 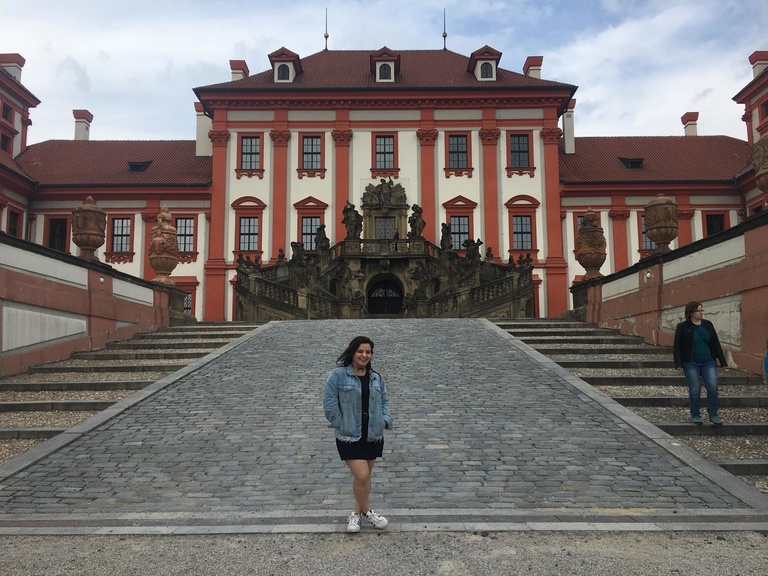 However, what was shocking was that the few times I did face prejudice, it was not because I was Arab, it was because people thought I was Roma. That was certainly a challenge I was blindsided by, as I knew practically nothing about the treatment and history of the Romani people in the Czech Republic (otherwise referred to as the gypsies, which I came to learn is a derogatory term). My darker-skinned friends were more vulnerable to face hostility in public spaces as they were assumed to be Roma thieves, criminals, and beggars. Most of my peers in my study abroad program were white, and could not relate to the discrimination that the students of color were vulnerable to, particularly those who could pass as Roma. I say this not to deter fellow students of color from studying abroad, as it was undoubtedly the best life experience I could have had, but rather to share openly and honestly that minorities might face unique hardships and challenges abroad. By facing these challenges, and seeing others face them, I was exposed to real human right issues that the Czech Republic faces that I could not have known without studying and living there. Such awareness allowed me to empathize with the Romani people and appreciate their cultural differences rather than stigmatize them. This, in turn, allowed me to appreciate my own culture’s differences even if they are perceived as negative by mainstream society. These revelations, though hard to swallow, are important for all minority students to have. Studying abroad may not be all sunshine and rainbows for students of color, but that does not mean it isn’t meant for us. It is possible for us to shape our identity in a global context, and perceive ourselves as global citizens rather than just racial minorities.

Please note that the opinions and views expressed by diversity ambassadors are solely those of the students and do not reflect or represent the views of International Programs or the University of Iowa.