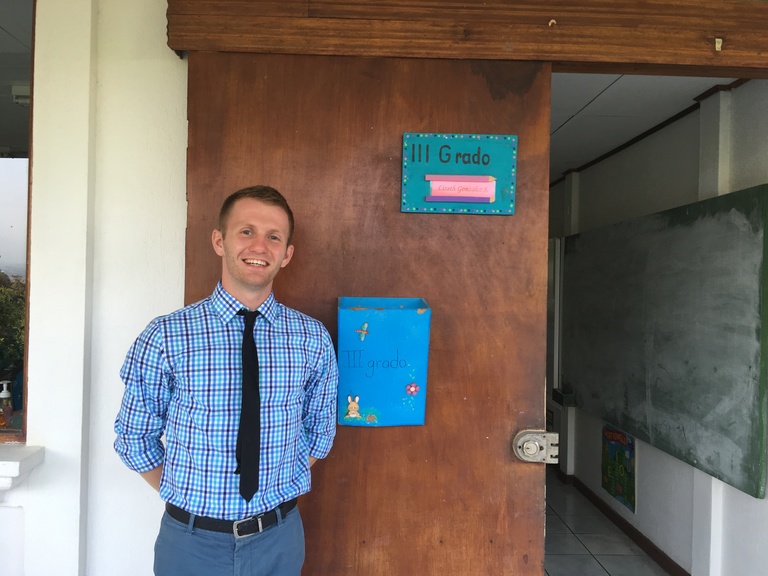 Henry Hartzler, a senior at the University of Iowa studying elementary education and ESL, completing his ESL student teaching in Costa Rica

For Henry Hartzler, what started as a passion for both teaching and climate science eventually transformed into the opportunity of a lifetime -- this August, he will be serving in the Peace Corps as an environmental education primary teacher in Nicaragua.

“The biggest draw to Peace Corps for me was the emphasis the organization placed on community integration,” Hartzler, a senior at the University of Iowa, said.

“My work with immigrant families in the Iowa City area taught me that both community integration, and mutual trust, are incredibly important when working with families from a variety of cultures.”

Peace Corps offered him the opportunity to combine these two facets. Since the beginning of his time at the UI, Hartzler’s goal was to teach abroad immediately after of college. He began his instructional experience by accepting a part-time job for UI Recreational Services as a Climbing Wall Supervisor, Challenge Course Facilitator, and LLS Assistant Instructor.

During the last two years of his undergraduate career, Hartzler also taught Spanish for kindergartners through fifth graders in the Longfellow Elementary World Language Program. In addition, he volunteered as an English/Spanish literacy tutor at the Horace Mann Elementary adult tutoring program, working with immigrant families every Tuesday night.

“I believe that this experience will reinforce my ability to speak in Spanish, as all of the instruction that I will be teaching in Nicaragua will be in Spanish as well,” he said.

Hartzler is equally dedicated to environmental sustainability, and believes that while climate science is an imperative issue that our world faces today, education is equally important for a sustainable future.

Currently, Harztler is completing the second half of his student teaching in Costa Rica, where he is teaching English as a second language.

Upon his return to the U.S., he plans to be a dual-language elementary school teacher and work with immigrant families.

“I have seen firsthand that he is committed, resourceful, and proactive in finding opportunities to enhance his cross-cultural awareness and become a better teacher.”

For more information about getting involved in the Peace Corps through the University of Iowa, follow this link.

To get a firsthand glimpse at Henry's experiences completing his ESL student teaching abroad, explore some his personal blog posts here.