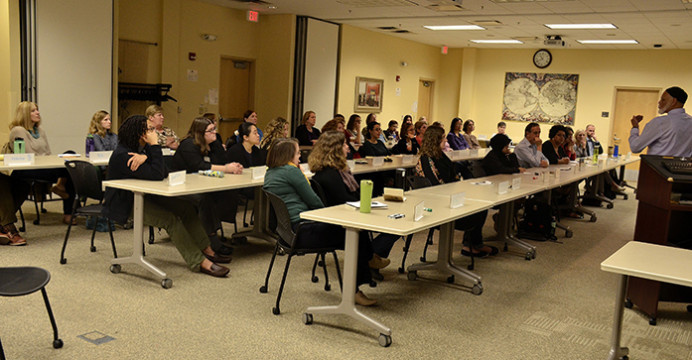 An audience listens to a lecture on "Muslim Students on a Secular Campus" in the International Commons at the University Capitol Centre. Photo by Karley Finkel, The Daily Iowan.

Issues affecting Muslims on campus were finally brought to light.

The University of Iowa International Programs conducted a workshop titled “Muslims on a Secular Campus” Thursday.

The workshop was part of the Building Our Global Community certificate program that aims to educate UI faculty and staff on fostering an intercultural campus community for international students and scholars.

“I can easily jump into what Muslim students experience on a campus like this,” said Motier Haskins, a speaker and clinical assistant professor at the UI School of Social Work. “But we can’t understand the experiences of Muslim students without first understanding what Islam is.”

A large portion of the discussion was focused on an introduction about Islam, misconceptions tied to the religion, and strategies for faculty and staff to enhance their interactions with Muslim students on campus.

The major concern highlighted at the dialogue was the lack of religious resources available for the Muslim community at the UI.

“We need an ongoing safe place, where any Muslim student, faculty or staff can find themselves at during the time of prayer and pray,” Haskins said “When you look around campus, you may find opportunities for other religions, but you will not find one for Muslims at the UI.”

A panel of Muslim students shared their experiences at the UI. This panel included UI graduate Rana Moustafa and UI seniors Mohammed Ismail and Doaa Elgaali.

“I look at the TV and read all these information about Boko Haram, ISIS, and Hamas; it’s a very small percentage of the Muslim world,” Haskins said. “In fact, I can say this is a group of folks who have hijacked the religion.”

Haskins said one of the biggest challenges faced by Muslims is to be singled out or identified by their names or appearances.

“If you have a particular name that happens to be Mohammed Abdullah Rahman, and you look a certain way, then you’re going to be profiled,” he said. “And perhaps harassed in some ways.”

Moustafa, an Egyptian-American, said one common struggle among American Muslims is explaining to people about their heritage partly because they appear “foreign.”

“We grew up and lived here so we do have American values, but we also have our Muslims values, and I have my Sudanese culture,” Elgaali said. “Islam is very diverse, there is a lot of intersections.”

Shuhui Lin, the international student support and retention specialist at the UI International Programs, said the workshop was educational and it helped widen her understanding of the religion.

“Hearing from the students and Professor Motier really helped us understand what we have been taking for granted, and about the barriers faced by Muslim students,” she said. “And we hope to raise more awareness about that.”