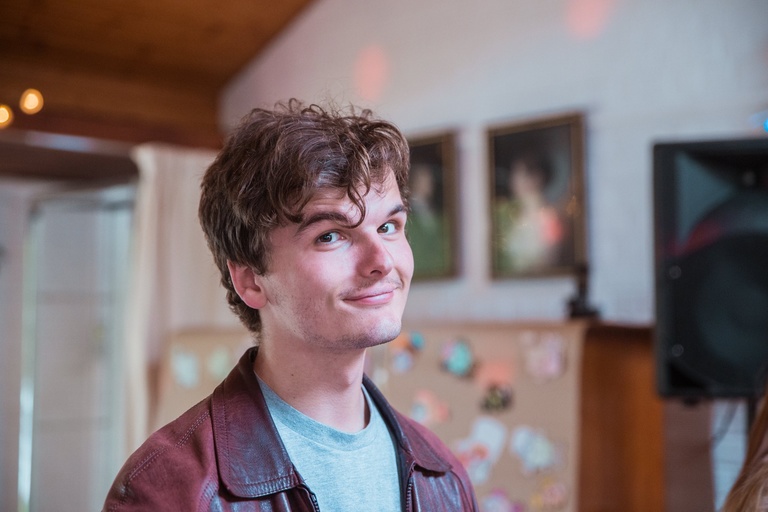 University of Iowa English and creative writing student Kyler Johnson of West Des Moines, Iowa, has been awarded a 2022 U.S. Department of State Critical Language Scholarship (CLS) to study in Florianópolis, Brazil, this summer for an intensive Portuguese language program.

"In my time as a Portuguese student at Iowa, I've discovered so many ways in which we as an American society and those of the Portuguese-speaking countries can learn from one another."

With minors in French, Portuguese, Chinese, and translation for global literacy, Johnson credits his language studies at Iowa for opening his eyes to a whole new world.

"Having already studied French, I thought I would be able to pick up on the Portuguese grammar patterns and vocabulary with ease, yet what really pulled me in was my Portuguese professor, Cris Lira, who took me beyond the practical considerations of grammar and vocabulary, leading me into the culture, literature, and world presence of the language," says Johnson. "She brought me into children's literature of the lusophone world, the stories of Black woman in Latin America, and has encouraged me to pursue translation opportunities that show me the importance and presence of the Portuguese language. As one of the most-spoken languages in the world, Portuguese is connected to so many incredible writers, thinkers, and creators across the globe. In my time as a Portuguese student at Iowa, I've discovered so many ways in which we as an American society and those of the Portuguese-speaking countries can learn from one another."

One expectation of CLS participants is to continue their language study beyond the scholarship period, and later apply their critical language skills in their future professional careers.

"As I approach my senior year, my goal is to apply for a Fulbright English Teaching Assistantship to Brazil," says Johnson.  "One day, I hope to be able to translate full-length books from Portuguese to English. Additionally, as a creative writer myself, I am looking forward to the bounty of cultural and linguistic experiences I will bring back with me from this experience to reflect on and create from, always framing my work with the goal of demonstrating and encouraging the importance of travel, language, and sticking our necks out of our American shells from time to time."

CLS is a competitive scholarship, but Johnson encourages his fellow UI students not to be discouraged.

"It's a cliché, but I have to reiterate the old adage: if at first you don't succeed, try, try again--and I'm serious about that one. This is my second time applying for the Critical Language Scholarship award, and the process came so much more easily having done it already once before. While disheartened after my first year at not making it through to the second round, I became much more critical about what I submitted for my second attempt. In drafting and redrafting my application essays, I also discovered, even just within a year's time, how I'd grown and changed immensely, which shifted what I focused on."