In the news: Author finds writing that makes his heart sing 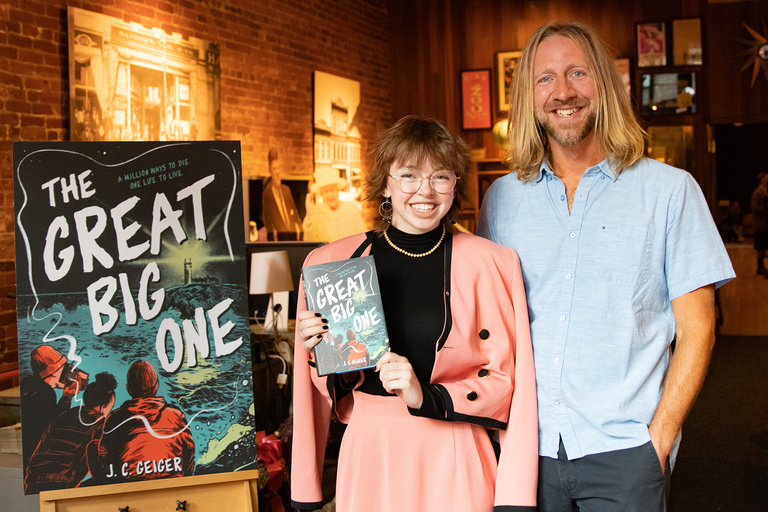 J.C. Geiger stands next to Anna Boyd, the first beta reader of the final draft of Geiger’s latest book, The Great Big One. Boyd also created a Spotify playlist for the book, which helped inspire the mixtape project that accompanies the novel.

When J.C. Geiger was 17, he was offered a screenwriting internship with MGM Studios. But before the Morris, Illinois, high school student was allowed to accept the position, a studio executive asked him to speak to a couple of screenwriters.

“One of them in particular, Michael Lucker, became a sort of mentor to me, and he strongly advised that I not come out to California right then,” Geiger says. “He told me to go out and have adventures and live a life. He told me to not come out to California and become like every other writer out there just churning out what they think is good writing. He told me I needed to develop myself as a human being first.”

Geiger took that advice. He traveled, had adventures, and developed as a writer—although not a screenwriter. The Eugene, Oregon-based author recently published his second novel, The Great Big One, which has an accompanying soundtrack filled with old and new pieces by some of Geiger’s favorite musicians.

This new path started at the University of Iowa, where Geiger headed after high school.

“I was still thinking about UCLA or USC, but I opened my eyes a little bit more and I was like, ‘Oh my gosh, the best actual writing school is one state away,’” says Geiger, who graduated in 2001 with a BA in English and a teaching certificate. “Iowa obviously had a really strong, well-respected writing program, but they also had a strong communications and film program.”

Geiger points to his participation in undergraduate writers’ workshop courses, No Shame Theater, and Student Video Productions as being particularly influential in his life.

“I was able to feel what a workshop experience was like and be pushed by it,” Geiger says. “With film, it helped me think more visually and communicate more visually in my writing. No Shame helped me learn to write more quickly and to not be afraid of producing something and making something public and viewable.”

He says all these experiences helped shape his future and who he is now.

“They gave me the opportunity to lean into the projects that I most loved and learn what I most loved about those experiences,” Geiger says. “I had opportunities where I could test my theories in real time. I could write a screenplay and film it with friends and then be like, ‘Is that really what I want to do?’ I learned filmmaking didn’t really meet that soul-level need that I had for writing, which eventually turned out to be the deep processing time that writing a novel affords me.”

But Geiger says the most life-altering experience he had during college was studying abroad.