In the news: Connecting the world through language 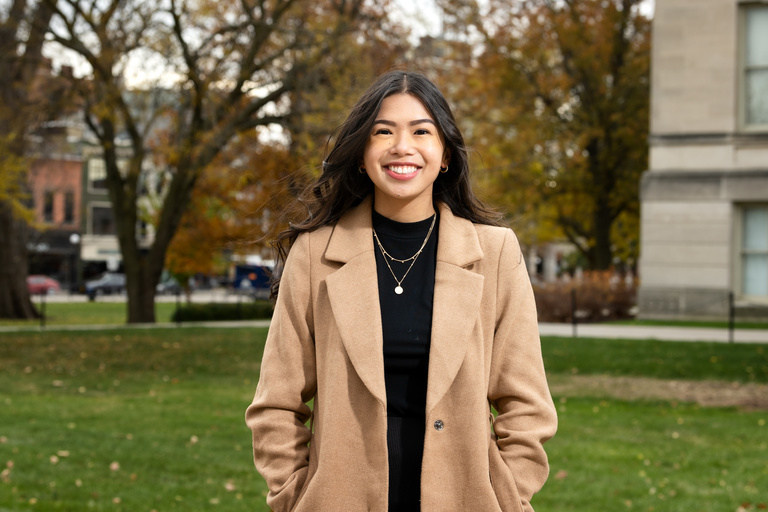 Growing up in the Midwest, Holly Harris always felt a connection with the opposite side of the world. Harris was adopted from China at just 10 months old, and she developed a passion for exploring differences between cultures. As she got older, her experiences through school and travel transformed her interest in life outside the U.S. into a dream career.

“Throughout elementary and high school, I took Spanish classes and really just fell in love with learning the language,” she says. “After high school, I went to Brazil through a youth exchange program. While I was living there, I learned Portuguese and decided I wanted to continue learning it on an academic level and make it part of my career.”

Harris will graduate this fall with a bachelor’s degree in Portuguese, a bachelor’s degree in international studies, a certificate in nonprofit leadership and philanthropy, and a minor in Spanish. Her time on campus has been highlighted by her work as a research fellow assisting Armando Duarte, a Brazilian professor in the Iowa Department of Dance, with the translation of historical interviews about samba and Carnival from Portuguese to English.

“After I translate the interviews, the text is analyzed and applied to research. Our goal is to put together something that will spread awareness about Brazilian culture—a lot of which people in the U.S. are not familiar with,” Harris says. “Dance is an important part of Brazilian history. When African Brazilians were enslaved, they used dance and music as a way to hide their martial arts. With my research now, I think it’s important to bring attention to the dancers so we’re also able to commemorate those who have passed away.”