2021 International Parent of the Year

International Programs is honored to present the International Parent of the Year award to Itse Ejughemre. Honorable mention goes to Joseph and Florence Harry Mills and to Pallav and Trupti Pandya. 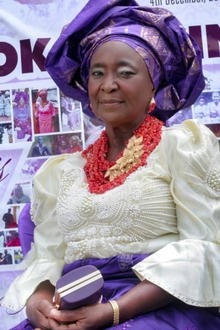 Itse Ejughemre—International Parent of the Year

Ufuoma Ejughemre is a community health physician currently pursuing his PhD in Health Services and Policy at the University of Iowa. Ufuoma nominated his mother, Itse Ejughemre, for the International Parent of the Year award.

Itse Ejughemre, from Benin City, Nigeria, is a retired civil servant, solicitor and advocate, and perhaps most importantly to her son Ufuoma, the mother of five accomplished children. In Ufuoma’s words:

“Society is oftentimes unsympathetic to people who have the hard luck of being outside of the norm whether by their own making or as a result of unsavory circumstances, but the bottom-line is predicated upon one’s attitude and choices. This reflects the story my mother- Itse Ejughemre (nee Onosode), who despite the odds she has faced in life has built a level of success for herself and contributes meaningfully to her children’s success story.”

She had humble beginnings and struggled under difficult circumstances to finish secondary school, advanced herself by taking secretarial courses, joined the civil service, and got married. When in her mid-thirties the marriage ended, says Ufuoma, “She became a ‘social widow’ saddled with the full responsibility of taking care of five young children, the youngest being a little over a year old. As difficult as her roles became—single parent, sole breadwinner, mother etc. —she carried on with faith, determination and a 'can do' attitude, not succumbing to bitterness or depression.”

Ufuoma remembers her working hard and somehow remaining optimistic, “…laying an example of discipline, honesty, integrity and faith through her interactions with family, friends, neighbors and colleagues and these were all visible to her children as they also joined her in these business activities. Her mantra, often repeated to her kids was ‘I can and I will!’ On several occasions, she willingly pawned such valuables as she had to ensure her children’s welfare and education until nothing of worth was left to sell. Being faced by opposition from family and friends that she was undertaking an impossible role, she persevered: in spite of the mockeries, condescension, debts and other social challenges. She was often reminded she was wasting her time because her children would eventually return to take care of their father who had totally absconded his responsibilities. And in a society where marital separation is frowned at, and the woman is often reproached and castigated as being responsible for the collapse of the home, she remained undeterred, carried on with a smile and a cheerful disposition, taking things in their strides.”

Itse was not one to give up. She followed her dreams to law school and completed her bachelor’s degree in law while continuing to provide for her children who were by now living in various parts of Nigeria. “She ensured that her children understood that success comes with a price and a lot of tears,” says Ufuoma. “She also taught us to remain humble and grateful. It is often a wonder to people how she single-handedly raised four boys in a neighborhood that can best be described as a slum and a ghetto, who have turned out to be well-educated and fine gentlemen. Each child, even though unique in his own right and pursuit, asserts to the same thread of connection to our mother who carved indelible imprints in his life that has served as a guide and mentor as he wove and continues to weave through the maze of life. Today her eldest son is an electrical-electronic engineer and a certified project manager with a rich experience in ICT and project management having been in operations in multinational corporations in more than three dozen countries around the globe and presently in Seattle, Washington, in the United States. Her second, an electrical-electronics engineer obtained a PhD in the same field from one of the premiere universities in Nigeria. Her third son (myself) graduated with several awards from the medical school and is a community health physician. My current engagement in the PhD in Health Services and Policy at the University of Iowa also attests to her encouragement to make greater impacts on the wellbeing of humanity. Her youngest son is serving in the Nigerian army and her daughter is currently pursuing a PhD in computer science. Although, not actively involved in our daily lives today, she continues to cheer us (me) with her words and calls to reach for more, and I always hear her still small voice whisper... ‘I can, and I will!’ ” 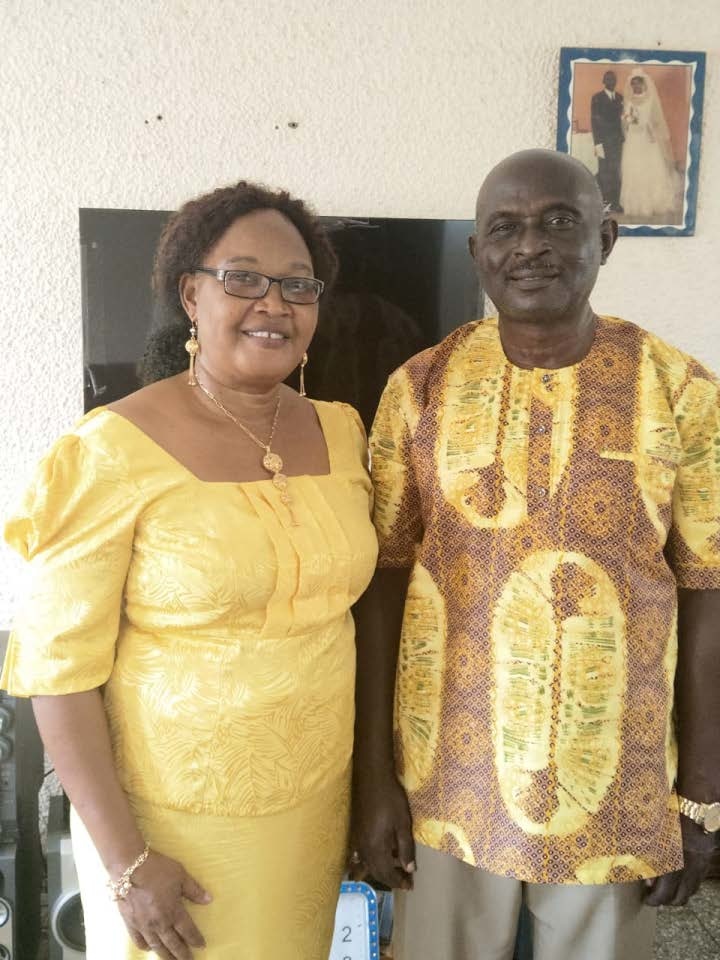 Joseph and Florence Harry Mills are the parents of Agnes Harry Mills.  Agnes, from Takoradi, Ghana, is a graduate student in art and art history at the University of Iowa.

With two teachers for parents, Agnes has always known the value of education. “They are both teachers,” says Agnes, “yet I have never felt undue pressure from them to perform excellently academically.
Instead, they encourage and challenge me in love. I remember as a kid, when I would get my report card, they would go through it with me, make a big deal out of the good grades I got and help me figure out why I got lower grades in other areas and the best way to do better next time. To get me to learn how to cook, my parents would say ‘try it, we would eat it anyway it comes out.’ And truthfully, they did eat it! Imagine what that did to my confidence. Today, my friends commend me a lot on my cooking skills.”

Agnes’s father was the first to notice her artistic inclinations. “He encouraged me when I would try to draw or get involved with arts and crafts in school. My Mom on the other hand was a little late in joining the party. I was also good in science and quite talkative, so she had hoped I would be a doctor or a lawyer. When I moved to Ghana in the second year of high school, I had to choose whether I was going to be a visual arts, science, or general arts student. I must state here for the record that being an artist where I am from in both Nigeria and Ghana is seen more as a hobby, not an actual career. As a result, a lot of parents never allowed their children to study visual arts regardless of how many obvious artistic talents they possessed. So, I understood my mom’s hesitation. There is literally no job market for you, and she was concerned about my future. She finally threw her weight behind me also. One profound thing about my parents is that they would advise us, but at the end of the day, they always asked us, now, what do you want? This has helped me, and my siblings grow up with quite independent minds, yet having a strong regard for authority, and good counsel.”

But when it comes to life lessons, Agnes looks to the love and generosity her parents have shown to people they barely know. “They are the kindest and most selfless people I know. I grew up watching my parents give and open their hearts and home to the extent that it nearly destroyed them... Yet, I never saw my parents relent in doing good, showing love, and giving....They were my light.” 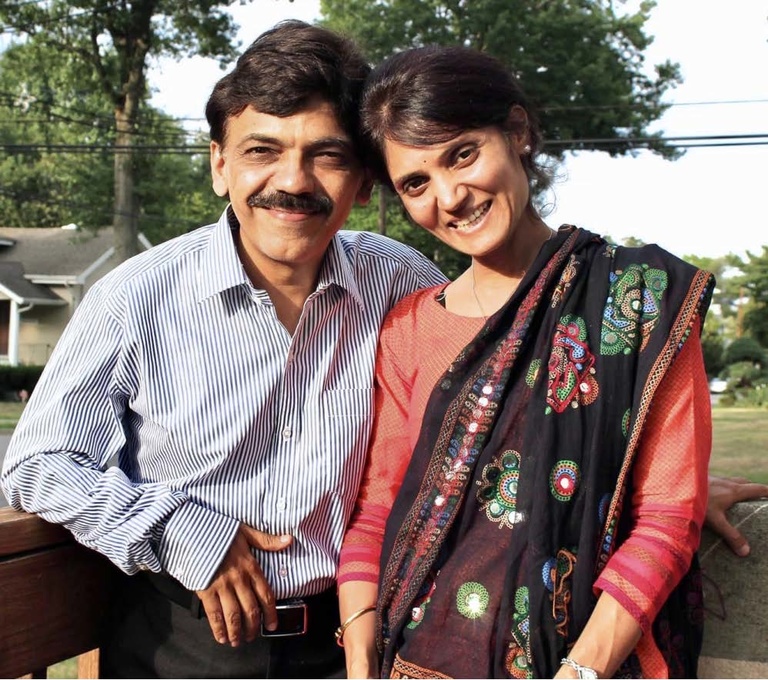 Pallav and Trupti Pandya are the parents of Jahnavi Pandya, a graduate student studying psychological and quantitative foundations in the UI College of Education. Jahnavi's parents live in Mumbai, India.

Jahnavi nominated her parents for the International Parent of the Year award because of her admiration for their personal journey, the values they instilled in their children, and their commitment to giving of themselves for those who have had fewer opportunities. Jahnavi’s father, Pallav Pandya, is a musician by profession and has used his music to work with a team of doctors and psychologists to create a song about suicide prevention, has been actively involved in performing for the underprivileged, and currently runs a free music learning academy where he teaches 17,000 students, many of whom have come from lower socioeconomic status but are now able to make a career out of music to sustain their families. Jahnavi’s mother, Trupti Pandya, is a homemaker lovingly referred to by Jahnavi as “the backbone of my family.”

According to Jahnavi, “The decision to move to a new country—for 5 to 6 years—leaving my family, friends, and my work in India was challenging. However, my parents foresaw that the opportunity of education and experience at the University of Iowa would help me serve in greater magnitude, for the rest of my life. They helped me look within and it helped me make the choice of coming abroad—something I hadn’t dreamt of being able to achieve; and choosing UI in particular—because they were certain that the values here were a perfect match to ours. Their support has helped me follow my passion—psychology—without being influenced by societal expectations (psychology is still looked down upon by many in India). My parents focus on enjoying the process not the outcome and appreciated my efforts, not just the results. They love me for just ‘being’ not ‘doing.’ Their respect for me is sufficient to take failures as nothing but learning experiences... Through my parents I have learned to value and live every moment—without discriminating between happiness and sadness, comfort and struggle, success and failure—neither being attached to the former nor scared of the latter—thus, having humility and acceptance. When I was at home, we lived each moment mindfully: the family dinners, cooking, cleaning, laughing, crying, and even growing together in challenges; and now, here, I am cherishing each moment as I go along.”