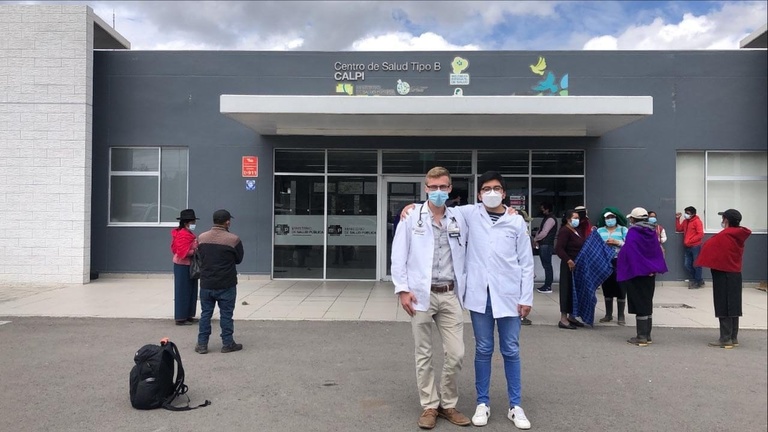 Dr. Alex and I: "Dr. Alex Jiminez was an amazing preceptor while participating in clinical rotations at a Centro de Salud in Riobamba."

“Buenos días. Me llamo Antonio, y soy estudiante de medicina de Estados Unidos. Cómo puedo ayudarle hoy?” So began many appointments during my 8-week global health elective with the Cacha Medical Spanish Institute in Riobamba, Ecuador, last summer. During this time, I explored Ecuador’s healthcare system while working in various clinical contexts, accompanying a sick classmate at the hospital, and making friends with many medical professionals. Living with a host family and developing non-medical friendships also provided insight into the culture and lifestyles of Ecuador. All the while, I was learning and practicing Spanish in the home, clinic, classes, and social spheres. This experience greatly improved my ability to communicate with Spanish-speaking patients, informed my view of the ideal healthcare system, and helped guide my future plans in global health.

"Participation in CACHAMSI was the best possible way I could have spent the summer after my first year of medical school."

The Cacha Medical Spanish Institute (CACHAMSI) is an NGO based in Riobamba, Ecuador, with the dual missions of teaching healthcare professionals medical Spanish and supporting the health needs of Cacha, a local indigenous community. It accomplishes these goals by offering medical Spanish classes and clinic rotations to international healthcare professionals, the fees for which contribute to various community-development projects in Cacha (e.g. English camps for children, health outreach about personal safety to older adults). 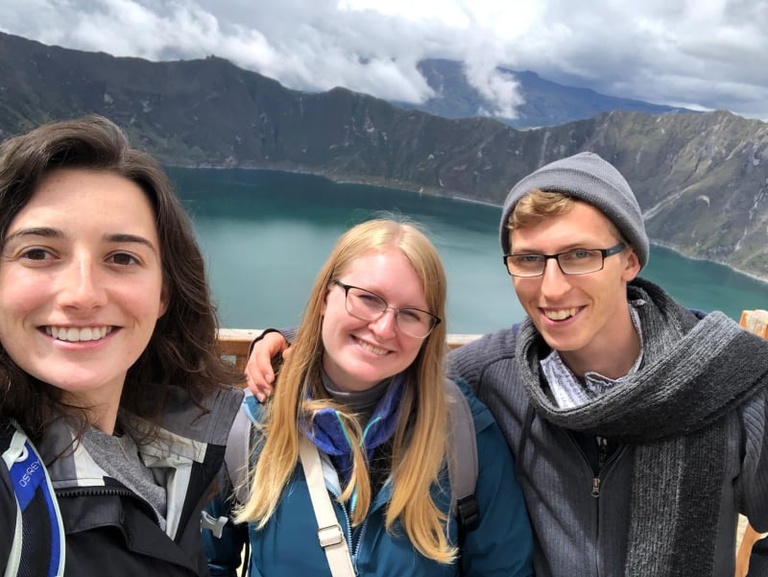 Quilotoa: "A beautiful crater lake my classmates and I visited one weekend."

On a typical day during the CACHAMSI program, I got up at 5 am, did my medical flashcards, and had breakfast with my host family around 7 am before taking a taxi to the morning’s clinical rotation. These clinical rotations were at a variety of locations, including several clinics (“Centro de Salud”), urgent cares, hospitals, and house visits. At the clinic, I would take histories and perform physical exams under direct supervision by the attending physician. Lunch was with my host family at 1 pm, and then I would leave for the afternoon’s Spanish classes, which included lessons on medical vocabulary, grammar, and semantics. After class, my classmates and I would get together at a café to chat and study Spanish homework together before returning to our houses for dinner and rest.

Coming to the program, I had several personal and professional goals. My primary goals were to improve my communication with Spanish-speaking patients and strengthen my history-taking and physical exam skills. Additionally, I sought to widen my perspective of healthcare systems by comparing and contrasting Ecuador’s healthcare system with that of the United States, both as it is experienced by patients and providers. In light of my future career goals in global health, I also aimed to bolster my knowledge of how public health interventions can be used to address underlying social determinants of health in a moderate-income country. CACHAMSI provided me the opportunity to meet all these goals.

As the program progressed, both my general and medical Spanish skills improved dramatically. By the end of the 8-week program, I was able to take full patient histories and perform physical exams in Spanish under a physician’s supervision. During my clinical rotations in the urgent care, I witnessed a variety of medical conditions including many lacerations and fractures (e.g. from kitchen knives and motorcycle accidents), stress headaches, an ectopic pregnancy, a vaginal birth, torticollis, hernia reductions, strokes, hypertensive crises, and situations involving familial abuse. In the clinic, we had a variety of well-child checks, pregnancy checks, sore throats, lipomas, diabetes, gall stones, urinary tract infections, sexually transmitted diseases, rheumatoid and osteoarthritis, sciatica, scoliosis, phimosis, and one gentleman upon whose head a tree branch fell. Thus, I had ample opportunity to practice history-taking in Spanish and physical exam skills for a variety of clinical conditions in a variety of clinical contexts. 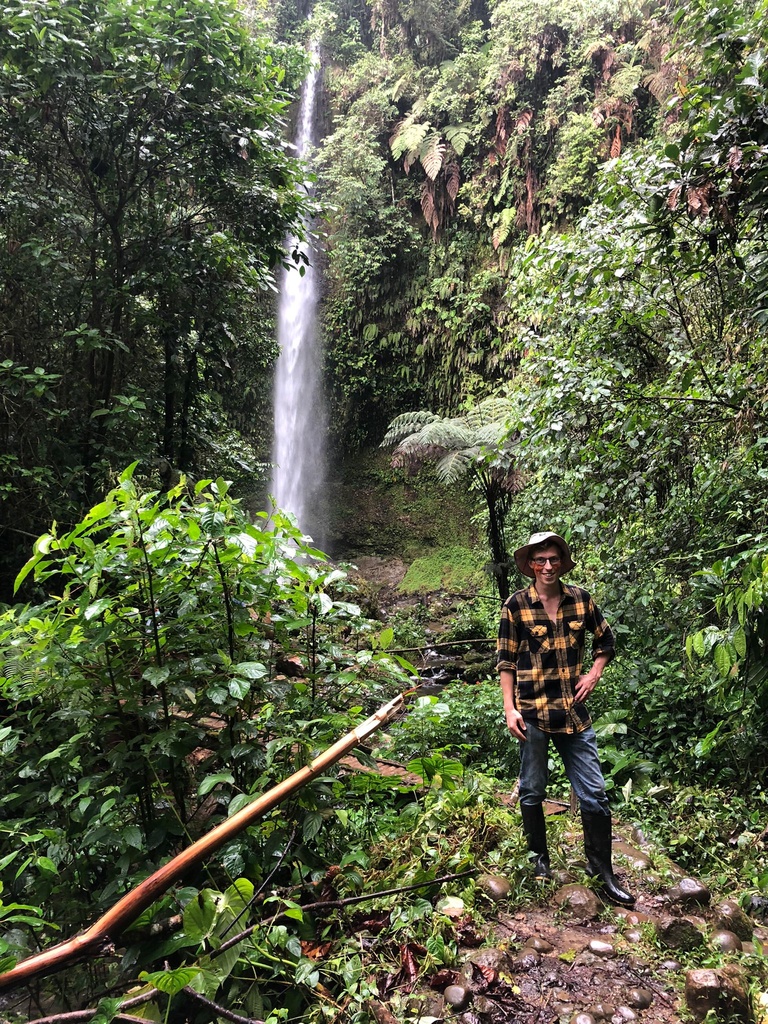 On the edge of the Amazon: "Ecologically diverse, Ecuador's ecosystems range from coastlands along the Pacific to mountain ranges in the Andes to the Amazon rainforest on the Eastern border."

Regarding healthcare systems, I noted a variety of advantages and disadvantages in the Ecuadorian system. The most impressive and admirable aspect of the Ecuadorian system to me was the wide access to primary care. Government-funded public clinics provided primary care to all citizens free of cost. Moreover, doctors at these public clinics were required to do a certain number of house visits in rural areas, with tasks such as administering Covid vaccines or giving vitamin A to promote children’s eyesight development. These measures worked toward adequate primary care for all, including people in low socioeconomic statuses and in rural areas. I think people in the United States would benefit from similarly wide access to care. Unfortunately, access to most specialists required some form of insurance, which the majority of people I saw in the clinic did not own.

"As the program progressed, both my general and medical Spanish skills improved dramatically. By the end of the 8-week program, I was able to take full patient histories and perform physical exams in Spanish under a physician’s supervision."

A couple of challenges in the Ecuadorian system were a lack of resources, inefficiencies with documentation, and dangers with independent labs and pharmacies. While access to the public clinics was free, clinics often lacked important resources for diagnosis and treatment, such as ultrasound machines, CT scanners, medications, and supplies. For instance, a patient with a gaping laceration would have to leave the ER (or call a family member) to buy their own sutures from the pharmacy before we could help them. Patients in automobile accidents were evaluated for cerebral hemorrhage based on physical exam alone at times, without a CT scan. These limited resources do not necessarily represent a flaw in the healthcare system, but rather different government priorities for their limited funds. Inefficiencies with documentation represent another challenge. For each patient, doctors were required to fill out both a paper and electronic medical record, which took substantial time. Additionally, since drug/diagnostic orders were written on paper and given to the patient to carry to the pharmacy/lab, there were sometimes errors in transmission. For instance, one patient was sent to an outside lab for an H. pylori test, but she returned with a CBC, BMP, urinalysis, and no H. pylori test. It is difficult to discern whether this was the result of intentional fraud by the private lab or an error in communication. One other dangerous component of the Ecuadorian system I witnessed was everyone’s open access to all drugs in the pharmacies. No prescription was needed. For this reason, patients would often self-administer antibiotics, leading to poor health outcomes and antibiotic resistance. An instance of a poor health outcome occurred with a 15-year-old male whose parents attempted to administer penicillin through an IV to treat his flu-like symptoms. When they finally went to the hospital a week later, it was found he had leukemia, and he died en route to the specialist later that day. Such is the risk when medical equipment and drugs are freely available to non-medical professionals. These represent some of the challenges to the Ecuadorian healthcare system. 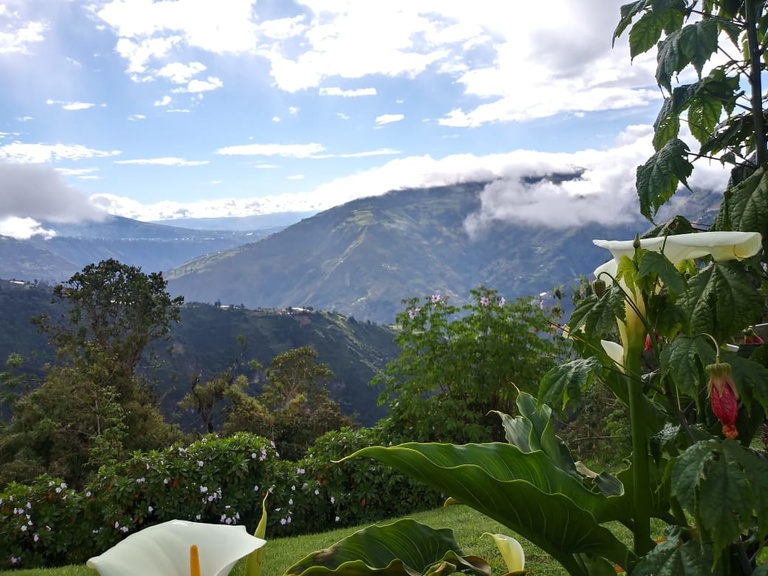 Mountains near Banos: "Ecaudor is filled with enchantingly beautiful mountains, but the ones overlooking the city of Banos are arguably the most incredible."

Participation in CACHAMSI was the best possible way I could have spent the summer after my first year of medical school. By learning medical Spanish, I am able to communicate more personally with my Spanish-speaking patients both in the United States and abroad. Additionally, through comparison and contrast of our healthcare systems, I identified elements of both which contribute to the “ideal” healthcare system, aimed toward better health outcomes of the population. Finally, through personal experience and conversations with medical doctors, I practiced pinpointing areas for future public health campaigns to improve citizens’ general wellbeing. Thus, this experience has been valuable in developing certain skills that will be critical for me as a healthcare provider in the future, as I pursue a career in global health.

University of Iowa student Anthony Young, currently pursuing a doctor of medicine degree at the Carver College of Medicine, participated in an 8-week global health elective at the Cacha Medical Spanish Institute in Ecuador during the summer of 2021.

Anthony Young’s work was overseen by the Office of Global Health Programs in the UI Carver College of Medicine and made possible by the generosity of fellowships provided through the Robert and Marion Freeman family and Dr. Nancy Lynch to support medical students working to address health inequities. To learn more about our work in Global Health,  please contact robin-paetzold@uiowa.edu.