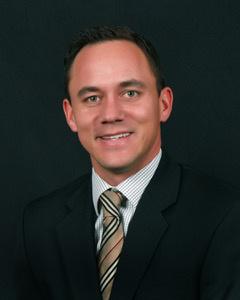 David Doughty (BA political science ’03), senior associate attorney with Janeway Law Firm in Lone Tree, Colorado, says that his study abroad experience in San Sebastian, Spain, was the best thing he did during his undergraduate academic career at Iowa. We caught up with David to learn more about what he gained as a result of his study abroad experience and how it has shaped him personally and professionally.

You studied abroad through the USAC program in San Sebastian, Spain. Can you tell us about your experience?

Overall the experience was great. I was in San Sebastian for five to six weeks. I only took one class, Spanish, but in that month, I learned more Spanish than I did taking four years in high school. Our teacher only spoke to us in Spanish. By the time I was ready to leave I could converse pretty well in Spanish. It’s amazing how quickly that can happen. San Sebastian is a charming town on the northern coast of Spain near the French border. I lived in an apartment with two guys from Xavier University. One of them was Nicaraguan and spoke fluent Spanish, which helped immensely.

You mentioned that your study abroad experience was the best thing you did in your four years at Iowa. Can you say more about that?

It was something that I never considered. Luckily a co-worker conveyed his experience in San Sebastian and he recommended it to me. The program opened my eyes to the world. Traveling to another country, living there for a period of time, and becoming immersed in the Spanish culture. I definitely had “culture shock” initially but quickly got over it. I met new people, mostly Americans from other universities, but some from Spain and other European countries as well. Overall it cast the world in a new light and helped shape my perspectives. That’s not so say my experience at Iowa otherwise wasn’t great, it was, but traveling to Spain and spending time there stood out above everything else. 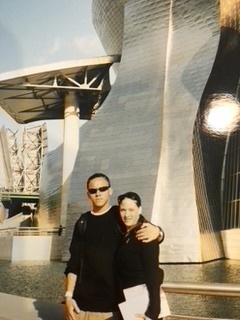 David Doughty with a friend in Bilbao, Spain

What did you gain as a result of your study abroad experience personally?

It broadened my horizons and made me a more well-rounded person. It also encouraged me to travel more, and I have. Since that experience, I have now been to back to Europe three times (including back to Spain) and have traveled to seven other countries, with plans to head back to Europe next year.

What are some of your favorite memories from your study abroad experience in Spain?

The beauty of San Sebastian and the Bay of Biscay. Learning about Spanish history. Walking to class every morning, the smell of all the fresh pastry and bread shops, and the food generally. The laid-back nature of the culture. Meeting new people from around the world.

Can you tell us about the kind of work you do as an attorney in Lone Tree, Colorado?

I am a senior associate attorney with Janeway Law Firm. We are a creditor’s rights law firm specializing in real estate, bankruptcy and litigation. It is a relatively small law firm but we have recently expanded to four other western states. I have practiced for 12 years.

Is there any advice you would like to give to current UI students?

I strongly recommend a study abroad program. It will make you a better, more well-rounded student and person. It will be one of the best things you do at Iowa. My program was five to six weeks. In hindsight, I would’ve done a full summer and spent more time traveling around Europe. I may have even considered a full semester, but it is worth a month at the very least.