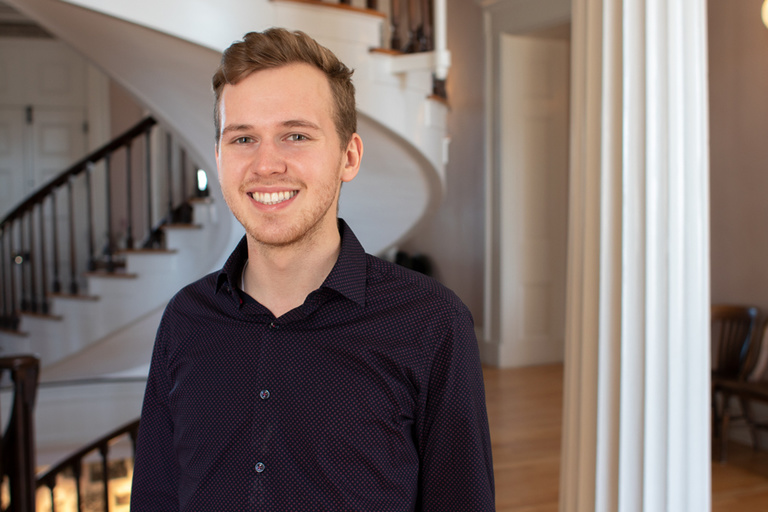 Alex Bare, a native of Walcott, Iowa, who will receive a BA in international relations this May from the University of Iowa, has been awarded two prestigious international scholarships: a 2019 U.S. Department of State Critical Language Scholarship (CLS) and a 2019-20 Fulbright English Teaching Assistantship (ETA) Award to Colombia. With his CLS, Bare will travel to Tangier this summer to live with a host family and study at the Arab American Language Institute in Morocco (AALIM). After which, with his Fulbright ETA Award, Bare will travel to Colombia for the 2019-20 academic year to teach English and work closely with local university students to write journalistic stories for publication in one of Colombia’s English-language newspapers.

Were there experiences at the UI that inspired you to pursue a Fulbright?

I’ve known I was going to apply for a Fulbright since I studied in Cochabamba, Bolivia in the fall semester of my sophomore year. While in Bolivia, I did an independent research project on the country’s Gender Identity Law 807, which led me to travel to five cities across the country interviewing lawyers, activists, sex workers, and political figures. I am forever grateful to that experience for making me realize the power of storytelling, especially when you can understand the language of another person. That idea sat with me and developed while I took the University of Iowa's Spanish journalism course with Horacio Castellanos Moya, who is said by many to be the most renowned Salvadorian writer alive (although he will never say it himself).

In December 2017, I traveled to Colombia with a good friend of mine whose family lives there. There, I had a chance encounter with a group of Venezuelans who had recently crossed the border to Colombia and shared with me surreal stories of their experiences in a Venezuela facing a crisis of astronomical proportions and as foreigners facing exploitation in Colombia. With their permission, I worked with an English language newspaper based in Colombia to publish their stories. This was the experience that pushed me towards pursuing the Fulbright English Teaching Assistantship position specifically.

What drew you to study Arabic?

I have been drawn to Arabic ever since third grade when my mom let me pick out any music CD in Barnes and Noble and I selected “Now That’s What I Call Arabia 5.” Which came complete with the biggest hits across the Arab world in 2003. I particularly had an attachment to Egyptian singer Sherine and saved up to buy a laminated card with 500 useful Arabic words, which at some point I memorized.

I kind of forgot about my love for Arabic until I got to college and realized it was an option for my minor and immediately signed up. I think it is so important nowadays that people not only understand the political history of the Arab world but its linguistic and cultural heritage. It’s too easy to throw your hands up and say it’s too complicated of a region that you’ll never understand, but you would be amazed how much is revealed by asking Iraqis how they really felt about the U.S. occupation and its aftermath or chatting with Omanis about their attitudes on religion and morality in their native language.

What advice do you have for future students interested in applying for a Fulbright or CLS?

Like so many other things I have applied for, the first two times I applied to CLS I didn’t even make it to the semi-finalist round. To have studied on a CLS scholarship in Oman last summer and now in Morocco is everything first-year me could have dreamed of and I am so happy I never gave up. Keep going back to Karen Wachsmuth (in International Programs) to bother her about another program you want to apply for. Trust me, she likes it when you turn into a serial scholarship/fellowship applicant!

Are there individuals (professors, mentors, etc.) you'd like to thank for their investment in this process?

I have always been interested in the world outside the United States since I was a second grader in Pat Oster’s class at Edward White Elementary School in Eldridge, Iowa, and Kandis Konrardy, who was still a student teacher when she taught my fourth-grade class, but vigorously supported my aspirations.

It goes without saying that Dr. Karen Wachsmuth in International Programs is your #1 resource for international grants! The editing process is hectic, demanding, and reviewers may have contradictory critiques—but your essays will be steel titanium by the time you’re done.  Whether it’s CLS, Fulbright, or Boren, Karen and her incredible team will get you through.

At the University of Iowa, I am forever thankful for Professor Ahmed Souaiaia, who introduced me to a nuanced understanding of the Arab and Islamic worlds that goes far beyond the headlines. Iowa’s very own Fulbright Arabic instructors from Tunisia, Jordan, and Morocco have been incredible—particularly Amira Rammah, whose Elementary Arabic I course was the first university class I ever had. Despite returning to her native Tunisia a couple of years back, she has consistently written me recommendations all four times I applied for the Critical Language Scholarship without fail. For the Fulbright, I also have all of the staff of the University of Iowa Study Abroad office to thank, and professors Mercedes Niño Murcia and Ana Rodríguez Rodríguez for their remarkable class discussions and even more wonderful office hours. Thank you so much for everything—it has made my time at Iowa all the more worth it.

Explore the many funding opportunities open to UI students and alumni

Students are encouraged to begin their funding searches and applications at least six months to one year in advance.  Schedule an advising appointment with Karen Wachsmuth to discuss your interest in an international fellowship or begin an application (as a UI undergraduate student, graduate student, or alumna/us).