Food in France (a love letter to baguettes) 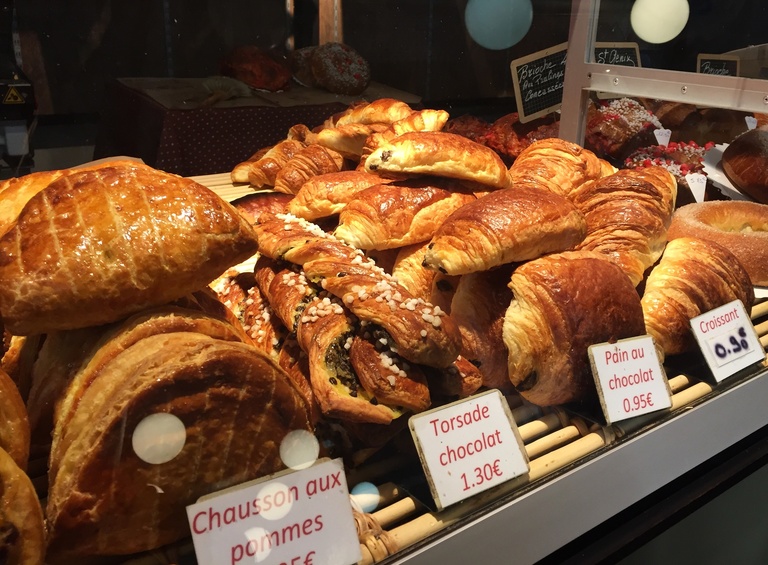 In the movies, there are always scenes of French bakeries. I once thought these movies to be unrealistic, but no: French bakeries really do look (and smell) like heaven.

I’m living in a country with some of the best cuisine in the world, so why am I craving pancakes?

It has to be said: French food is amazing. The Savoie region of France- what I've started referring to as my region of France- is well-known for its raclette, a kind of cheese that is heated and melted onto bread or potatoes, and its tartiflette, a potato and cheese dish that now features heavily in my daydreams. Local boulangeries and patisseries on every corner serve fresh bread and pastries; hardly a single day has gone by that I haven't treated myself to a baguette or a macaron. I could probably write an entire book of sonnets about my undying love for fresh baguettes, but for all our sakes, I'll refrain from doing so.

Restaurants in France are, unsurprisingly, pretty great too. Meals here last much longer than they do in the states. If I'm eating at a restaurant with a group of friends, I expect to stay there well into the night. My lunch breaks during the school day are an hour and a half long, which gives me enough time to eat and chat with friends without feeling rushed. At Iowa, I've had days in which I didn't even bother to give myself a lunch break, instead living off granola bars and snacks. I don't think I'll be able to go back to that, not when I plan to spend the next few months savoring every minute of my lunch break. Most students eat on campus at the campus restaurant, which is cheap and offers pretty good food. I pack my lunches most days, since I like to eat outside to enjoy the good weather and beautiful views.

My first trip to a full-size grocery store in France was a surreal, almost religious experience. I had a hard time explaining it to other people: there’s no way to translate #blessed into French. I make about five or six trips to the grocery store every week to pick up fresh fruits and veggies, and I cook most of my own meals in my tiny kitchen. It's much cheaper to prepare my own food, so I save the trips to restaurants for when I'm with friends or when I'm traveling. 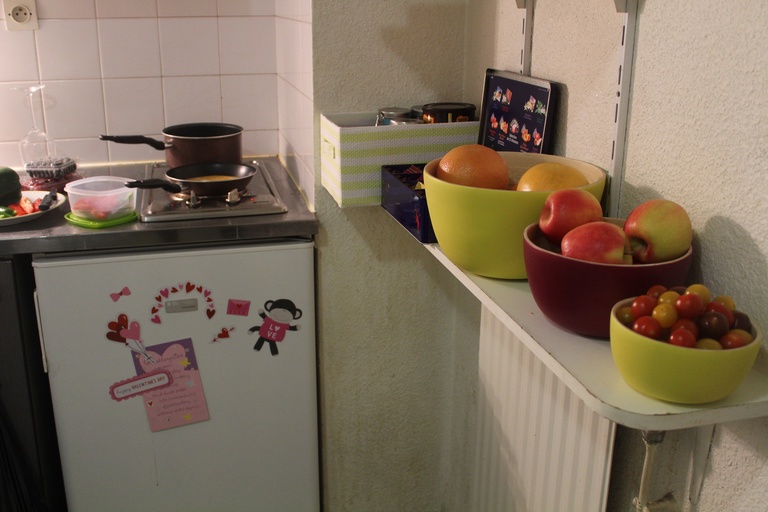 My apartment's kitchen is tiny and kind of dingy, but it works! I don't have an oven or a microwave, but I'm able to get by with a stove pretty easily.

I've been operating under the belief that balance is key: I love food and I love working out, so I eat well and work out pretty regularly at a gym in town. I've also been trying to adopt some of the same eating habits as my French peers. I grew up eating dinner around 5 PM, but in France, it's rare for me to eat before 7:30 PM. I originally thought I'd mind this, but it was the easiest switch in the world to make, and I find myself loving the French schedule. Similarly, when I first came to France, I'd been a vegetarian for over ten years. I'm happy to report that in the spirit of keeping an open mind, I've been trying a few meat dishes here and there and really enjoying them. When in France, right?

Despite all these amazing French foods, I spent a lot of my first month here daydreaming about American food: Panera mac and cheese, Steak and Shake fries, and crunchy peanut butter. Whenever I meet another American, one of the first things that inevitably comes up is how much we miss American food. This strikes me as a little ridiculous, because back in the states, I spend most of my time seeking out food from other countries. I will say that it is tougher to get a good mix of foods. In Iowa City, I can find Indian food, Chinese food, and Mexican food all within a block of each other, but in France, it's difficult to track down some of these options that I've grown up loving. 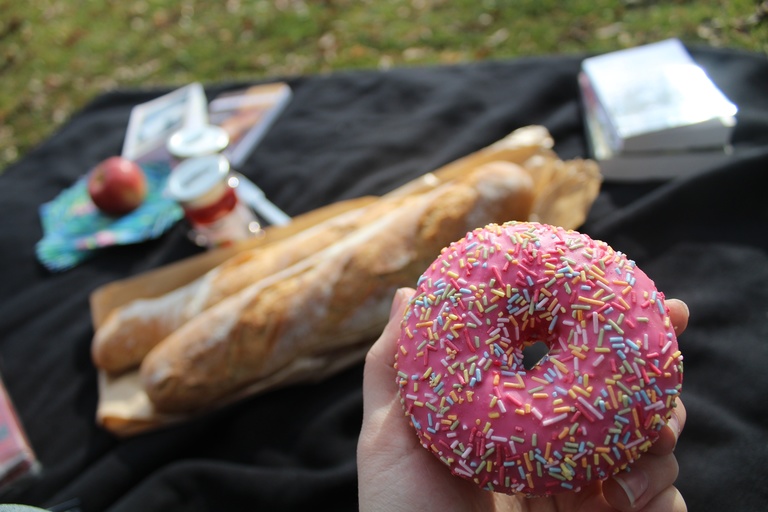 Donuts are a surprisingly popular treat in France. They make great picnic food!

Food and comfort go hand-in-hand, especially in such an unfamiliar environment, so it's nice to make pancakes from time to time or to have a Southern comfort food night once in a while with some of my American friends. I spent too much time wondering why France doesn’t have the same foods or customs as the United States does, before realizing that I was simply experiencing homesickness. That said, missing the United States shouldn't stop me from enjoying the amazing French cuisine while I'm here. There’s a difference between noticing interesting cultural differences and being judgmental, and it’s important for every study abroad student to realize that. There are a million new and delicious French foods to try here, and there’s no point lamenting the fact that s’mores aren’t a big deal in France or that hot chocolate mix is really hard to find. Some advice to other Americans fantasizing about American comfort food: Try new things! You'll be able to go back to your Oreos and mac and cheese soon enough.

*Lauren Gentile is a sophomore at the University of Iowa studying French with minors in Arabic and Latin. A native of Ames, IA, she will be spending her semester in Chambéry, France on the ISEP Exchange Program at l’Université Savoie Mont Blanc.