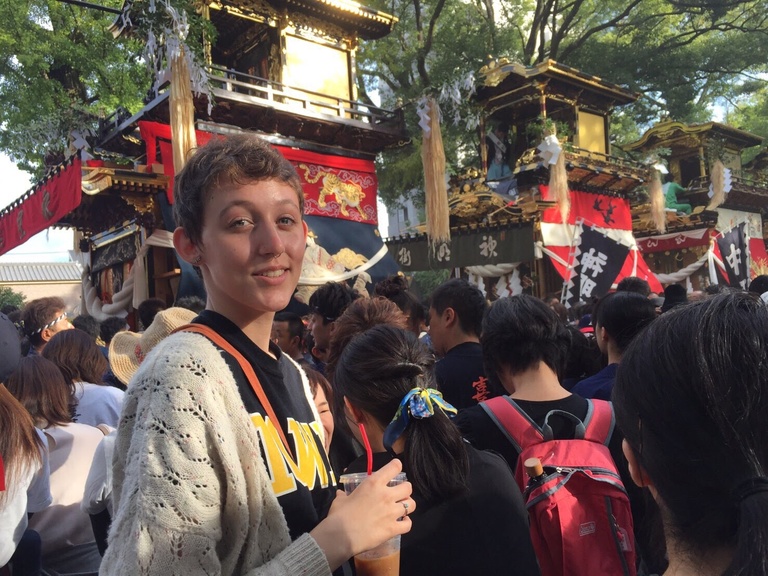 Koromo Matsuri is the name for the festival special to Toyota City. Before it was Toyota, of course, it was called Koromo. This festival is the celebration of the city, which includes a parade of 8 floats, each one representative of a district or neighborhood within the city.

Things began in a shrine where billowing tents, fried food, and people young and old were packed in. It was noisy, crowded, smelled delicious, and the main event was the center of it all—a big, open space where the 8 floats were resting.

Groups of particularly enthusiastic men, some with painted faces, others downing bottles of sake, were closest to these floats. They sang together in huddled circles, and at one point someone broke out a trumpet. While all of this was happening, and we (host mom and I) were admiring the floats, at the back of my head I remember thinking that at some point the floats would move someplace. Although, I didn’t know how or when yet.

As the enthusiastic men started climbing all over the floats and continuing their singing on top of them, I felt that that time was drawing near. My host mom started asking me if I wanted to “pull the rope.” Politely, I said no, that it was OK. I didn’t necessarily need to pull a rope. Then again, I didn’t know what “pulling the rope” meant. What I thought she was suggesting was taking a picture of me holding the rope that I figured was used to maneuver the float in some way. 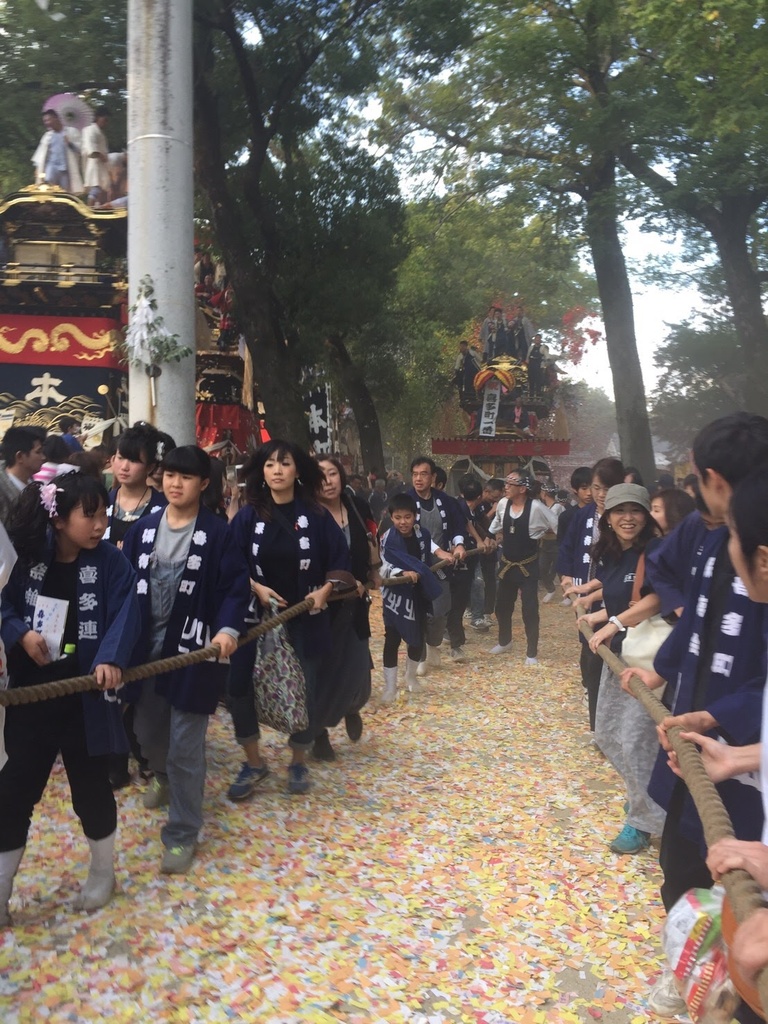 Finally, she said if I did it, she would do it, too. Up until it was too late to turn back, I had no idea what was in store for me.

While we stood in an endless line of people, all of us holding rope attached to the first float, my host mom said, “If you get scared, let go of the rope.” And of course, I didn’t know what that meant, either. I just thought she was being considerate, since the rope was rough, and there was a lot of tugging and pulling involved.

But you see, right from the get-go, the float had to go around a corner. What I didn’t realize was that in pulling them around corners, you had to pick up considerable speed. These floats are ancient—they don’t have engines. It’s not like you can turn a steering wheel or put on the brakes. They’re entirely motivated by a mass of people (and a lot of rope). Coming around a tight corner, the float cannot slow down—otherwise it would fall over.

People from behind me started shouting “run,” and never in my life was I so aware of the danger in getting trampled. While we were running for the first time (and we had to run 3 times), my host mom told me to look back. I managed to glance over my shoulder, and to my horror saw the magnificent, beautifully decorated float, with men still on top of and hanging from it, throwing confetti, barreling toward us at an alarming speed. It was kind of hard to admire it then, since it seemed we were literally running for our lives.

Although I probably wouldn’t do it again, I’m proud that I did do it. I never let go of the rope once. And to think, I declined the offer at first. If my host mother hadn’t been persistent, I wouldn’t have experienced any of it—running with dozens of other people, laughing in moments that terrified me, looking at my beet red hands and shaking. I wouldn’t have such a thrilling story that now I’ll treasure. When the parade was over, and my heart still pounding, I felt overwhelmed with happiness.

Surely it has something to do with being able to say, unapologetically, “I did that. And it was awesome.”