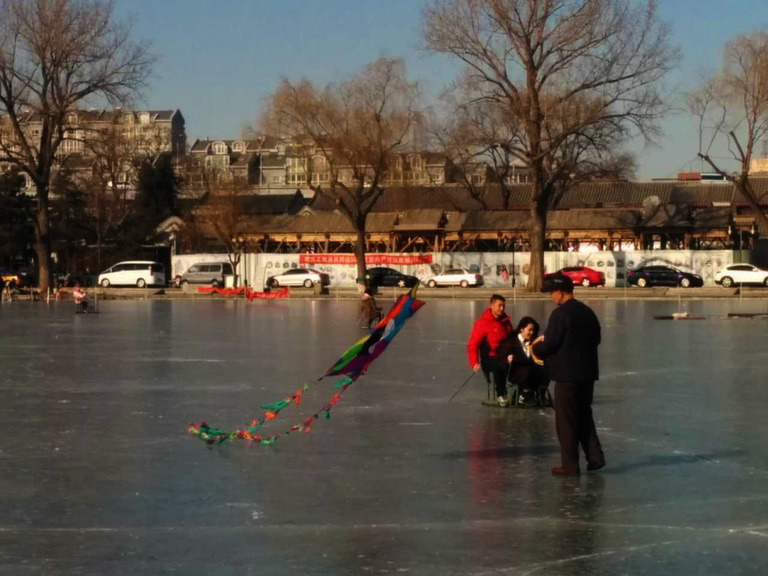 Kites and chair-skis on the Chinese New Year

Of Houhai and Hutongs

On the way to Houhai, the streets are empty, the crowds are sparse, the city is hollow. The street vendors left a week earlier to villages and families they visit once a year. The office workers have just left, most visit families, some avoid families by visiting other places. The bosses are fishing on an unnamed island. Houhai is an island of ice in an ocean of cement. The name, translated directly, means either a queen ocean or backward ocean. Today, it is majestic. Usually, it is a touristy with inflated prices for food and drink. Today, it is frozen, yet alive just the same. Kites, auspiciously red, float overhead. Kids glide ungracefully across the ice in makeshift chair-skis. Old ladies stretch before diving into freezing water. On land, one couple contemplates Chinese chess, another plays ping pong. The locals have taken back the city. Everyone follows the scent of rest and warmth and stinky tofu to the hutongs, the charming alleys who dominated the Beijing of many new years past. A chocolate art salon sells pieces in the form of Kamasutra poses. Hidden away in the side alleys, shadow puppetry harks the Year of the Monkey, bringing a play about the Monkey King to life. In the fall, vendors selling sprout-shaped head ornaments proliferated throughout the alleys. Now, the fashion fad has faded, but the smell of stinky tofu remains.

Of Fireworks and Fortune

Those who remain with the tofu search for the noise. They are the ones left behind by the world’s largest annual migration. When 300 million Chinese travel home and away, the stragglers who stay can only congregate. Sound and fury and fireworks are better experienced with others than alone. At a rooftop party, the lingua franca is English. The drink of choice is mulled wine, not the 54% alcohol content spirits preferred by the Chinese. Two blocks away, a lone man sets off a long string of firecrackers in the middle of an intersection. They are meant to be heard not seen, to scare off ghosts rather than please human eyes. Listen to the signals behind the noise. The only sound as relentless as the fireworks is that of people wishing each other gongxifacai, congratulations and get rich. The food arrives. Dinner is frozen dumplings – auspicious for their ingot shape – and fish – auspicious because it is homophonic with abundance. The Chinese don’t want to eat the rich. They want to ingest richness. New years bring new ways to eat, and now ingestion can take place through WeChat, the stinky tofu of social media and the power source behind China’s 540-percent-bigger-than-the-U.S. mobile commerce market. Traditionally given at new year, red envelopes – hongbao – were once folded and handed to their receivers. This year, over 500 million people texted hongbao through WeChat. Some of them are guys who think their hongbao means the start of a new year of love. Some of them are girls who just think it’s a good start. A hongbao is necessary but not sufficient. It doesn’t guarantee love, but the lack of one guarantees no love. Congratulations on making it to another year, to a certain tier in the game of life and love. Now go get richer.

Of Temples and Time

The Temple of Earth fair is located on Peace Street. The Uber driver gives a history lesson on Destroy the Four Olds, a Cultural Revolution campaign that desecrated Chinese temples and outlawed temple fairs. Then he gives a cooking lesson on different methods for making yuanxiao, sticky rice dumplings eaten on the Lantern Festival marking the end of the New Year celebrations. The temple fair is a lesson on Chinese religion. To get to the temple, where ancient Chinese sacrificed to the village God, follow the crowd through the fair. Traditional handcrafts, skeleton drawings, clay sculptures, stuffed monkeys, a Taiwan fruits ice cream bar, a China Mobile stand, teenagers reminding each other “don’t eat it yet, let’s take a picture of it.” Even a row of carnival games taken from a state fair where “Bang Bang” by Jessie J plays in the background. A short detour away, old people sing along to an old Northern Chinese song in a voice that deepens the song’s meanings even if the lyrics are difficult to understand. Kids sit on top of fathers’ heads.

On the way back home, a middle-aged woman gets off the train and waits for one going the other direction. A kid, tired of shopping with her parents, rides the escalator up and then back down. Flanked on each side by grandparents, a boy is free to lazily drag his feet as he crosses the empty crosswalk. An old man and old woman meet for the first time. He says he is 87. With a self-assuredness that has aged gracefully, she brags that she is way older than him. She is 90.

Happy New Year in Chinese is xinnian kuaile, which means nothing at all and everything all at once.

*​Jeffrey Ding is a senior from Iowa City, Iowa, studying political science, economics, and Asian languages and literatures at the University of Iowa. He spent last fall in Beijing, China, on the CIEE Advanced Chinese Studies program and continues to live there this semester as he pursues an internship funded by a Boren Scholarship.