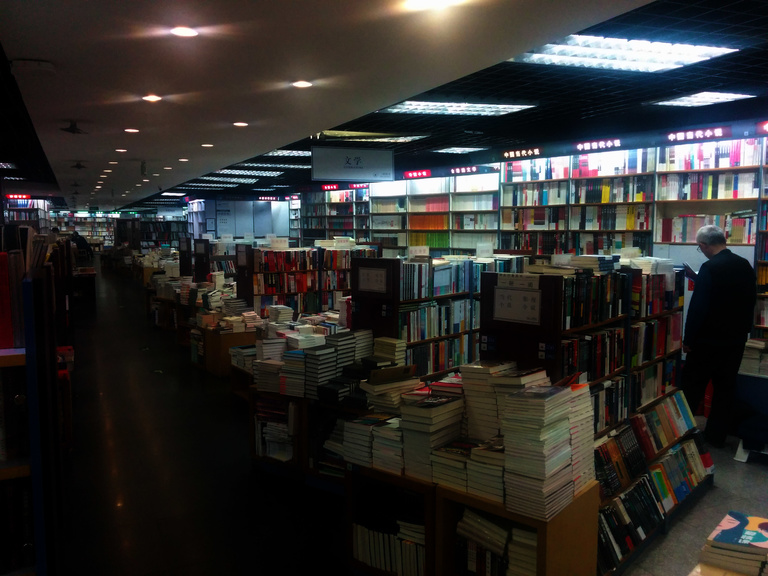 Basement of Sanlian Tanfen Bookstore at 2 a.m. on a Saturday night

What I love about bookstores is their capacity to support lingering. At nightclubs, lingering is considered creepy; instead, one most constantly catch up – with regards to alcohol consumption, the dance beat, and others through incoherent screaming exchanges. But at a bookstore, lingering is encouraged. And at Sanlian Taofen Bookstore, one can linger all night.

Built on East Art Gallery Street in 1996, the 24-hour bookstore is known by many readers as their “spiritual home” and a place in which to soak for an entire day. A bubble bath of 90,000 books stacked in a space of 1400 square meters. There are at least twenty different annotated versions of Journey to the West, one of the four great classical novels of China. A 513-page guide to polyphonic Mandarin characters can be found in an aisle devoted to dictionaries. Copies of Kazuo Ishiguro’s The Buried Giant are tucked away in random nooks. Books with titles like The Story of Art and The Story of Time convey the immense ambition in this place.

Indeed, a 24-hour bookstore in the digital age is an audacious endeavor. Barnes & Nobles is downsizing, independent booksellers are closing, and the Internet is a thing. But Fan Xi’an, general manager of Sanlian, found inspiration from Taiwan’s hugely successful Eslite, which operates over 40 stores in Taiwan, two in Hong Kong, and recently opened one in China. One of every four visitors to Taiwan visits an Eslite Bookstore, according to the firm.i As is the case for Sanlian, books account for less than half of Eslite’s revenues. The rest come from cafés and cultural events that attract Taiwanese who come to socialize and sip coffee.

In the Sanlian’s upstairs café (banana chocolate waffles for 48RMB!), there is not much socializing. While some Eslite’s are located near clubs and bars, Sanlian is isolated. It is no surprise that Gabriel García Márquez’ 100 Years of Solitude, located in the foreign novels section, and Bertrand Russell’s The Spirit of Solitude, placed in the Western philosophy aisle are very popular picks. So it is much more difficult to read the people. Why is that old man reading a book while standing when there is a comfortable stool right next to him? What is the girl slumped in the corner of world history and economics dreaming about?

Answers can be discovered in the message board left by happy readers. Some talk about turning their life around through reading more and studying harder. Some say this is their favorite place in Beijing. But my favorite message is one from Victoria penned just a week ago. The pink sticky note reads, “Eat more, sleep more, read more.” It’s the nerd’s version of work hard, play hard. It makes sense to me. We have 24-hour fast food chains for people who need to eat more and 24-hour hotels for those who need to sleep more, so why not 24-hour bookstores for the ones who need to read more? 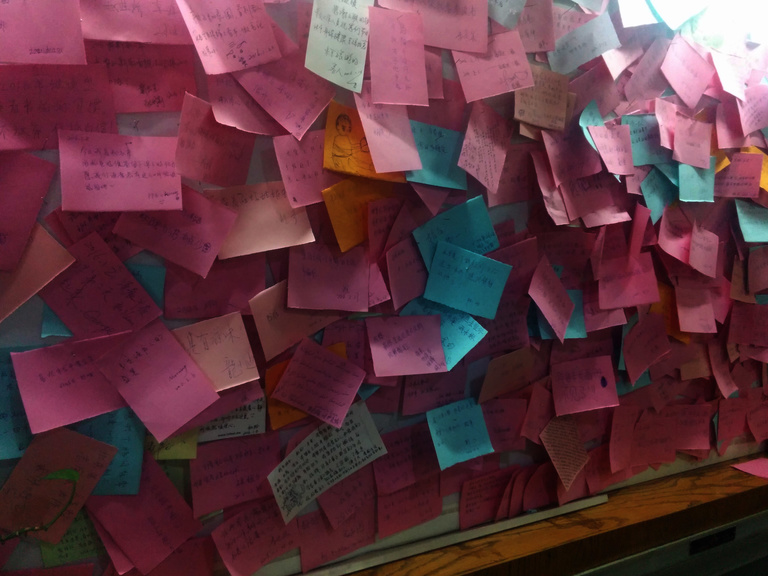 The bookstore's message board

On the taxi ride back, I ask the taxi driver if he has ever visited Sanlian’s never-closed store. He shakes his head and questions why such a thing would exist. It’s a stark reminder that some do not have the luxury of lounging in a bookstore. Reality sinks in a little more when you read articles about China’s crackdown on bookshops and publishers, especially those in Hong Kong. You recall that one time when you tried to start a “Read-a-book-every-two-weeks” online book club, which dissolved with a whimper.

But in the moment before those thoughts harden, you imagine yourself back in that reader’s paradise. Maybe the college student reading on the stairs because all the desks have been taken up could be the one to write the next great Chinese novel. Maybe it could even be you. Maybe these 24-hour bookstores will flourish in China, and the literary scene will rival that of Paris in the 1920s. Staying in that moment, you turn the page. Maybe Chinese literature is already flourishing, but we don’t appreciate it because Western exposure is mediated by political incentives to only promote works that criticize Chinese society. But maybe Chinese society should recognize that many of these criticisms are legitimate. Maybe both of those previous sentences can be true at the some time, and more people will read more books and embrace more competing viewpoints. And in that moment, you hope the book ends with people seeing that the truth is not found through closing ourselves in a bubble but rather by opening ourselves up to a bubble bath of books.

*​Jeffrey Ding is a senior from Iowa City, Iowa, studying political science, economics, and Asian languages and literatures at the University of Iowa. He spent last fall in Beijing, China, on the CIEE Advanced Chinese Studies program and continues to live there this semester as he pursues an internship funded by a Boren Scholarship.