Embark on a cinematic world tour 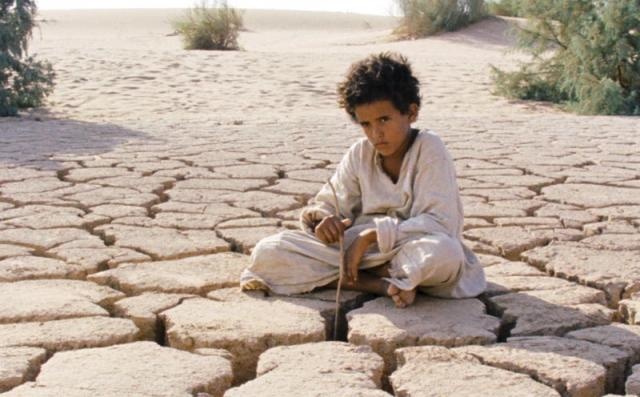 The film "Theeb," about a young Bedouin boy who makes a perilous journey across the desert, is part of the Bijou Horizons series, a world cinema series that brings awareness to diverse cultures through film. Admission is free for UI students. Image courtesy of FilmScene.

“I am acquainted with a decent number of Iranians, and the culture has always interested me,” says the 19-year-old freshman from Walcott, Iowa. “To see the ways people in Iran are able to express themselves freely, often times at great risk, was stunning.”

The documentary-style film was shot from the angle of a dash cam video recorder in a taxicab in Tehran, with passengers sharing candid confessions.

The film ignited Bare’s interest in studying abroad, especially because he is majoring in international relations and linguistics.

Bare and UI student Emily Anderson are the first two recipients of $1,500 scholarships that will support their study abroad experiences after they participated in the Bijou Horizons at FilmScene film series last year.

Bare will travel to Cochabamba, Bolivia, through the School for International Training’s Bolivia: Multiculturalism, Globalization, and Social Change program next fall.

Anderson, a UI junior communication major from Carroll, Iowa, is studying abroad this semester at Radboud University in Nijmegen, the Netherlands, through the International Student Exchange Program.

UI students get a passport at their first Horizons show. Students who stamp their passport at all five regular-series shows—or an extra-credit show—throughout the semester are eligible for a scholarship. Admission is free for UI students with an ID and $5 for the general public.

UI International Programs, the home of Study Abroad, provides the scholarship to one student each semester, chosen via drawing from the pool of students who’ve attended each of the screenings. A FilmScene donor also provides round-trip airfare.

The series debuts Feb. 9, with the movie Theeb. See this spring’s lineup at the FilmScene website.

UI International Programs Communications and Relations Director Joan Kjaer says this is another opportunity to provide an international-education experience to UI students.

Film also has the power to help dispel stereotypes and expand horizons, she adds.

“The film Taxi gave me a great appreciation for Iranians and showed their country is not as backward as many Americans would believe after relentless media representation of Iranians as extremists,” Bare says.

He adds that even though the film is not directly connected to his fall study abroad trip in Bolivia, it has had a definite impact on his major and future career plans.

“It really inspired me to learn more about Islamic society and got me thinking more about my plans to go to the Middle East down the road,” says Bare, who plans to pursue graduate work at Georgetown University in Washington, D.C., and has also applied for a prestigious government scholarship to study Arabic in the Middle East this summer.

Whereas Bare has traveled to England, Belgium, and France, this will be Anderson’s first experience abroad.

“I decided to participate in the film series because it sounded like a fun and interesting way to apply for a scholarship,” says Anderson, who plans to work in international marketing and advertising. “I enjoyed learning about other cultures through their films. I always wanted to study abroad, but this film series really helped to make it possible.”

Anderson says she was most influenced by the films Wild Tales, an Argentine–Spanish black comedy, and Zero Motivation, a film about female Israeli soldiers.

“These two movies showed me that other countries do have a different sense of humor than I am used to. That took me a while to adjust to but was really enjoyable to watch,” she says.

Anderson adds that the experience will have a very positive impact on her future plans.

“Advertising and marketing are fields where you have to get the attention of people from many different backgrounds,” she says. “Studying abroad will allow me to meet many people from different places and learn from these experiences to better engage a more diverse audience.”

Around the world in film

Michael Davis, Bijou Film Board executive director and a doctoral student in mass communications from Iowa City, says a Horizons committee selects the films in the series, focusing on diversity of film and areas of representation.

“There is a rich film culture across the world, which we feel like the students on this campus should be able to experience,” he says. “Many of them have experienced European cinema, but there is so much more to enjoy from the Middle East, Asia, and Africa. We do our best to diversify our programming to reflect the unique work from around the world."

The idea for the series and the tie-in with study abroad came from FilmScene and Bijou staff, says Kjaer.

“We all believed that the opportunity to experience a wide range of international films would open windows into the larger world for UI students and trigger or deepen their interest in study abroad,” Kjaer says.

Autumn Tallman, associate director of UI Study Abroad, says that a study abroad experience can give a student so much more than they bargained for because a student’s character can be developed through the experience in unanticipated ways.

“Study abroad is one of the key ways in which individuals can engage in citizen diplomacy outside the national borders of their home country,” Tallman says. “It is an excellent way to test what we believe to be fundamentally true about the human condition against the reality of other perspectives and vantage points.”

Tallman says that students who study abroad for longer periods of time, like Bare and Anderson, can also gain specific skills that are very desirable for future employers.

Cinema can have a lasting impact and inspire greater curiosity about the world.

“Films have a unique ability to educate and inspire empathy, as open doors to worlds and lives we otherwise may never be given such a lens to understand,” says Joe Tiefenthaler, FilmScene executive director. “And in a world so potently available, so easily dismissed on smaller screens, what better time than now to establish and support a program like this?”