Lighting up the IC sky 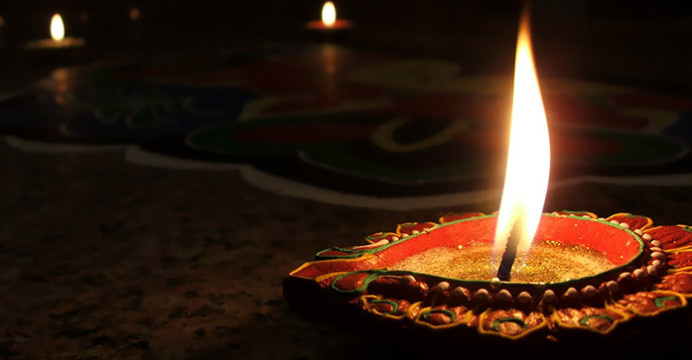 One of the most colorful events on campus is just around the corner.

The University of Iowa Indian Student Alliance will host Diwali 2015, the traditional Indian festival of lights, from 5:30 p.m. to 10 p.m. at the IMU this Saturday.

Traditionally a religious celebration, Diwali is celebrated during the Hindu month of Kartika. The festival commemorates the victory of light over darkness by bringing friends and families together to celebrate.

“There’s a satellite image of Diwali at night, and it’s a thousand times brighter than the regular night in India,” he said. “The whole country is just completely lit up.”

Patel said although Diwali is connected to Hinduism it is also an all-inclusive cultural event about morality that brings out the best in a person.

Sharmista Venkat, vice president of the UI Indian Student Alliance, said the student organization is expecting around 700 guests this year, and the event includes an authentic Indian dinner and cultural show featuring Indian performances from both UI students and community members.

“We just want to spread cultural diversity and awareness,” she said. “We really want to be inclusive of our festivals and share that.”

Venkat said one of this year’s performances would include a classical dance called Bharatanatyam, a dance usually performed at celebrations, known for its grace and elegance.

Iowa Agni, a South Asian music club at the UI, will perform two songs during the night, said Sindhu Gollapudi, one of the music directors for the group.

“It took about two to three weeks to perfect our songs,” she said.

Venkat said the new features of this year’s event include giving away raffle tickets and a new menu from Haveli Indian Cuisine at Coralville.

“We’re doing raffle prizes up this year, so we’re going to be auctioning off free Nachte and Gathe tickets,” she said. “We’re also giving away cash prizes.”

Nachte and Gathe Raho are singing and dance competitions featuring teams from universities around the nation.

Sangwoo Han, a senior at the UI who attended the last two Diwali events, said he will go to this year’s event on Saturday.

“It was my first experience in Indian culture,” he said. “I had Indian food that I’ve never had before and heard Indian songs that were brand-new to me.”

He said he believes people should go to the event because the world is a diverse place and everyone should be aware — to some extent — of other people’s culture.

“Who knows — perhaps they’ll fall in love with it, ” Han said.