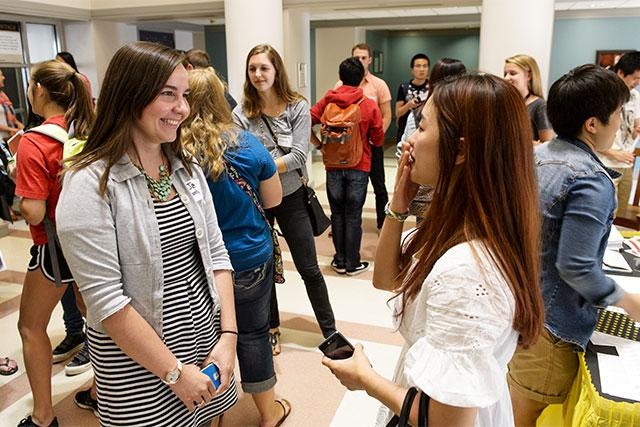 University of Iowa students chat through the International Buddies at Tippie program, one of several initiatives at the UI designed for students from U.S. states and students from other countries to meet, allowing them to share cultural experiences and helping international students adapt to campus life. File photo by Tom Jorgensen.

The University of Iowa has the 47th-highest international student enrollment in the nation, out of 1,485 higher education institutions in 2014–15, according to data released Nov. 16 as part of the Open Doors Report.

“We are proud that the University of Iowa continues to be a destination for students from around the world who recognize our world-class academic excellence in programs ranging from business and psychology to education, engineering, and pharmacy,” says Downing Thomas, associate provost and dean of UI International Programs.

The 2015 Open Doors Report on International Educational Exchange finds the number of international students at U.S. colleges and universities had the highest rate of growth in 35 years, increasing by 10 percent to a record high of 974,926 students in the 2014–15 academic year.

Not only do international students contribute to the cultural vitality of the campus and community, but they also have a major economic impact, Thomas says.

International students contributed $183.1 million to the local economy at the UI and supported 1,735 jobs, according to data from UI International Student and Scholars Services.

According to NAFSA: Association of International Educators, 12,220 international students contributed $350.9 million to the Iowa economy and supported 3,630 jobs.

Study abroad statistics from the Open Doors report, which are a year behind international student statistics, show a 5 percent increase in study abroad during 2013–14 at the national level.

Though study abroad by American students has more than tripled in the last two decades, reaching a new high of 304,467 students, still only about 10 percent of U.S. students study abroad before graduating from college.

UI’s rate of study abroad participation for 2013–14 is 29 percent, much higher than the national average of 10 percent.

The drop is primarily among graduate students, who are particularly hard to track, and the Open Doors report does not count international students who study abroad, where UI has increasing numbers, says Doug Lee, assistant provost of UI International Programs.

No. 1 study abroad program in India

The UI also has the No. 1 study abroad program in India, Thomas says, with no other U.S. college or university sending more students to India than the UI, with participation from all 11 UI colleges. The UI had 89 students who studied abroad in India during the 2013–14 year.

Nationally, U.S. students studying abroad in the United Kingdom, the perennial leading host destination, increased by 6 percent to 38,250; the U.K. hosted 13 percent of all Americans who studied abroad for credit at home institutions in the United States. However, there were also large increases in the number of students going to other host countries in Europe, Latin America, and other regions.

At the UI, the most common study abroad destinations in the same time frame were Italy, Spain, the U.K., India, and China.

The UI is also greatly expanding the number of internships opportunities for students beginning in summer 2016. The UI will be offering eight-week summer internships in Barcelona, Berlin, Dublin, London, Milan, Paris, Rome, Santiago (Chile), Shanghai, and Sydney through a new partnership with the Institute for the International Education of Students, or IES Abroad.

“We are confident that our numbers are increasing this year through our enhanced offerings of year, semester, and winterim or spring break study abroad opportunities for all majors,” Lee says.

The Institute of International Education, in partnership with the U.S. Department of State's Bureau of Educational and Cultural Affairs, publishes the Open Doors report annually.

View the most recent study abroad statistics at Study Abroad at the UI.