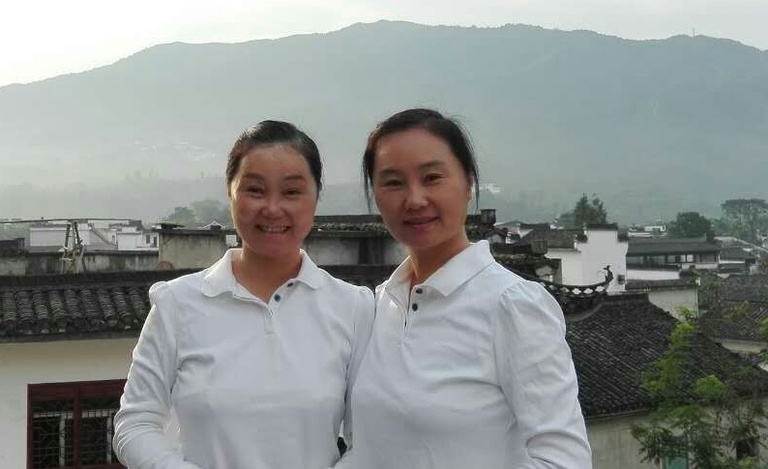 This year, International Student and Scholar Services chose to recognize a “runner up” winner because of the excellent recommendation submitted by Jianlan Ren, an undergrad student from Panjin in the province of Liaoning, China.  Jianlan is pursuing a double major in biochemistry and human physiology, and hopes to graduate in May of 2016.

ISSS prefers to take a very broad view of how “family” and “parents” are defined when selecting recipients for our International Parent of the Year Award.  To quote Jianlan, “The definition of family is different for everyone, but in my family each of us learns to help each other.”  Jianlan nominated her mother, Ying Pan, along with her aunt and mother’s twin sister, Hong Pan, as international parents of the year.

Jianlan’s mother and aunt come from a larger family of three sisters and also grew up in Panjin.  Jianlan says, “They grew up together and will consult with each other about everything.  Even after they got married, they still have the closest relationship with each other.  Although both of them are 46 years old this year, they always wear the same clothes everywhere, and they trust each other more than other sisters.”

In 2000, Jianlan’s mother was injured by a natural gas explosion at her workplace.  Half a year later, Jianlan’s mother and father divorced.  As a result, while her mother was recovering in the hospital, Jianlan’s aunt Hong took care of her.  Jianlan grew up with constant support and encouragement from her mother and aunt.  “They taught me how to be strong, what the meaning of family members is, and how to stand up when you face difficulties.”

At the end of Jianlan’s university entrance exam in 2011, she realized she had a dream to study abroad and told her family of her idea. “My mother said that if I was willing to study hard, in the range of her economic ability, she would do her best to support me; she said if I was determined to do this, then I should try to apply for foreign universities.  After I applied successfully, she did not give me a lot of pocket money; instead, she encouraged me to find a part time job and become independent.”

Unfortunately, difficult times would come again to Jianlan’s family.  In 2014 her mother and an older aunt were both diagnosed with breast cancer at the same time.  Jianlan’s aunt Hong took care of both, but none of them would permit Jianlan to halt her studies in order to return and help.

Jianlan’s mother and aunt Hong both work in an oil company in Panjin.  Her mother is an accountant and her aunt a human resources specialist.  Her aunt loves music and her mother enjoys calligraphy. “They are just ordinary people, with no outstanding contributions or achievements, but I think both of them are the most competent parents, at least for me.”

We congratulate Jianlan’s mother, Ying Pan, and her aunt, Hong Pan, for doing an exemplary job supporting Jianlan’s studies at the University of Iowa.