Brett Burk, of Oskaloosa, IA, has been awarded a Fulbright U.S. Student Award to pursue an English Teaching Assistantship in Taiwan for 2015-16. Burk graduated from the University of Iowa in December 2014 with a B.A. in linguistics and an emphasis in TESL (Teaching English as a Second Language). 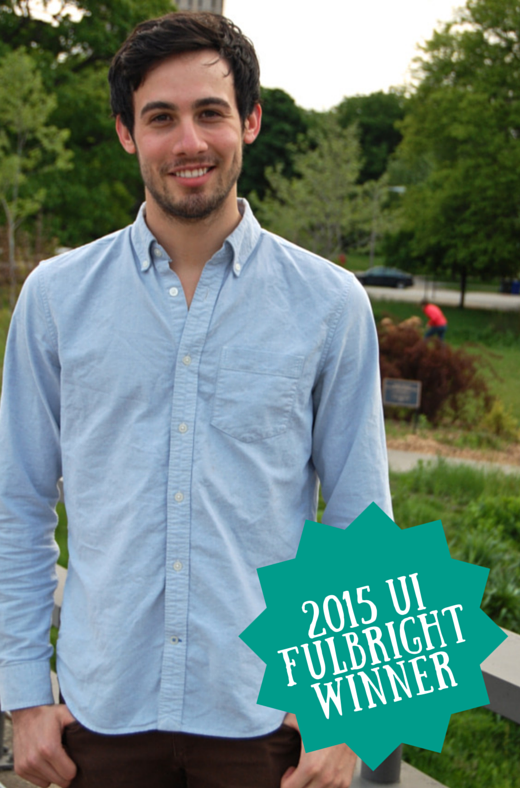 Burk will serve as an English Teaching Assistant (ETA) in Taiwan on a 2015-16 Fulbright U.S. Student Grant

During his assistantship, Burk will draw on this academic background and experience tutoring English language learners in China and the U.S. to build and expand upon the English curriculum of his host school.

“With (nearly) one billion native speakers and growing global, political and economic relevance, it makes sense for Americans to study Mandarin… However, as I immersed myself in the language, I found myself enamored with other aspects of Asian culture, such as art, literature and philosophy,” Burk said.

With the help of a Benjamin A. Gilman scholarship and a UI Stanley Award for International Research, Burk was able to study abroad in China during his freshman year of college on the University of Iowa’s intensive Chinese language program, Iowa in Tianjin.

Burk was inspired by his Chinese language instructors in the city of Tianjin, who encouraged him to continue learning Chinese, and eventually become a teacher, after they conducted intermediate-level lessons in Mandarin.

“Being required to only communicate in Chinese for hours at a time not only boosted classroom confidence but also brought students of diverse backgrounds together through a common language,” Burk said.

Burk’s past teaching experience includes tutoring Chinese youth in English, and mentoring undergraduates in the University of Iowa’s ESL program on academic writing and American English pronunciation. Burk says his ultimate goal as an ESL teacher abroad is to increase student confidence in an immersive English language environment not unlike the one he experiences as a student in Tianjin.

In Taiwan, Burk’s teaching method will emulate an immersion environment by encouraging students to pretend that they are in the U.S. upon entering the classroom. He will implement age-appropriate games, drama and art into the curriculum – activities that will be adapted to incorporate aspects of American culture such as music, history, pop culture and tradition.

While a student at the UI, Burk served as the English editor for a bilingual student magazine called Ai Cheng that works to help bring together domestic and international students at the UI through stories and writing. Brett plans to continue in the spirit of this mission while in Taiwan by working on an ongoing personal project of short stories and visual poetry in Chinese and English. He hopes that bringing a physical piece of creative work back to the United States from will help serve as a way to bridge the cultural gap.

Burk is one of 13 Fulbright U.S. Student Program grant winners from the University of Iowa for 2015-16. See the full list of winners.