I spent the entirety of last weekend in Bath.

The journey commenced around noon on Friday when my friend Juliette and I left the Norwich train station for London Liverpool Street. We originally intended to leave around 10:30 a.m., but complications arose and we missed our train. This incited a brief period of anxiety, but after a few minutes I was able to remind myself that the journey wasn't ruined or cancelled because of one small complication. To travel frequently means you have to be ready for anything to happen, because unfortunately not everything will run smoothly.

When I boarded the train for London, it was all but forgotten. From London Liverpool Street, we had to take the Tube to Paddington station and catch the train to Bath. We got a bit confused, but luckily some of the people around us were kind enough to ask where we were going and give us directions. I'm not sure we would've made the train without their aid!

We arrived at the station around 5 p.m. and ate dinner at McDonald's (I know) before trying to find our hostel, which was not located in the main section of town. We had to cross the river and hike for about thirty minutes. When I say hike, I mean it – the hostel was located near the top of one of the seven hills of Bath. I didn't particularly mind, because the view of the city was breathtaking. The lights and the veins of the city looked like a sea of blinking orange stars. 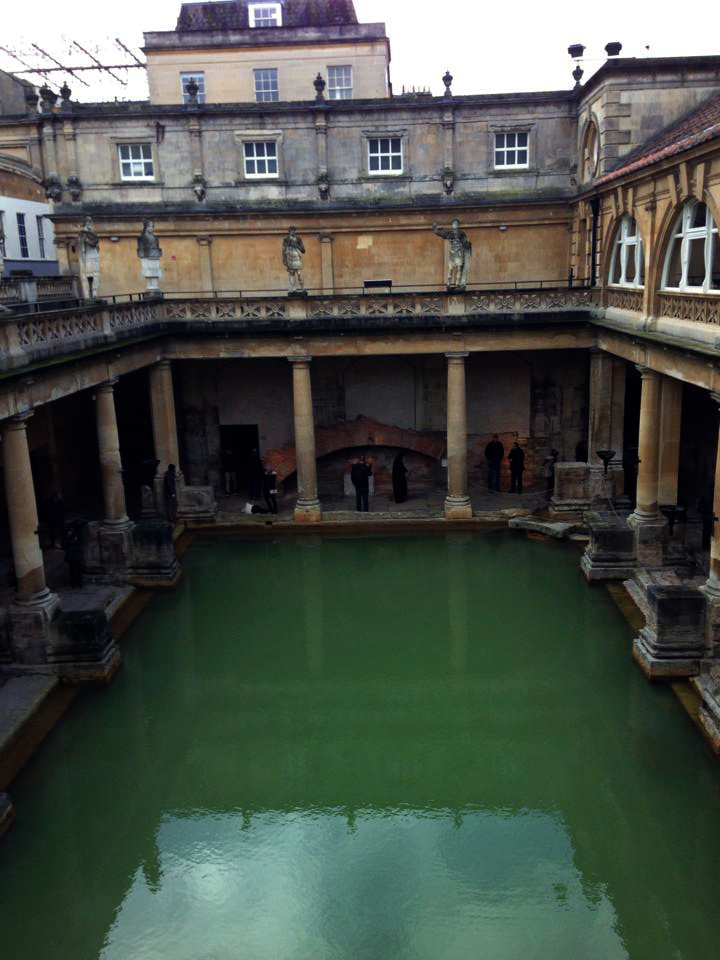 A photo taken inside the Roman Baths, once frequented by the Romans before they lost control of England and the Bath became buried beneath layers of mud.

I wanted to study abroad because I wanted this ultimate adventure, to do amazing things that I could talk about for years, but it was this moment that finally inspired the feeling inside of me. It seems pretty silly now that I've mentioned it. I attempted to capture the moment on my phone, but the photo wouldn't turn out. I guess some things are meant to be experienced, but not captured.

As many college students would say, cheaper is always better, and thankfully Bath has a free walking tour, which is how Juliette and I became acquainted with the city.

Bath is definitely a destination for tourists. Signs were posted in multiple languages and the main square was lined with nice restaurants and shops filled with English-themed paraphernalia (meaning the Union Jack covered everything from pillows, to lunch boxes, to tooth brushes.)

Now, people have resided in the area since the Iron Age, but what Bath is known for is its natural hot springs – particularly how the Romans and future generations of tourists have since utilized the water. After the walking tour, we purchased tickets to the Roman Baths, which were buried under layers of mud for hundreds and hundreds of years before they were rediscovered and open to the public, and with our audio tour we came face to face with pieces of history. It feels almost eerie to walk where people long ago once walked, but this I like this feeling, and it always leads me to a respect for the past and a respect for my own life as well.

At the end of the tour the visitors are allowed to – as they used to say in the eighteenth and nineteenth century – "take the waters," in an effort to improve their health. The water has about forty minerals, and it tastes like something that has about forty minerals in it. I drank only a few sips before I gave up. On the plus side, I've probably added five years on to my life for drinking it.

The rest of the day, and the following morning were spent lazing around town, and visiting sites associated with Jane Austen, such as the Jane Austen Centre – a place dedicated to placing Jane Austen within the context of Bath. I enjoyed it, though I have to say there was no information provided that I pretty much didn't already know, but it was worth the money spent. My favorite part was a little station that had a quill, as well as some ink and paper, to offer people the opportunity of writing in the same manner as people from that time period. I must admit I wasn't half bad at it. There's also a tea room on the second (third floor for you Americans out there) in which they serve all the elements associated with tea parties.

The hostel we stayed in the second night is what one might typically think of a hostel – it held a communal kitchen, several common areas, as well as one bathroom a floor to be shared by everyone. Everything seemed very worn, most especially the equipment in the kitchen and the blue carpet coating the stairs, much different from the hostel the night before. I only got about two and a half hours of sleep before I had to wake and check out of the hotel. I spent the most of the return journey in a sleepy daze. I was certainly very happy to see my bed when I returned!