Reflecting on his research journey: Aditya Chahande in Rajasthan, India

By Brittany Loutsch, this story originally appeared in The University of Iowa Honors Newsletter Winter 2015

Aditya Chahande is currently in his second semester at Iowa studying biomedical engineering with his EFA focus in pre-med. 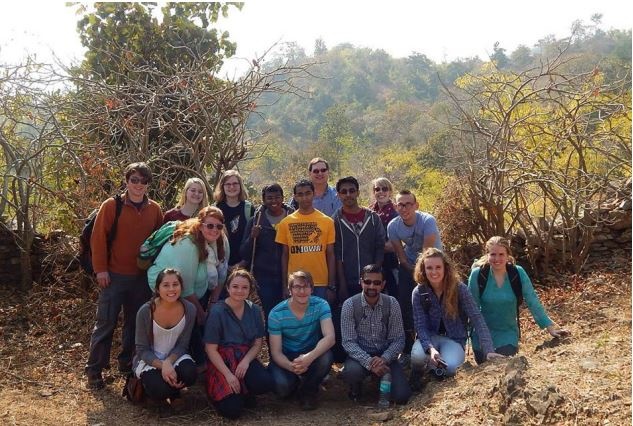 As a first-generation American coming from an Indian heritage, Aditya Chahande travels to central India about every two years. He had yet to see the northern region of the desert state, Rajasthan, however, until this winter break when he traveled with other students from the University of Iowa to fulfill a research project.

Before heading abroad, students conducted research on high-efficiency cook stoves to determine which stoves best suited the remote villages around the city of Udaipur. This trip, offered since 2010, originated out of concern that the semiarid area would result in desertification due to the deforestation practices of the locals. This area of Rajasthan consists of many subsistence farmers who rely heavily on their crops as a source of income and survival. Around 50 to 70 percent of these citizens are living below the poverty line, which Aditya notes is much lower than the impoverished in the United States.

The UI team of faculty and students set out to introduce solar cookers to the local women as a new ecofriendly practice to help stop the unsustainable firewood collection patterns. What they discovered through their research undermined
their original plans. Indeed, the idea of solar cook stoves seemed like the perfect modification, but it actually was of little use since the villagers cook only two meals a day—one early in the morning and the other in the evening. Therefore, they lacked the sunlight needed for the solar cookers to function. With little to no sunlight, the desert region climate became chilly during these times, and many of the women ended up cooking indoors to stay warm. This brought about another problem—smoke and other dangerous gases accumulating within their houses.

The UI team realized they approached the deforestation issue inadequately by asking the wrong questions. Of course, with the language and cultural barrier, communicating was no easy task. In fact, Aditya explained each state in India has its own Marwari or dialect of Hindi. Within these state dialects, every five kilometers brings a more varied version of the language, making the overall translation to English difficult.

After reassessing the issue, the UI team decided they needed to implement smaller, practical changes into the villagers’ daily lives. By looking at how the people used the firewood upon chopping it down, they felt improvements could be made for a healthier environment. After a week of observing local practices of the people, Aditya shared, “I found that even with all of the fantastic things we learn in the classroom, there is something particularly extraordinary that can only be gained from experiential learning. Some of these villagers had vast knowledge that couldn’t be found in any of the reference material we poured through.”

Moving forward and learning from failure, the UI team decided to rid their old cook stoves and conduct testing on three models of high-efficiency cook stoves produced locally. These stoves were designed to consume less wood and still meet the demands of the villagers. After distributing the three types of stoves to people in the village, suburbs and city of Udaipur, the UI research team found the Darfur and Envirofit cook stoves popular among the women. With proper feedback, accommodations can further benefit these individuals. Some suggestions from the villagers included making more durable, long-lasting stoves that are affordable and closer to ground level, as many women prefer to cook on their knees. While the group from UI has left, the local NGO representative will continue to check up on the villagers to see if they are still using their stoves. She will report back to the team who will then further investigate the usage based on the results.

Reflecting on the trip, Aditya believes it would be wise to learn about any limitations within the environment so the most effective and practical cook stoves could be implemented into the daily lives of Indian citizens. “I expected to walk away having solved the problem, but I learned that many of the global issues that people face in developing countries are multifaceted. It is impossible to simply address one face of the problem and assume it would fix everything. Often it is required to make progress on several fronts simultaneously for issues like poverty and sustainability to truly change.”

In the future, possibly during his senior year, Aditya is considering going back to Rajasthan to continue his involvement in the research project. He is interested in further studying in South America, Africa, or Asia to learn about other cultures and to gain insight within his field.