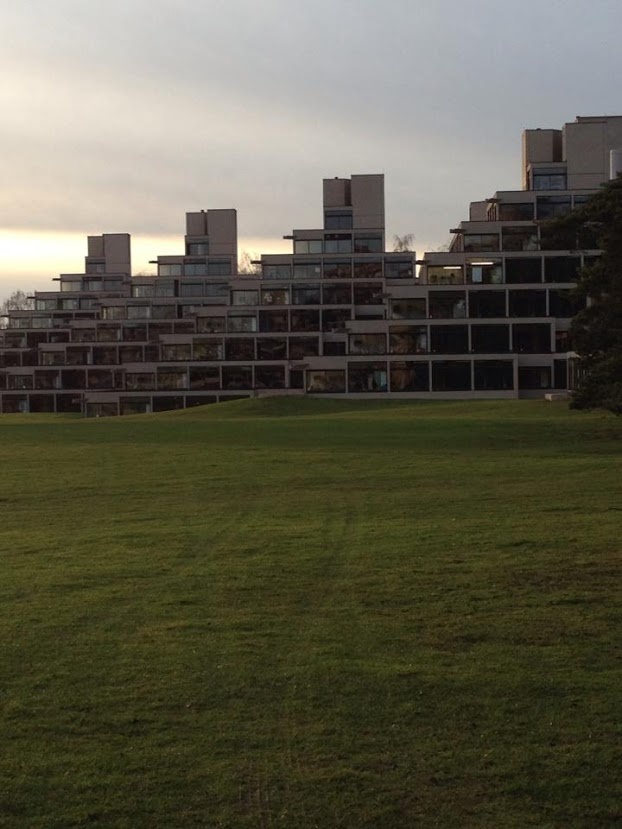 A Ziggurat – an example of architecture that Norwich and the University of East Anglia is most famous for. The layout is meant to offer each student privacy and a stunning view, but quite the social environment as well.

Time since arrival: One week.

I am in England.

I have wasted hours, days and maybe even weeks of my college career browsing through Google Images or other websites imagining what being at the University of East Anglia (UEA as it’s exclusively called here in England) might possibly be and feel like.

I thought that by staring at dozens of pictures and watching Rick Steves’ travel shows that I could predict those things. But, while sitting in the Central Bus station in Heathrow, waiting for my bus ride to Norwich, surrounded by foreign accents and words that I could make no sense of, I realized that I had been wrong. In that moment I finally felt like my journey was about to begin, and I was grateful because what makes a journey and what makes an experience, are all the things that you can’t plan for.

What I didn’t plan for was to be unsettled by was the loo (I originally continued using the word restroom when I first arrived, but I was unfortunately laughed into submission.) England is not that different from the States, so I was expecting certain things to remain the same.

However, I was immediately caught a little off guard when I walked into the bathroom at airport and saw the stalls (or cubicles if you wish to call them that). The stalls were pretty much their own separate room. The bottom of the door reaches the floor and has no cracks where the hinges are located, unlike in America where one can get a pretty good view of someone else’s ankles. There is complete and utter privacy.

I’ve noticed that this idea of privacy applies to other areas as well, like dorm rooms. A majority of the rooms here on campus are single rooms, and if you have a room with two people in it, the two beds are separated from each other by a wall or some other type of divider. It’s much different from Iowa and other American university dorm rooms that I’ve seen in which the living areas of the roommates overlap one another. I enjoy the extension of privacy.

Another thing I was not prepared for was how early the sun sets here. I know it is winter and all, but the sun beginning its dip below the horizon around three-thirty in the afternoon surprised me, and continues to surprise me each day as I’m walking around town or around campus. The dark seems to put a halt on activity in Downtown Norwich. The shops close earlier here and the wandering pedestrians (besides the visitors to the bars of course) seem to all but vanish as well.

My Modules have started, and I’m looking forward to only having one or two classes a day as opposed to the six classes I shoved into Tuesdays and Thursdays last semester. I think I’m finally adjusting to the accent, and beginning to feel more normal using actual words without fear of anyone finding out that I’m American. I like wearing sweatpants (all the Brits that I’ve seen here wear rather skin tight pants or simply dresses or skirts), so they’re bound to discover I’m American with or without the aid of my accent.