I went to Iceland... and then I came back

I don’t know how to answer the questions you’ll ask me about being abroad for four months.

You’ll ask if it was amazing, and then you will ask me if I miss it. And I will say there are a few things that I miss in particular – getting to see mountains every day, and I honestly miss hearing the Icelandic language. The landscape is surreal, so I miss that, too. What I could do without is missing my friends and family in the United States. But now I just miss the friends that I made abroad.

Making friends in an exchange environment is inherently temporary. Starting out I was unsure about how much time and energy I was willing to invest in relationships that, technically, would only last four months. It also left me skeptical about the intentions of the people that I was spending my time with. Were they genuinely interested in my friendship, or was I just the lesser of all of the evils? A bleak mentality going into the program, I know, but making new friends is hard and expectations are probably unrealistically high. 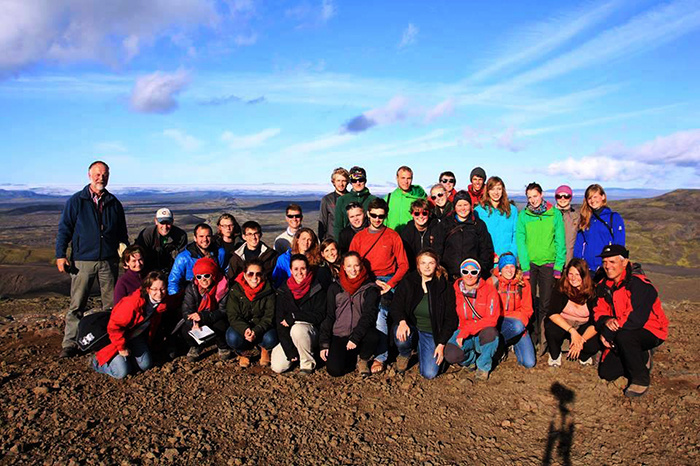 My entire class on the second day of the program – these are the people that I hung out with the most. Photo credit goes to one of my classmates!

Although I left Iceland with many global acquaintances, I found my niche with people who made me happy and by default had something in common with me – we were all there to meet new people. It’s refreshing to abandon inhibitions with people because you don’t have the benefit of time to try to get these relationships right – they have to count the first time. This means ugly crying because you miss your boyfriend and watching them ugly cry because they miss theirs. It means being mutually honest with each other because you don’t have the time to be anyone but yourself.

Most of all, it means taking advantage of the time that you have with them because they are all that you have while you’re abroad. And I’m immensely grateful for those parameters. It’s given me a chance to surround myself with others who share the desire to be exposed to new cultures, landscapes and interactions with humans with diverse histories. I had fun cooking, dancing, learning, working and just spending my time with the friends that I made abroad.

When I expressed doubt about leaving the United States, some of the people closest to me told me that going to Iceland would be good for me because I “needed it.” I’ve agreed with them without defining the facet of my abroad experience I expected to get the most out of. I think I just needed some reassurance about the state of humanity. I’ve learned that an individual or two are not representative of an entire nation. I’ve learned that Seasonal Affective Disorder isn’t an excuse to be rude and unhelpful. I’ve learned that a sense of humor goes a long way (thanks, Reykjavik Grapevine and your dry headlines). And I learned that I have some genuinely caring people in my life.

I naively expected everything to be the same when I came back home. I expected to suffer from this crippling reverse culture shock where I longed to be back in Iceland. Maybe I assumed that my group of friends had found another “Sam” to have lunch with at Bread Garden Market and gripe about work. “Is it weird to be home?” The answer is no. Going abroad is a mini vacation in which you try to learn a new language, squeeze in a few meaningful relationships and then come back and realize that the people and places that you left mean more to you than ever before. “Absence makes the heart grow fonder,” or something.

I’m still not entirely sure what I was expecting. Maybe I thought that I’d land in Iceland and just morph into this adrenaline junkie who would go caving every other weekend, and that my fear of the dark would miraculously vanish. I probably thought that four months in a different country would significantly alter my life and that the urge to return to Iceland would consume me once back in the US. Both the expectations and the reality are true to some extent -- I’ve caught some sort of hiking bug, and I only use a night-light every other night.