Finding my way (kind of) – an underground adventure

I have been in Spain for roughly two weeks and have spent 25% of that time lost. Maybe this is an exaggeration since many of my meanderings, as Tolkien might say, were spent with intention. However, this was definitely not true of my first day. My first experience of feeling misplaced was immediately upon arriving in Madrid. The second (third, fourth and fifth ad infinitim) have been in Bilbao, a clean and beautiful city whose streets seem to snake like tributaries of the Mississippi river even though I’ve been told by everyone who lives here “it’s so small it is impossible to get lost.”

In every Spanish city I have visited so far I’ve found it very easy to lose my way, and the only difference between my first day and today is that now I do it on purpose. 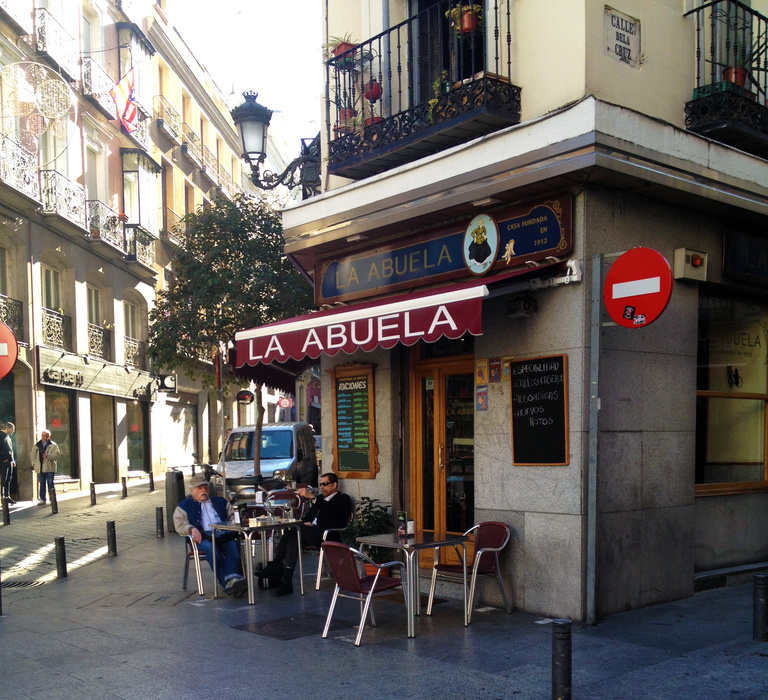 A street view of Madrid and one of its many restaurants.

I came to Spain before many of the other Bilbao students because I opted to take the Madrid tour. As soon as the plane landed in Madrid, my inner compass began its rusty work. Normally when I travel, I switch my phone off airplane mode upon arrival and call whoever is planning on picking me up. But here, this was not an option. I was without maps, GPS, or friends.

So I employed my first technique of navigation – I just followed everyone.

I must’ve walked a half a mile through the beige-tiled, dimly-lit airport. It was 7:30 in the morning and the sun had not yet risen. The chilly building smelled familiar – like the off-brand cleaner my grandma used at her condo in Florida. I skirted those struggling with their luggage up multiple staircases and stuck with the fast paced people at the front of the crowd.

I was among the first to arrive at the belt churning our luggage in slow circles, however, after retrieving my bag I stood there not knowing what to do until the room emptied of people. I eyed a telephone kiosk and the currency exchange attendant but I knew too little Spanish to effectively communicate. So, I walked to a payphone and arbitrarily lifted the receiver. I think my intention was to call the hotel but I didn’t know what I would say even if I could figure out how to work the phone (which I couldn’t).

I knew that a shuttle from the hotel was 20 euros, a taxi would be 30 and the metro was five. I had convinced myself before arriving that I could figure out the metro, it was one reason I’d packed so light. So I left the terminal with the single piece of knowledge I had arrived with – the stop near my hotel was called Sevilla.

It was 27 degrees (F˚) outside so I unpacked my warm weather gear and bundled up. I walked with purpose so at least it seemed like I knew what I was doing even if I did not. I just kept putting distance between myself and that empty baggage claim, where I’d first felt the hollow enormity of being in a place where I didn’t know what I was supposed to do and I didn’t know how to ask. Never before had I felt so alien. 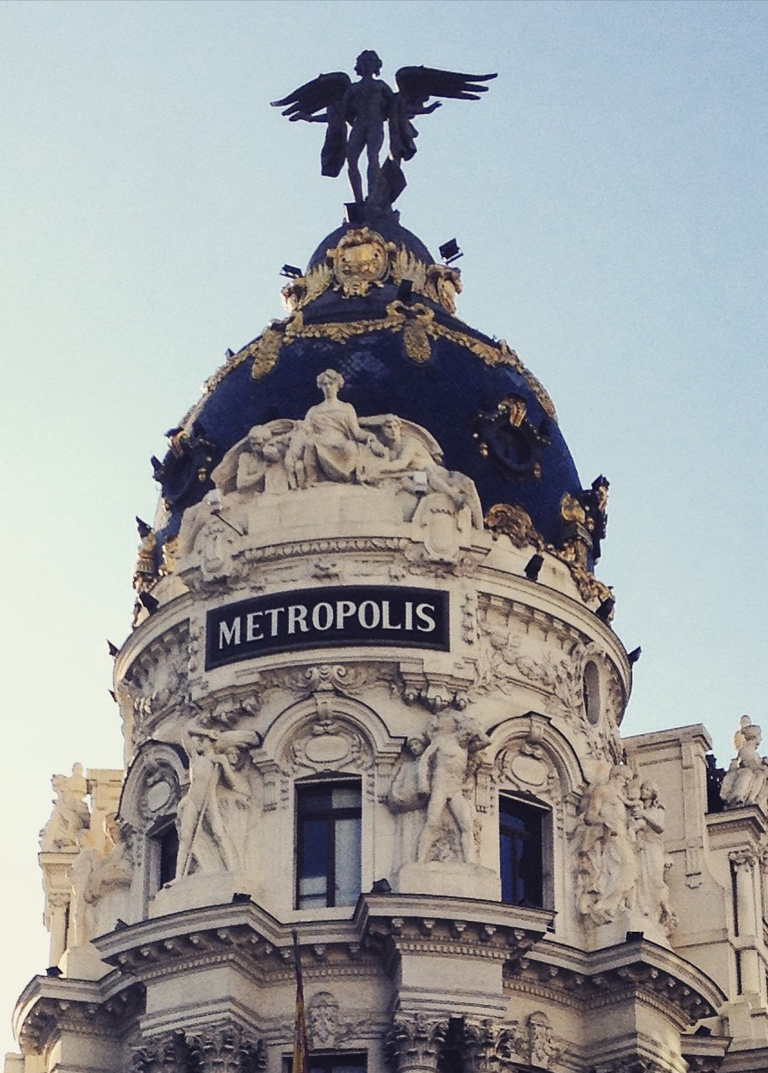 A view of some of Madrid's intricate architecture.

It reminded me of when I used to walk around campus in Iowa and imagine that I was a secret agent from another planet here to gain knowledge while trying to blend in. It always astonished me how impossible it would be, the oak leaves rustling and the squirrels running in spirals seemed terrifying from that perspective, not to mention the various outfits of students and townies. I didn’t realize I could put myself in the actual scenario.

I held onto what I recognized of the world. I’d walked through tiled airports before, I understood how to find an exit, I assumed there were trees and people and coffee somewhere beyond the walls. I continued to walk, following signs for the metro, which I discovered were two big red circles interlinked like abandoned olympic rings. I walked so far that I worried I wouldn’t be able to find my way back to the main terminal if I had to. I hadn’t yet seen the outside world – the airport tunneled on and on like the mines of Moria. By now, a sweaty nausea had overtaken me. It was a mix between a dim fear of actually dying here and the exhaustion of carrying my packs for miles through a stale airport on roughly 20 minutes of sleep.

Just as I was about to give in and find a taxi (which I also was unsure how to do), I saw the entrance to the metro. In my clammy daze I dropped everything on the ground, unbundled, and repacked before proceeding down the escalator into the underground.

I felt like everyone who passed knew my desperate and ignorant condition. It seemed like people were staring at me and were annoyed as they watched me heft my 50-liter pack onto my back, sling my carry-on bag over one shoulde, and scrutinize each sign for clues and instructions. I was too new to realize, as I found out on a later excursion, that many people speak English, and if they do not, if you know the name of your destination, they are more than happy to point the way (once in Bilbao I was led by the arm four blocks by an old woman in a leopard fur coat).

I reassured myself with the words of Mark Twain – “You wouldn’t worry what others think of you if you realized how much they seldom do” – and hobbled to the kiosk where I tried buy my ticket. I couldn’t figure it out so I went to the desk.

I’m not sure if she understood me but she shook her head no and pointed to another window, which I went to. This time, when I said “Sevilla” and held out money, they handed me a piece of paper that I assumed was a ticket.

I couldn’t figure out how to open the gate so I stood there, ticket in hand, smiling awkwardly at the guard (one of whom is at every gate to watch new users embarrass themselves). I watched another man pass through and followed his lead.

Fortunately, the metro maps are incredibly well-designed. I got on the first train that opened its doors to me and observed the straight and simple map above the door while a friendly pre-recorded female voice announced stops. The train was mostly empty and clean. Most people read books. They had no qualms about sitting right next to you even if there were other empty seats.

I enjoyed the opportunity to stare and get stared at, which, I later learned, is not because people sense your ignorance or difference, but because it is just normal to do here. I was happy about that – my staring problem would become my staring cultural norm. I had to change trains twice, but even that was easy if you just looked for the names of places on the signs, or if you did not you had a fifty-fifty chance of getting on the right one. 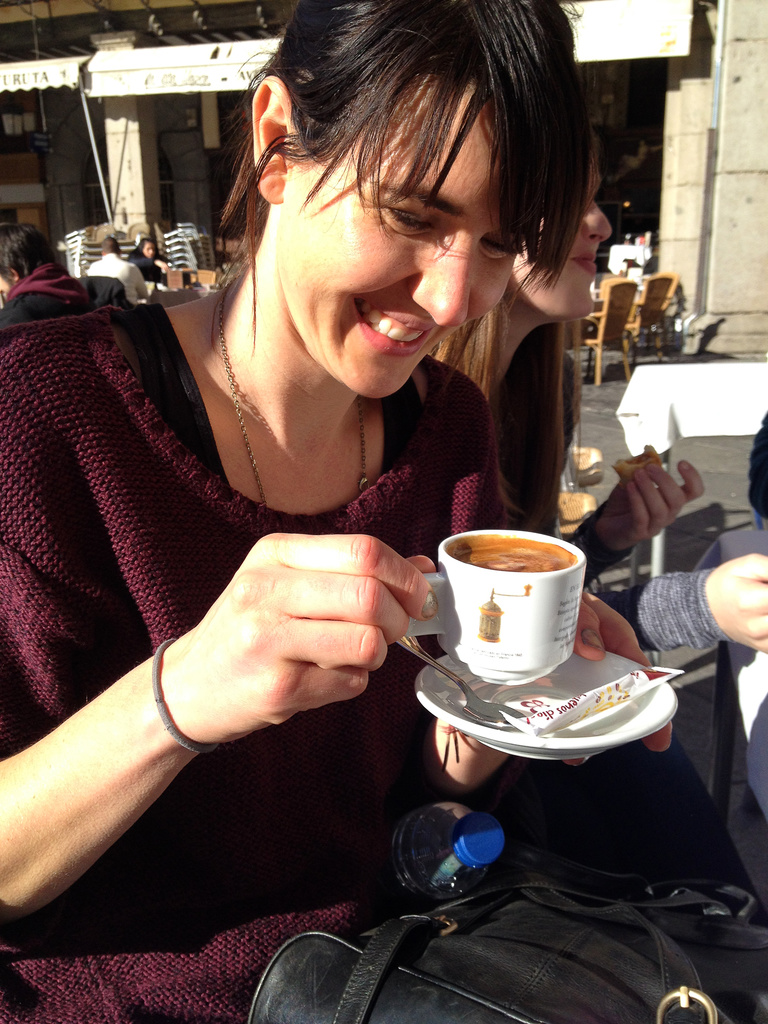 Happy to finally enjoy a cup of coffee.

Admittedly, I did ride one train in the wrong direction for a half an hour and a gray haired woman entreated me to “adonde vas!” and something about the end. I smiled and nodded (the key move to learn before traveling in a foreign country) thinking she was crazy. Even if she was crazy, she was right – it was the literal end of the line. She laughed maniacally as the doors closed behind her. I just stayed seated hoping it would start back the other way away, and it did. I felt like I had outwitted a fairytale riddle.

As we neared the city center, the train filled with more people until there was only standing room. I felt awkward with my giant backpack and smiled stupidly at everyone. Finally, the loudspeaker announced my stop. I was amazed at myself as I exited the metro into the morning light of Madrid and saw my hotel directly in front of me. People hurried past me on the street. Buildings towered higher and with more ancient authority than any I was used to Iowa. The crosswalk lights were strange but I just went with the flow (a success yet again) and got to the entrance of the hotel without incident.

This may seem trivial, but for me it was a major accomplishment. My first attempt to get somewhere outside of the US had been successful. How much more could I achieve here?

Might I order a coffee or even make a friend? The automatic doors slid open without a sound and I approached the desk to inquire after my room. I hadn’t slept at all on the plane and all I could think of was a hot shower and a ten hour nap. Of course it was too early to check in and my room would not be ready for four more hours.

Ah well, I decided to leave my bags with the door man and headed back into the city to get lost once more – this time on purpose.

Heidi McKinley is a senior from Cedar Falls, IA majoring in journalism and psychology at the University of Iowa. She is currently studying abroad on the USAC program in Bilbao, Spain.