A decade of deanship for International Programs: Downing Thomas to return to faculty position after more than 10 years representing the UI on an international stage 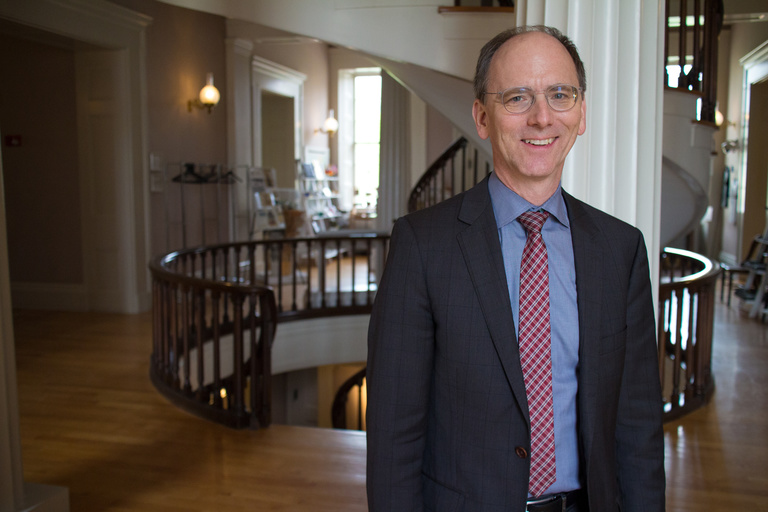 When Downing Thomas ends his tenure as associate provost and dean of International Programs at the end of the semester, he’ll be making two significant shifts in his life.

Professionally, Thomas will return to teaching French literature as a professor in the Department of French and Italian in the College of Arts and Sciences, effective Dec. 31.

“It’s a return to first passions: teaching and research, and I’ll be conducting both ongoing projects and new,” says Thomas, who initially started in International Programs as associate dean and director of the UI Center for Human Rights in 2007.

The second significant shift in his life is personal. Thomas and his wife, Joy, are expecting a baby in December.

“It’s also a good time for me to focus on family rather than have a heavy travel schedule,” Thomas says.

Thomas has served as the university’s senior international officer since 2009, working with students, faculty, and staff in each of the UI’s colleges and traveling to more than 30 countries in an effort to connect and sustain relationships that benefit the UI and its faculty and students. Such efforts have led to recent national recognition and to colleagues crediting Thomas with increased cross-cultural opportunities on campus.

“Dean Thomas has provided vigorous and productive leadership to internationalize the UI campus and highlight the UI’s impressive global footprint both at home and abroad,” says Joan Kjaer, director of International Programs’ communications and relations. “He leaves this position having moved both IP and the UI forward significantly.”