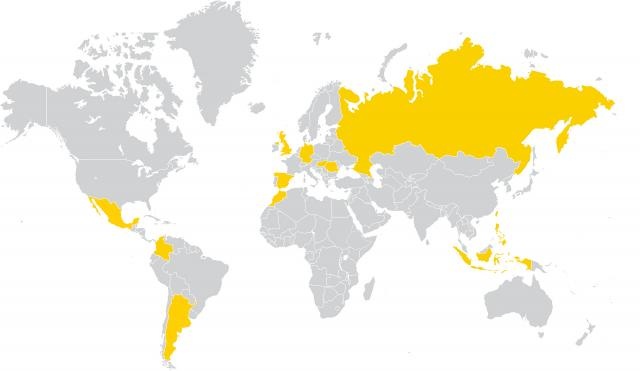 Sixteen University of Iowa Students and alumni have been awarded Fulbright U.S. Student Program grants to conduct research, attend graduate school, undertake creative projects, or serve as English teaching assistants abroad in 2017–18. This number surpasses the UI’s previous record of 15 set last year. The students’ destinations are shaded in gold. Image by the UI Office of Strategic Communication. Image by the Office of Strategic Communication.

The University of Iowa has again been named a top producer of Fulbright students—this time for 2017–18, with 16 recipients—marking the third consecutive year the university achieved the elite ranking.

The UI is tied in the rankings with Stanford University and Columbia University; more than one-third of its 41 applicants received an award.

“Reaching and maintaining top-producer status has not been an accident. It is testimony to the dedication of International Programs staff, of faculty from across the university, and the wonderful efforts of students in many different disciplines,” says Downing Thomas, associate provost and dean of the Office of International Programs, which oversees the university’s Fulbright programs.

“This designation is a reminder that University of Iowa students are among the most promising in our country. Each new group of Fulbright winners deepens Iowa’s tradition of pursuing international connections at the personal level. And by forging such connections, they give a boost to how people overseas view our state and our country,” says William Reisinger, UI political science professor and 2017–18 Fulbright faculty mentor.

The Fulbright competition is administered at the UI through International Programs under the guidance of Fulbright Program Advisor Karen Wachsmuth.

“Our University of Iowa Fulbright applicants demonstrate great focus and tenacity as they put themselves forward into this nationally prestigious competition that attracts more than 10,000 top candidates each year from across the U.S.,” Wachsmuth says. “The Fulbright program is a proving ground for future leaders, scholars, and global citizens, with Nobel Prize winners and heads of state among their alumni. Being selected for a Fulbright opens many doors for future teachers, business leaders, artists, writers, and scientists alike. We are extremely proud of their achievements.”

The list of colleges and universities with Fulbright recipients was published Monday in The Chronicle of Higher Education.

Since its inception in 1946, the Fulbright program has provided more than 370,000 participants—chosen for their academic merit and leadership potential—with the opportunity to exchange ideas and contribute to finding solutions to shared international concerns. More than 1,900 U.S. students, artists, and young professionals in more than 100 fields of study are offered Fulbright Program grants to study, teach English, and conduct research annually. The Fulbright U.S. Student Program operates in more than 140 countries around the world. Lists of Fulbright recipients are available at https://us.fulbrightonline.org/.

The Fulbright program is funded through an annual appropriation made by the U.S. Congress to the Department of State. Participating governments and host institutions, corporations, and foundations in foreign countries and in the United States provide direct and indirect support as well.

For more information about the UI’s Fulbright program, as well as resources for applying and upcoming events, visit the UI’s student funding website.