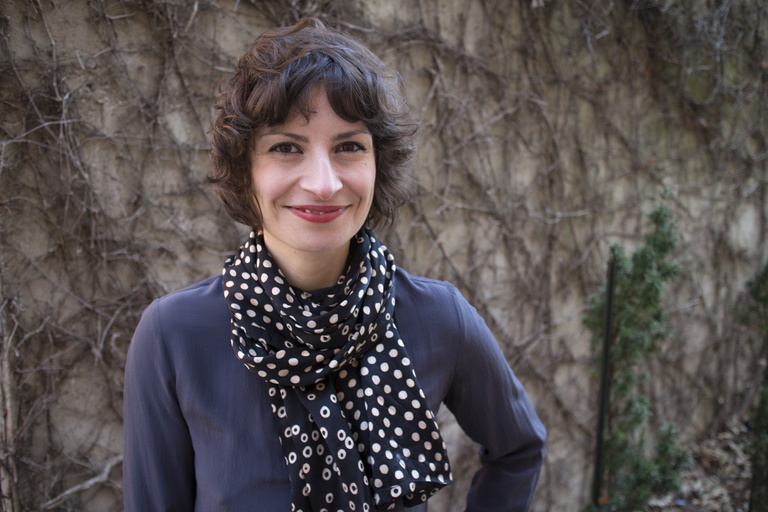 Hodna Nuernberg, recipient of the Fulbright English Teaching Assistant Award, poses for a portrait inside the Daily Iowan TV studio on Tuesday, June 20. Nuernberg drew parallels between her work and the work of Junot Diaz, a Dominican American writer whose multilingual background, Nuernberg draws inspiration from. She will be moving to Morocco to pursue a career in teaching university students the English language. (Ben Smith/The Daily Iowan)

By Grace Pateras, The Daily Iowan

For a University of Iowa graduate, choosing which Fulbright program to apply for, and where, was easy. Now that she is ready for departure in September, she must prepare to teach others while learning the Moroccan culture.

Hodna Nuernberg is used to traveling. Since she was a kid, her mother, father, and sister moved around the United States and France.

Nuernberg followed until she was 15 years old and landed in Iowa City. She graduated from a nearby boarding school, traveled a little bit in between, but always called Iowa City home, even after her family moved away.

Now, she lives only three blocks away from where her family lived when she was a teen. This time, she lives with her husband, Paul Schneeberger, and an adopted cat, Beppo.

They won’t be there much longer, though, because Nuernberg has won a Fulbright English Teaching Assistant Award. Together, the three will pack up and move to Morocco, the North African country west of Algeria and south of Spain.

Starting in September, Nuernberg will teach English at a public university in Morocco to a group of students who want to become teachers themselves.

Nuernberg said she believes Morocco is a good fit for her, culturally. She wanted to go somewhere Arab-speaking so she can add “Written Standard Arabic” and “Darija” to her list of known languages — English and French.

She’s familiar with Darija — the spoken dialects of Arabic used in the Maghreb (the region of North Africa that includes Morocco, Algeria, Tunisia, and sometimes Libya) — because her father is from Algeria and grew up speaking that, though didn’t speak it in the house when she was growing up.