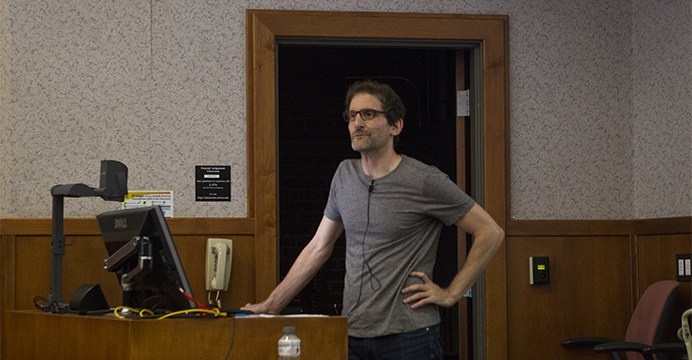 Poet Michael Morse looks at the audience of the Eleventh Hour in Phillips Hall on Wednesday, July 12 2017. Morse presented a workshop as part of the Iowa Summer Writing Festival called "Echo, Letter, Tweet: Writing as Correspondence." He taught at the University of Iowa. Morse received the M.F.A in Poetry from the University of Iowa Writer's Workshop. (Hieu Nguyen/The Daily Iowan)

By Irene Enlow, The Daily Iowan

Iowa City writers have taken their talents overseas this summer to capitalize on the city’s designation as a City of Literature.

The Iowa Summer Writing Festival, which is in its 31st year, expanded beyond Iowa City with the inclusion of two international writing retreats, thanks to a collaboration with Authors at Large, an organization that hosts writing workshops around the world. The retreats are a new addition to this year’s festival workshops.

“Amy Margolis, the director of the Writing Festival, has been wanting to internationalize for several years, so this is good timing,” he said.

The first retreat, in Iceland, took place from May 27 to June 1 with a group of about a dozen, Hemley said.

Hemley will lead a nonfiction workshop at the Thailand retreat, which occurs from Sunday through Saturday. Xi will lead a workshop in mixed genre prose writing, and Canadian author Madeleine Thien will lead a third workshop in fiction.

“We did a writing retreat and workshop [in Iceland], and it went very well,” Hemley said. “The second one is in a place, Hua Hin, in Thailand, and it’s the oldest resort town in Thailand — where the Thai royal family has its summer palace … I’ve taught in the Summer Writing Festival for several years, and this is a natural extension of my experience and expertise.”

The participants of the Thailand retreat come from diverse backgrounds, including Singapore, Hong Kong, Indonesia, the Philippines, and the U.S. According to the organization’s website, Authors at Large hopes that by throwing participants into a new environment and culture, they will gain a fresh perspective on their writing.