In the news: University of Iowa ambassador-in-residence talks about 30 years as a foreign diplomat 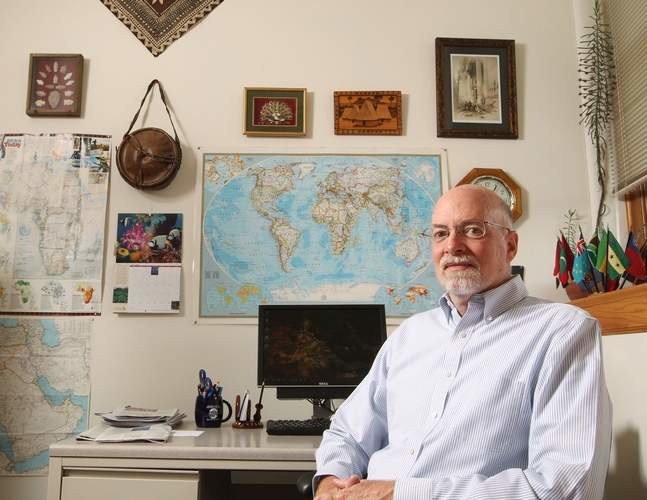 Ambassador in Residence Ron McMullen sits in at his office in Schaeffer Hall on the University of Iowa campus in Iowa City on Thursday, June 8, 2017 surrounded by mementos of his over-30-year career as a diplomat. McMullen was the ambassador to the African nation of Eritrea, along with posts in Myanmar, Fiji, South Africa, Gabon, Sri Lanka, Dominican Republic and Sudan. (Cliff Jette/The Gazette)

By Erin Jordan, The Gazette

IOWA CITY — As someone who spent 30 years trying to build bridges between the United States and developing countries that included Sudan, Myanmar, Afghanistan, Fiji and the Dominican Republic, Ron McMullen thinks President Donald Trump’s plans to ban travel from several Muslim-majority countries and wall off Mexico are shortsighted and dangerous.

“We seem to be forgoing our leadership position for a self-interested set of actions that I think will damage our long-term standing and prosperity,” said McMullen, University of Iowa ambassador-in-residence who served as U.S. ambassador to the African nation of Eritrea from 2007 to 2010.