In the news: Connecting with Kosovo 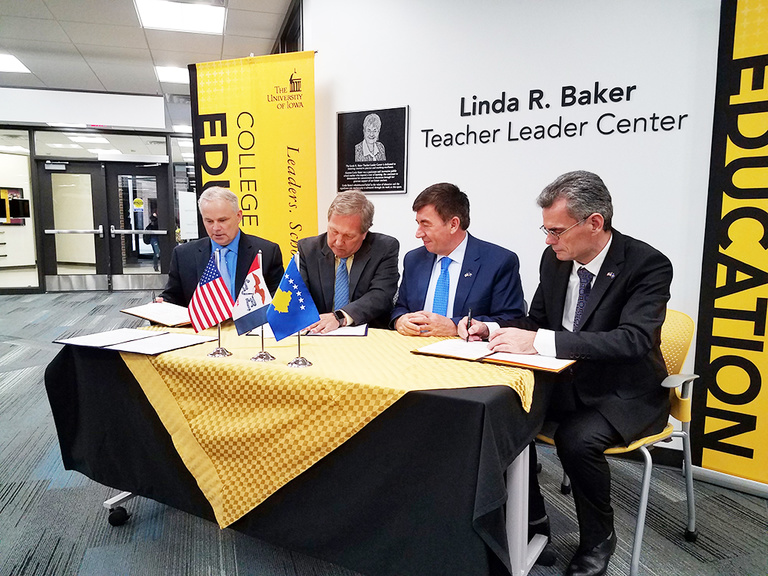 By Andy Goodell, College of Education

The two higher education institutions, separated by 5,262 miles, signed a memorandum of understanding on Wednesday, April 5, opening the door for many collaborative opportunities involving the UI College of Education.

Potential collaborations include education faculty assisting the Kosovo Ministry of Education with both pre- and in-service teacher training on their newly developed curriculum framework. Faculty and student exchanges between the two institutions may also take place. A delegation from the UI is planning to travel to Kosovo to conduct a needs assessment this fall.

Kosovo declared independence from Serbia in 2008 and is in need of developing a stronger curriculum for the students of this relatively new country.

The initial relation between UI and Kosovo grew out of a collaboration between UI College of Law and the Kosovo Ministry of Foreign Affairs. Greg Hamot, a professor of social studies education in the College of Education, is also the associate director of the UI Center for Human Rights, which is housed in the College of Law. In his capacity at the center, he was able to develop a relation with the Kosovo Consul General in Des Moines. From there, the ideas to collaborate on education programs came about.

“Over the past three decades, I’ve worked with many post-communist societies as they reorient their educational systems within a democratic framework,” says Hamot. “Kosovo is doing so right now, and the opportunity to work with them to achieve their goals just seemed like a natural fit for our college.”

On hand for the memorandum signing were Arsim Bajrami, Kosovo’s Minister of Education, Science and Technology and Marjan Dema, president of the University of Pristina. Other guests for the signing included Kosovo Political Advisor Zenun Halili, Consul General of Kosovo General Xhavit Gashi, first secretary of the consulate of the Republic of Kosovo Arberie Shabani, and Executive Director of Iowa Sister States Kim Heidemann.