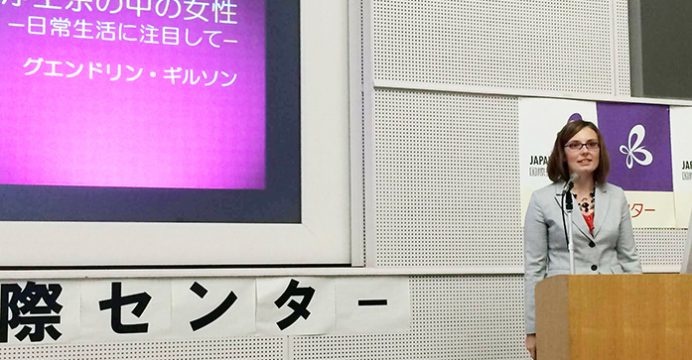 Gwendolyn Gillson, a Ph.D. candidate in religious studies at the UI and winner of a Fulbright Study/Research grant to Japan for 2016-17.

By Emily Kresse, The Daily Iowan

Gwendolyn Gillson’s interest in Buddhism was a self-described accident.

During her time as an undergraduate at Gustavus Adolphus College, she was persuaded to take a Buddhist philosophy course.

“I had a friend who didn’t want to take the class alone, and I ended up falling in love [with Buddhism],” she said.

That course, along with the realization she did not want to study chemistry for four years, led her to pursue a B.A. in religion and then an M.A. in religious studies.

Now, as a fourth-year Ph.D. candidate at the University of Iowa, Gillson will spend the next year doing research in Japan. In addition to a grant she received from the university, she is one of the 14 UI students awarded Fulbrights for the 2016-17 academic year.

The Fulbright U.S. Student Program was created during President Harry Truman’s administration and is named for the senator who introduced the bill, J. William Fulbright. The scholarship program is extremely competitive. Of the 688 applications for the East Asia-Pacific region for the 2014-15 school year, only 149 were awarded.

“I’ve always been interested in how religion plays out in peoples lives,” Gillson said.

Gillson’s research will focus on how Japanese women use Pure Land Buddhism in their day-to-day lives. Her dissertation is titled “Women Creating the Pure Land: Socially Engaged Buddhism in Japan’s Jodo Sect.” She will be a visiting researcher at Bukkyo University.

Part of Gillson’s time spent in Japan will be dedicated to community service. She will spend time working with the women she is studying in soup kitchens, helping out with disaster relief if necessary, and also working as an English language docent doing translations.

Gillson, who has studied Japanese off and on for eight years, said going to Japan was necessary because of the nature of her research, but the Fulbright made the trip possible.

Fulbright applications are demanding and although Gillson said at times she wanted to give up, she relied on the people close to her, both personally and professionally, for support.

“I had wonderful faculty mentors who read over my drafts and who gave me very strong but very useful critiques,” she said.

Her husband said she worked on the application for a year.

“She’s the most dedicated person I’ve ever met,” John Hadfield said. “She’s been working really hard for the past year.”

After having been a TA for four semesters, Gillson designed and taught her own class last spring, “Religion and Social Life: Cults, New Religious Movements, and the End of the World.”

“I had 14 of the most wonderful students, and it was the best experience of my life,” Gillson said, noting that she hopes to eventually be a full-time professor.

UI Professor of religious studies Kristy Nabhan-Warren, who has had Gillson in numerous classes, described her as “an amazing female scholar” who is “really talented but always looking for ways to improve.”

Nabhan-Warren said Gillson would be a good fit as a professor.

“Not all grad students are excellent teachers, but Gwendolyn is a natural teacher,” she said. “I want her to have more confidence in herself and I hope that this is it, like this is the most competitive fellowship in the world, and she got it, so Gwendolyn, you are a rock star.”