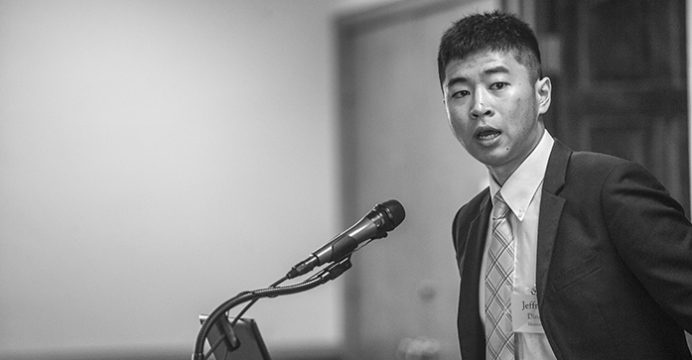 By Kendrew Panyanouvong, The Daily Iowan

As Jeffrey Ding prepares to part ways with the University of Iowa he reflected on the  “amazing opportunities” he’s received while at the UI, which include being awarded four distinguished recognitions.

UI senior Ding will pursue a Master of Philosophy degree in international relations at the University of Oxford in England with support of the Rhodes Scholarship.

The scholarship is touted as “the oldest and best-known award for international study, and arguably the most famous academic award available to American college graduates.”

Ding was one of 32 Americans chosen as a Rhode Scholar representing the United States in 2015. Nearly 90 scholars were selected worldwide from among a competitive pool of applicants.

After presenting at the Iowa City Foreign Relations Council on Tuesday, his research and expertise on Chinese foreign policy, he took time to share some parting thoughts; he will graduate in fewer than two weeks.

“The UI has provided me with so many opportunities from research grants to global internships to leadership experiences in student organizations,” he said. “But what I value most are the people at the UI who supported me, kept me grounded and believed in me.”

UI senior Laura Wang said she and Ding lived next to each other when they were freshmen living in Daum. Ding was a UI Presidential Scholar at the time, the highest reward the university grants to incoming first-year students.

“He’s very accomplished. But I can’t say I’m very surprised. He’s super-hardworking and also very genuine,” she said. “He’s done a lot, but I never got the feeling he does anything for the recognition. I’m really glad it’s really paid off for him.”

Ding will walk away from the UI with numerous degrees, including a B.A. in political science, economics, and Chinese. Ding is also a recipient of the Udall and Truman Scholarships, as well being named a Boren Scholar.

Born in Shanghai, China,  Ding grew up in Iowa City. As he finishes up his last days on campus, Ding said initially the UI wasn’t part of his plan for after high school.

“Oh, man. I remember wanting so badly to get out of here for college, but now that I’m graduating, I wish I could stay longer,” he said.

For most of his senior year, Ding had been studying and interning abroad in Beijing with the support of the Boren Scholarship at Peking University. There, he studied economics and international relations, in addition to working on research on China’s national oil companies and their influence on foreign policy.

“I think he’s quite farsighted. He’ll achieve many things,” said Ling Wang, a visiting Chinese scholar who was in attendance at Ding’s presentation Tuesday.

After graduation, Ding will intern at Perseus Strategies, a law firm specializing in international human rights, followed by another internship opportunity with the U.S. Embassy in Dakar, Senegal, before heading to England in the fall.

Ding shared some final advice for UI students as his time as a Hawkeye nears an end.

“Search out people who are doing cool, interesting things, and engage with them and their interests,” he said. “Be wary of the singular story and seek out friends, teachers, and mentors who help you develop into a many-sided person.”