The following article was written by Kendall Heitzman, assistant professor of Japanese literature and culture in the UI Department of Asian and Slavic Languages and Literatures. 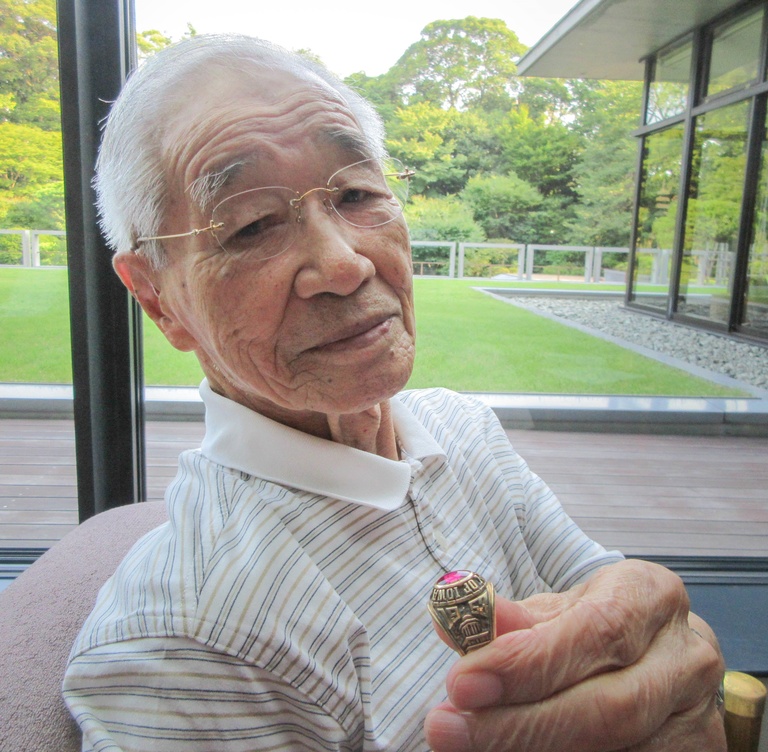 Kasuga-san with his Iowa class ring at International House on August 4, 2015

This past summer, after a week of touring the University of Iowa’s study-abroad partner programs in Japan, our delegation joined Associate Provost for Academic Affairs and Dean of International Programs Downing Thomas for an impromptu alumni gathering at a hotel in central Tokyo. We were not sure who would show up on such short notice, but about twenty alums did. The hotel had failed to provide us with any chairs, and I worried about one man in particular, who leaned lightly on a cane and in his self-introduction had mentioned that he was 92. I needn’t have worried; for over three hours, Hiroyuki “Larry” Kasuga (M.S. industrial engineering, ’53) made his way around the room, introducing himself and eager to catch up with old friends and make new ones, and to hear the latest word from his beloved Iowa.

I met Kasuga-san again later in the summer at the annual gathering of the Iowa-kai, a group of alumni and friends of the UI who have gathered in Japan since Kasuga and others started the group shortly after his return to Japan in the summer of 1953. The alumni, mostly Japanese nationals, ended their meeting by singing the Iowa fight song (which I am sorry to admit I did not know until they taught it to me). In August, Kasuga and I met again, just the two of us, at the International House in Tokyo, in the very room where his wedding reception had been held, a week after his 93rd birthday. There, over a long lunch, as we looked out the windows at the I-House’s immaculate Japanese garden in the height of summer, he told me his story. 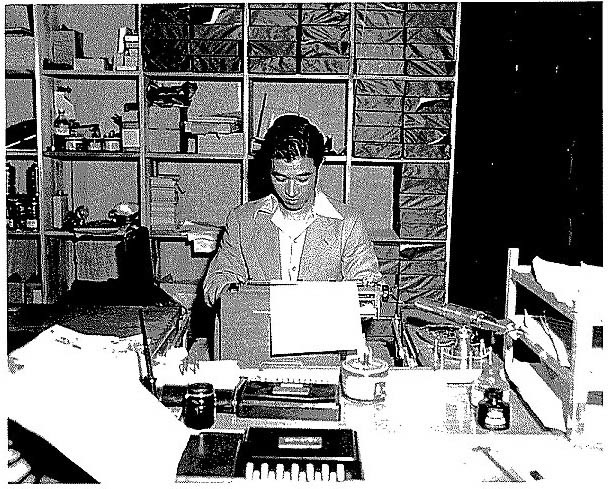 Born in a small village in rural Hokkaido, in the north of Japan, Hiroyuki Kasuga excelled in school. His mother would often tell him that she wished they had the money to send him abroad to study. In 1940, Kasuga headed to Tokyo for college. The following year, both of his parents died, a few months apart; it was a small blessing, he thinks in retrospect, that they did not have to experience everything that happened after Japan went to war with the United States. Kasuga graduated from Keio University with a B.S. in mechanical engineering in September of 1945, only a month and a half after the end of World War II. He found work at the U.S. naval base in Yokosuka, where he was able to practice his English, and in 1951 he came to the UI as one of a dozen students on a Government Aid and Relief In Occupied Areas (GARIOA) scholarship. Of the group, Kasuga alone attempted graduate coursework. Engineering professor J. Wayne Deegan took Kasuga under his wing, but Kasuga struggled with the English-language coursework, barely staying above the minimum requirements to remain in the program. He persevered, however, spending long hours studying for his classes.

At the end of the 1951–52 academic year, when the other GARIOA scholars were heading home to Japan, Professor Deegan found a way for Kasuga to continue work toward his master’s degree. Kasuga was offered free tuition for the 1952–53 academic year, and Professor and Mrs. Deegan allowed him to stay in their home in exchange for babysitting their sons. By staying beyond the end of his one-year GARIOA grant, however, Kasuga was forced to give up his passage home. The UI Treasurer’s Office required that Kasuga deposit $450 as proof of funding for return travel, which an American student, not wealthy himself, loaned Kasuga. On February 7, 1953, Hiroyuki Kasuga received his M.S. degree in the Iowa Field House from then-President Virgil Hancher. “It was the happiest moment of my life,” he said to me, not least because he had fulfilled his deceased mother’s dream for him to receive an American education.

The world has changed in many ways since Kasuga came to the UI as a young man, as has the university itself. When he entered the UI in 1951, there were only 159 international students attending the university; in the fall of 2015, by comparison, there were 4,540, with an array of support systems in place to help them succeed. It would be hard to say that Kasuga has fallen behind the times, however. He likes to play computer games in his free time, and he still drives around central Tokyo, where it is always rush hour. When I asked him to send me some old photos of him, he scanned some and burned them onto a DVD for me. Kasuga returned to Japan in 1953 and began a long career working for IBM Japan—in production control, as a personnel manager, and as a controller. He retired from IBM in 1983 and from the working world in 1987. Throughout, he ran the Iowa-kai with the same financial precision he established at IBM. In the group today, he is its elder statesman. Kasuga is “generous, open-minded, and a real gentleman,” says Kiyohisa Kaneko, the current president of the Iowa-kai, adding that under Kasuga’s leadership the Iowa-kai became a place where academics, business professionals, and even government officials across generations gathered and made connections.

I myself am fortunate to have a fair number of the UI’s current international students in my classes each year. Since meeting Kasuga-san, I have wondered what their memories will be, sixty years from now, of their time in Iowa. Will they see their struggles at the UI as a prelude to great success, as Kasuga did? Will they see their alma mater as something worth protecting, as Kasuga does? (He donates to the UI every year in Professor Deegan’s name.) When they are in their 90s, will they say that graduation from the UI was the happiest moment of their lives, as Kasuga does? It is impossible to predict, but I do know that they are making the university a better place right now, bringing the world in all of its dazzling diversity, hungry enthusiasm, and, yes, occasionally maddening inconsistencies, to Iowa City. When we have doubts about whether internationalization is worth it, we should remember that, in 1951, there was a young man who came to the UI from a country that had been at war with the United States only six years earlier, and, by all accounts, became the UI’s most devoted and stalwart supporter, for six decades and counting. May we all live our lives with such gratitude, and may we strive to foster it in the Kasugas of tomorrow who are in Iowa City with us now.