Sarah Mayer, of Johnston, IA, has received a 2015-16 Fulbright U.S. Student Award to Colombia where she will work as an English Teaching Assistant (ETA). Mayer will graduate this spring with a B.A./B.S. in Spanish and biochemistry from the University of Iowa. 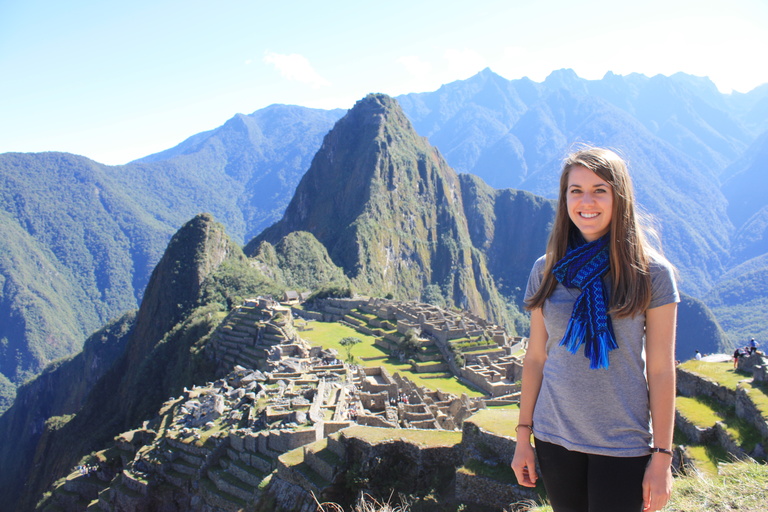 Mayer will serve as an English Teaching Assistant (ETA) in Colombia on a 2015-16 Fulbright U.S. Student Grant.

Mayer, a University of Iowa Presidential Scholar, hopes to cultivate relationships through language learning while in Colombia that will help her better serve the Latino population in the U.S. in her future career as a physician.

Although Mayer has studied Spanish for over eight years, she says her interest in the language was truly solidified during her time abroad in Argentina in 2011 and Cusco, Peru, in the summer of 2013. These experiences opened her eyes to the role language plays in truly connecting with a culture and her volunteer work in the surrounding villages of Cusco fueled her desire to pursue a career that served others.

“A language is much more than a codified sound system; it is a living bond among those who speak it,” Mayer said.

“My favorite memories are staying up all night with my host sister (in Argentina) and her best friend, talking about things like friendship, family, and future goals that transcend cultural barriers, and being silently thrilled that the real product of my years of studying Spanish was not a report card, but rather, relationships.”

Mayer hopes that by continuing to strengthen her language skills she will be able to better connect with some of the underserved Latino populations back in the United States.

Her two majors- Spanish and biochemistry- finally converged when she took Introduction to Hispanic Linguistics, a class that looked at language with a more scientific approach.

“Suddenly my favorite subjects were intertwined,” Mayer explained. “After applying my analytical skills from biochemistry to understand how people interact with foreign and native languages, I have focused much of my Spanish coursework on linguistics.”

Once in Colombia, Mayer hopes to engage her students in real dialogue focused on misconceptions about American and Colombian cultures, drawing inspiration from her own experience with a Spanish professor who encouraged her to read former Fulbright recipient June Carolyn Erlick’s memoir, A Gringa in Bogotá. “Erlick describes a collective consciousness of an ‘invisible war,’ violence that has affected most citizens in some way, but also a growing convivencia, or sense of communal living and togetherness,” Mayer said.

“I realized that the daily lives of Colombians are not well understood by outsiders – nor are those of many Americans. I want to facilitate discussions about perceptions and realities of everyday Colombians and Americans with university students preparing to become English teachers, just like my Spanish professor did with me.”

Additionally, Mayer will use her background in the sciences to start a mentoring program for women in STEM (science, technology, engineering and math) similar to the mentorship role she has played to first-year students in the University of Iowa Women in Science and Engineering program (UI WiSE). She hopes to organize career workshops and facilitate volunteer opportunities for Colombian students interested in medicine at a local hospital.

Upon returning to the U.S., Mayer plans to attend medical school and pursue a pediatric specialty. As a physician, she intends to use Spanish to connect with the growing Hispanic population in the United States.

“Colombians represent the largest and fastest-growing segment of South American immigrants to the United States… An English Teaching Assistantship (will) help me to better serve more of my future patients by deepening my connection to Colombian and Latino cultures and Spanish language.”

Mayer is one of 13 Fulbright U.S. Student Program grant winners from the University of Iowa for 2015-16. See the full list of winners.
The primary source of funding for the Fulbright Program is an annual appropriation made by the U.S. Congress to the U.S. Department of State, Bureau of Educational and Cultural Affairs. For more information on applying for a Fulbright through the University of Iowa, visit our Fulbright page.