Acacia Roberts has been awarded a Fulbright U.S. Student Award for 2015-16. Roberts, of Iowa City, IA, graduated from the University of Iowa in December 2014 with a B.A. in linguistics and French. Roberts also took Arabic language classes at the University of Iowa and studied abroad at the Arabic Language Institute in Fez, Morocco during the summer of 2011. She will be putting her degrees and her Arabic language skills to use as she returns to Morocco to work as an English Teaching Assistant (ETA) this fall. 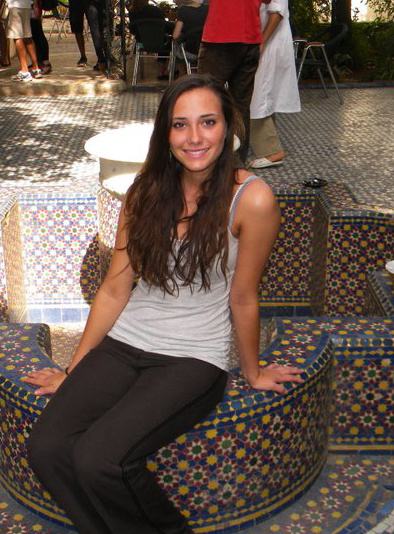 Acacia Roberts will serve as an English Teaching Assistant in Morocco through a U.S. Fulbright Student Grant

As a Fulbright ETA, Roberts plans to create a weekly conversation group for young adults to discuss global events and help them to practice their English speaking skills, as well as providing free English lessons and joining a Taekwondo club.

Roberts holds a black-belt in Taekwondo and gave lessons to children in Iowa City while a student at the UI.

“These activities will allow me to engage with the community in an informal environment and practice my conversational skills,” Roberts said.

Languages have always held a fascination for Roberts. She was exposed to Spanish at an early age while living with a bilingual foster family, and grew to love French, and eventually, Arabic as she expanded her linguistic studies in high school and college.

Her interest in the Moroccan dialect of Arabic stems from its similarities to another language in her life. Roberts is descended from the Wyandot Native American tribe whose native language usage, like Moroccan Arabic, continues to diminish with each generation.

“[These dialects] do not get as much attention as languages such as French or English, a remarkable fact that makes them valuable to linguists, and fascinating to me,” Roberts said.

Upon returning to her study abroad host country, Acacia plans to carry out engaging lesson plans with things like weekly grammar topics and one-on-one progress checks with the university students she will be teaching. In addition to introducing the English language through spoken conversation in the classroom, she will lead a weekly conversation group outside of class in which students will have the opportunity to watch and discuss American films and world events in English.

In doing research for her Fulbright application, Roberts found that only 14 percent of the Moroccan population speaks English, in comparison to about 40 percent in other North African countries. Roberts hopes that her contribution will make an impact in passing valuable speaking skills to others while gaining experience in her own field of study.

“Teaching English in Morocco fulfills my drive to learn about language acquisition and allows me to bring my knowledge of English to other citizens of the world,” Roberts said.

“Growing up, I was perpetually searching, but it seemed to me that I had found a home in Morocco. Going back to teach in an English language classroom, and to serve as a cultural connection to the United States, is how I want to begin my career in linguistics and teaching language.”

Acacia is one of 13 Fulbright U.S. Student Program grant winners from the University of Iowa for 2015-16. See the full list of winners.