The Johnson County Board of Supervisors on Thursday unanimously approved the creation of a community ID program, the first of its kind in the Midwest and one that supporters say will help bring hundreds of local residents out of the shadows.

"I just think that this is an incredible, historic day in Johnson County," Jesse Case, Community ID Group member and president of the Iowa City Federation of Labor, said to the supervisors after the vote. "I've never seen a city with elected officials so willing to come together and work with people for an issue like this." 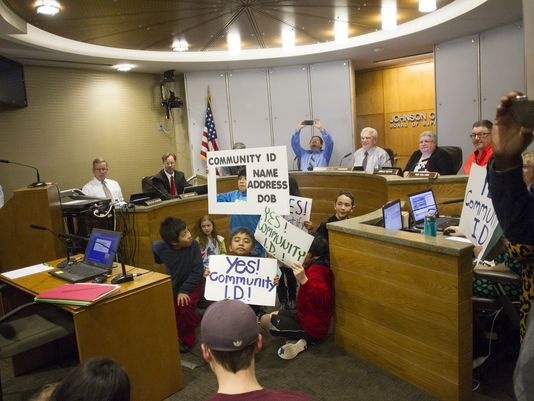 Community ID supporters show off their signs at the beginning of the Johnson County Board of Supervisors meeting Thursday at the Johnson County Administration Building. The board unanimously approved the creation of a community ID program to help residents obtain identification even if they lack certain documentation. (photo and caption by IC Press-Citizen)

Before the vote took place, nearly 100 citizens marched to the Johnson County Administration Building, where the vote took place, to show support of the IDs. Carrying signs and singing chants, the group walked into the supervisors' boardroom and cheered after the resolution for the community ID was approved.

The idea, originally proposed by Iowa City's Human Rights Commission and Ad Hoc Diversity Committee in early 2014, would allow access to local services for immigrants and others who might not have the documentation needed to obtain a state-issued ID.

Program supporters — including a coalition of labor, faith and immigrant advocacy groups — say a county-issued ID card would benefit thousands of residents who have difficulty obtaining the documentation required for a state driver's license or ID card.

In addition to undocumented immigrants, the list of potential beneficiaries includes senior citizens who no longer drive, spouses and dependents of international students, and people who have been suddenly displaced from their homes during disasters or domestic violence situations.

"What made me so happy was seeing 100 people walking towards our building in support of this ID," Supervisor Mike Carberry told the gathered crowd. "We're very, very proud to say we all support this."

The resolution passed by the board approved funding for $17,000 to purchase a machine to print the identification cards. The county could begin issuing cards by July 4.

"That our goal. That's our plan," County Auditor Travis Weipert said this week. "As soon as we can get this machine, we can get the ball rolling."

How the county card would work

Weipert said that the cost of the IDs likely would be $8 to match the cost of state IDs. With more than 700 people already signed up to receive an ID, Supervisor Rod Sullivan said a good portion of the program's cost will be paid for in the program's first few weeks.

"After Johnson County shows the initial monetary support, other entities will step in and help fund the project," Weipert said. Iowa City, Coralville, North Liberty and Shueyville have expressed interest in providing additional funding, he said.

With the additional money, Weipert and County Attorney Janet Lyness said, they hope to add capabilities to the IDs that would allow them to be used as library cards and bus passes.

Training would be needed for county employees and employees of other organizations who would be involved in making the cards and verifying the identity of those wanting to receive those cards, Lyness said.

Lyness said the county still is determining by what means it would verify a person's identity in order to receive the card.

"They will need a listed residence to get the card," she said.

Cards will be mailed to recipients, Lyness said, as another way of verifying the information.

"These cards will not work for homeless, because you need to have an address to get one," she said. "We can't make the card work for every single person."

Supporters of the program say, for the next few months, they will focus their efforts on ensuring that the various municipalities in Johnson County sign on to the program.

"That will be one of the the next phases of the campaign," Rebik said. "But we always are keeping our long-term goals in mind."

Similar programs already are in place in New Haven, Conn.; Mercer County, N.J.; San Francisco, Oakland and Richmond, Calif.; and New York City. And supporters want Johnson County eventually to be seen as a trailblazer in the Midwest — rather than an outlier — when it comes to offering such programs.

"The recognition of the problem and a craving for solution has been around for a while and at work in other Midwest communities," said Jonathan Blazer, the advocacy and policy counsel for the American Civil Liberties Union Foundation in San Francisco. Calif.

Blazer said there have been innovative efforts in some communities around the region, such as broadening the list of identification sources that law enforcement officers are trained to recognize and accept.

"But what Johnson County is doing is superior," Blazer said, "in that it is issuing identification to people who otherwise wouldn't have access to it."

Rebik said her organization already has been working with labor, interfaith and immigration advocacy groups in the Quad Cities to start a similar movement in Scott County. Groups such as Iowa Citizens for Community Improvement, Rebik said, also have expressed interest in beginning a similar movement in the Des Moines area.

The initiative's success in Johnson County, Rebik said, offers a template and a plan of action for implementing similar programs across the state.

"It allows groups in other communities to say to themselves, 'We'll be able to do this,' " she said.

The most challenging part of the process, Rebik said, is educating elected officials and community leaders about the difficulties people who aren't able to obtain a government-issued ID face.

"What is most effective," Rebik said, "is having our leaders and members go to different individuals and groups in the community and tell their own stories."

Officials at the Iowa State Association of Counties say that, as long as such programs have been vetted by the county attorney, they generally are supportive of solutions that work within a county's borders.

"I'm not sure what value such IDs will have beyond Johnson County," said Bill Peterson, executive director of the association. "But if it proves to be a good idea, then perhaps other entities will adopt it."

Johnson County Sheriff Lonny Pulkrabek said he fully supports one of the key intentions behind the program: to ensure that victims of crime, who might otherwise be hesitant to report a crime because they lack an official ID, will be more willing to contact law enforcement.

But Pulkrabek said he is taking a "wait-and-see" approach toward the new program overall.

"The ID is only as good as the vetting process," he said. "So if we all of the sudden stop someone and find they have three or four of these community IDs — all with their picture but multiple names — that's going to be a red flag for us. And I'm going to go to the Community ID Group and say that we're not doing something right with the vetting process."

Pulkrabek's concerns match those of Linn County Sheriff Brian Gardner, who also serves as the president of the Iowa State Sheriffs and Deputies Association Board of Directors.

"I assume that these cards will not be able to be utilized as official ID to board an aircraft or acquire a weapons permit," Gardner said in an email. "As a law enforcement officer, it would be nice to know exactly what purpose these ID cards serve. Perhaps more importantly, I would like the issuer of the cards to advise both the persons issued them and law enforcement officers of the card's true limitations."

Those concerns would apply as well to what Rebik identified as one of her organization's long-term goals: lobbying the Iowa Legislature to allow driver's licenses and other state identification cards to be issued regardless of a person's immigration status.

Rep. Mary Mascher, D-Iowa City, co-sponsored a bill this year that would have allowed the state to issue temporary visitor driver's licenses to certain foreign nationals. But the legislation didn't make it out of the House Transportation Committee.

"We didn't expect it to (get out of committee this year)," Mascher said. "All these things take time and education in order to build a coalition."

Mascher said she expects that, with Johnson County's approval of a community ID program, momentum will build as other counties in the state follow suit.

"Everything moves so slowly (at the Statehouse)," Mascher said. "But at the same time, occasionally there are spurts of growth and movement. People jump on the bandwagon and become part of things unexpectedly."