Iowans respond to the Nepalese earthquake

By Alyssa Guzman, The Daily Iowan 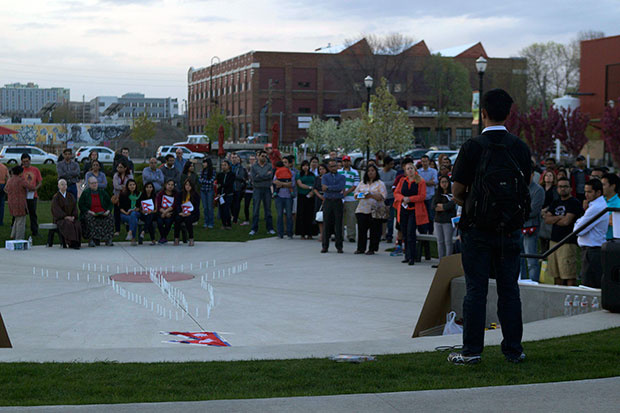 In an effort to raise awareness about the tragedy that has struck Nepal, community members gathered for a candlelight vigil Tuesday in Cedar Rapids.

Binod Sharma, a Nepal native who has lived in Iowa for four years, helped organize the vigil, which around 50 people attended.

An earthquake devastated the country and its people over the weekend, making it to 7.8 on the Richter scale and killing more than 5,000.

Sharma said the purpose of the vigil was to “show solidarity from all the way [in Iowa].”

Though donations were being collected at the event, Sharma said he hopes people leave understanding the tragedy and keeping the Nepalese in their thoughts and prayers.

Amit Ranjan, a Nepal native present at the vigil, said the news was shocking to him.

While growing up in Nepal, Ranjan experienced two earthquakes but none of this magnitude.

Ranjan said the efforts of the people in Iowa mean a lot to him and the people of Nepal.

“It means a lot to us,” Ranjan said. “After that tragic event, every country has stepped up. The United States is providing major aid to Nepal.”

Harshad Lancen, who was present at the vigil, said although he is not from Nepal, he visited the country in September and thought it to be beautiful.

“Nepalese people are some of the nicest people you’ve ever met,” Lancen said. “We have a lot to learn from them. Anywhere in the world where there is trouble, we should help out.”

Liza Shrestha, a University of Iowa graduate student and Nepal native, said Nepalese students will organize small donation stations on the Pedestrian Mall today, and they are discussing what can be done on a bigger scale.

“We are trying to make a student organization [at the UI] right now so that we can raise some funds to send back home or organize something to create awareness,” she said.

When the earthquake struck this past weekend, Shrestha said, she was sleeping.

She said she started getting calls around 2 a.m. on April 25.

“I suddenly woke up, and there were so many messages and emails,” she said. “I checked Facebook because people tend to update things pretty quickly.”

After hearing the news, Shrestha tried to reach her parents.

“It took me around two hours to connect to them, but I got through,” she said. “I was so relieved they were able to get out safely from the house.”

Walid Afifi, a UI professor of communication studies, has started a donation fund through an organization called Direct Relief International where 100 percent of the donations will be going to Nepal.

“Even a dollar goes a long way in these poor communities,” Afifi said. “Any amount helps.”

Allen Clark, a senior fellow for the East West Center in Hawaii and geologist, said Nepal is one of the most disaster-prone countries because of its geographical location and its plate tectonics.

Clark said in Nepal this week, people are going to be focusing on search and recovery.

As far as the rebuilding and dealing with the tragedy goes, Clark is impressed with the efforts by the Nepalese.

“They’re doing a rather admirable job under the most adverse circumstances you can imagine,” Clark said.