Comparing law across the globe

A unique law course has created an opportunity for Iowa students to build relationships with their counterparts on the other side of the world.

The Selected Topics in Comparative Law Seminar — offered by the University of Iowa College of Law this spring — invited Iowa students to compare U.S. and Russian Law in collaboration with students taking a parallel course in Russia.

After being assigned the same legal issues to research, students at Iowa were paired up with students from the Higher School of Economics in Moscow to conduct research together with the goal of completing a joint statement of the chief similarities and differences of the two legal systems with respect to their topic.

The course also came with an added bonus: each student group had the opportunity to travel to their partner’s home country to complete the project face-to-face — which, students say, has significantly benefited the research process. 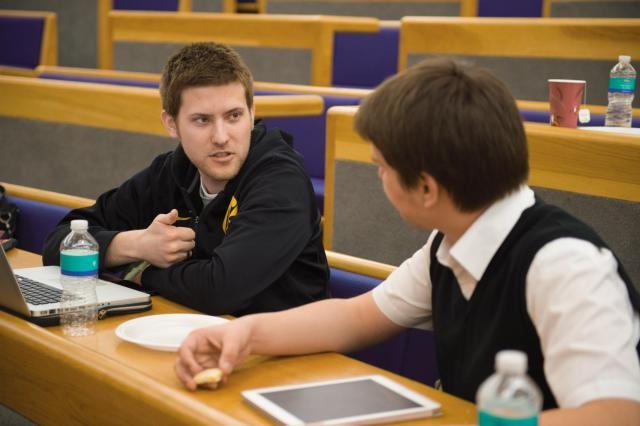 “This has enabled us to do research to see what’s written down and what scholars have said and then actually go to students, practitioners, other professors, and say ‘How does this actually work?’ And sometimes there’s a significant difference between the two.”

Professor Alexander Domrin, who teaches the course in Moscow, says it’s particularly timely due to the fragile political relationship between the U.S. and Russia — a sentiment that was mirrored in discussion between students. The course was made possible by a grant from the U.S. State Department’s Peer-to-Peer Dialogues Program, with the goal of fostering greater contact between American and Russian citizens.

“It was an amazing experience, just understanding how the political tension between our countries is very high right now and the relationship is probably the worst it has been since the cold war,” says Iowa third-year law student Lisa Castillo. “I really appreciated going to Russia, getting to know the people, and being able to facilitate dialogue between our countries so that we can maybe make our relations better and understand each other better.”

When Iowa law students visited their counterparts in Moscow in March, the group had the opportunity not only to review research with their partners, but also to meet and ask questions of attorneys at foreign law firms, see the country, and meet its citizens.

The Russian class has benefited as well.

Anastasia Koval, who is pursuing a law degree in Moscow, says the educational exercise has been a great opportunity for her to practice her English. It’s also helped both student groups to set aside stereotypes or assumptions about one another.

“It has given me an opportunity to look at the law from a different angle,” says Koval, who lived in Sochi before her studies. “This is my first time in the U.S. and it’s quite different from what I am used to. It’s amazing to meet new people and to be in such an international environment here in Iowa City.”

Domrin, who has previously taught courses at Iowa law, said the course has been especially valuable because it has afforded both groups of students an opportunity to critically analyze the relatively young Russian Constitution, which was adopted in 1993.

“This course has been a good opportunity for both student groups to examine the strengths and weaknesses of their country’s laws,” Domrin says. “Good comparative law is about formulating possible suggestions.”

Professor John Reitz — who teaches the Iowa law course — says the experience has proved to be a very realistic exercise in how comparative law works outside the classroom.

“In addition to research and learning about comparative law, this course has the practical aspect that students have to actually communicate with a foreign lawyer and work out an understanding,” Reitz says.

Both professors hope to find a way to extend communication between their students in future courses, and maintain the bonds they’ve already built.

“My greatest hope is that Professor Domrin and I can figure out how to extend this when we don’t have this generous funding,” Reitz says. “ I’m hoping that we can get our classes talking by email and Skype and other digital forms of communication."

“We hope that this is just the beginning of much stronger programs between our two countries,” Domrin adds.