“For me, you are America”
–President Xi Jinping, to a group of Iowans from Muscatine

As you may know, China and Muscatine share a unique bond. In 1985, a lowly Chinese official named Xi Jinping visited the Iowan city to study agriculture. Before becoming China’s President, he returned to Muscatine while Vice President in February 2012 to revisit the people he remembered fondly from his younger days in Iowa. These exceptional visits have inspired the people of Muscatine to continue to build and strengthen the relationship between Iowa and China. On February 19th, I had the opportunity to attend the Mayor of Muscatine's Report to the Community on China Initiatives to assess the progress the city had made on their initiatives since 2012 and brainstorm collaborations for the future. 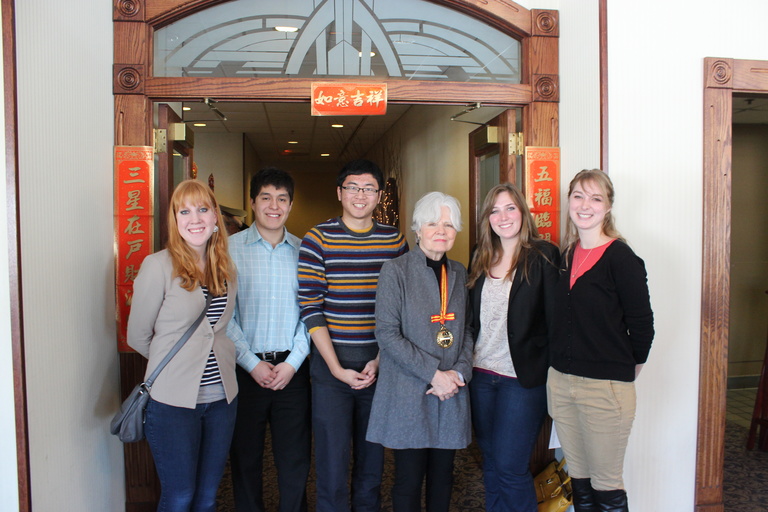 This invitation offered myself and the four other UI 100,000 Strong ambassadors in attendance the perfect opportunity to connect with other Iowans to learn what they are doing to promote Chinese understanding. We are part of a group of six student ambassadors at the University of Iowa charged with the mission of promoting Chinese language study and study abroad in China to other students on our campus.

The luncheon was hosted by DeWayne Hopkins, Mayor of Muscatine, and Sarah Lande, who hosted Xi Jinping during his visits to Muscatine and is one of eight Americans to receive the title of “friendship ambassador” from the Chinese government. The event was fittingly held on Chinese New Year at the Geneva Golf and Country Club. We rang in the Year of the Sheep by eating traditional Chinese dumplings, and were afforded a wonderful view of the quaint town. 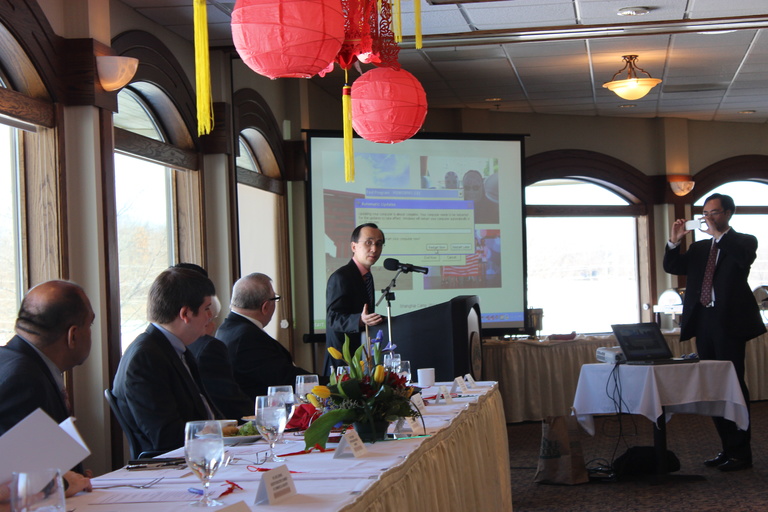 In attendance were community business leaders, Chinese teachers from Muscatine schools, members of the local media, and high school students who had studied in China. Speakers included Liu Jun, Deputy Consul General of the People’s Republic of China in Chicago, Travis Tanner, COO of the 100k Strong Foundation, President of the Muscatine-China Initiative Committee Tony Joseph, and an executive from Wanxiang America Corporation.

Everyone spoke about the importance of the US-China relationship and applauded Iowa for its work to increase the ties between our two countries. Liu Jun emphasized how the most important aspect of a relationship between two countries are people-to-people friendships and encounters. Travis Tanner spoke about just how crucial it is for the next generation of Americans to be “China-savvy” and recognized the University of Iowa delegation for our efforts on campus to promote studying in China.

As part of the effort to increase Chinese education in the US, Wanxiang America Corporation has begun funding a program that sends high school students to study in China over summer breaks. Tony Joseph spoke about goals to turn Muscatine riverfront space into a destination for Chinese tourists, scientific research of the Mississippi River helping to improve Chinese water standards, and the implementation of “ping pong diplomacy” programs in local high schools.

We came away from the event excited and ready to carry out the 100,000 Strong Foundation’s mission on our own campus. The people of Muscatine are a great example of how a seemingly small group can have a big impact on diplomatic relations. Although there were many different ideas being discussed, one message came across crystal clear; in order for any of the initiatives to be successful, Americans must make an effort to understand China. It starts with young Americans becoming interested in China and learning Mandarin. It starts with domestic University of Iowa students reaching out and connecting with Chinese international students on campus. It starts with all of us.