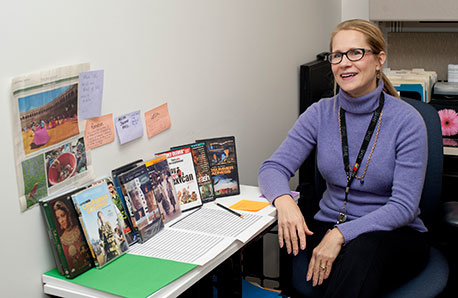 Pam Mollenhauer poses in front of videos from the cultural awareness program she led for the Hygienic Laboratory. Photo by Lab Link

La Lovan made his way to Iowa at a young age from his native Laos after spending three years in a refugee camp in Thailand. It was only recently, however, that the State Hygienic Laboratory employee opened up about his experiences to co-workers.

A store clerk in the Central Services Section at the Ankeny lab, Lovan was among employees who participated in a program to promote cultural understanding among the diverse staff at the lab.

University of Iowa’s Human Resources/Staff Language and Culture Services funded the project, “Collaboration between the Lines: Connecting Cultures to Build Bridges between Work Shifts, Management and Staff at the University of Iowa State Hygienic Laboratory."

The program used a two-pronged approach to connect day and evening shifts and promote cultural understanding at the lab, where more than 10 distinct cultures are represented, said Pam Mollenhauer, program manager in the lab's Office of Public Policy.

Corinne Stanley, UI facilitator for staff, Language and Culture Services, held a preliminary workshop with SHL supervisors in Ankeny. She then conceived the idea of a pronunciation class for staff, like Lovan, who wanted to improve their English language skills, and Culture through Cinema sessions, in which films depicting various cultures represented at the lab were shown during lunch hours.

At the time Stanley and Mollenhauer applied for the seed grant - which the UI offers to support proposals that advance cross-cultural understanding - about 12 percent of the Ankeny lab's 55 staff members were foreign nationals, and Mollenhauer noted, "sometimes we experienced difficulty in communicating.

"It's one thing to say you value cultural diversity in your workplace," Mollenhauer said. "It's another to actually make it a part of their daily life. I knew we could improve by doing something different."

With technical help from Ron Kral and Jeremy Gilmore of the UI Continuing Education Department and John Schlenker, IT support analyst in the Ankeny lab, Stanley was able to use the web-based Zoom video-conferencing system to teach the pronunciation classes. Films about the Philippines, Korea, Cameroon, Mexico and other locations were purchased as part of the $400 grant.

"It was a really great, collaborative effort," said Stanley, who taught two 45-minute classes per week in 3 1/2 months via video conferencing. She also met with participating staff when the films were shown.

Stanley called the success of the pronunciation classes "phenomenal." Pre- and post-test scores on all students indicated significant improvement in their English pronunciation abilities, particularly in the areas of listening skills and confidence in speaking.

The same was true for the Culture through Cinema program. Surveys taken before and after showed participants indicated a greater knowledge of the cultures represented in the films. After the pronunciation classes ended, the three students presented a PowerPoint Lunch and Learn session about their homelands to 23 staff at the lab, including some who made special efforts to attend because of their night-shift hours.

Mollenhauer said attendees were visibly moved by the presentations, which included personal experiences and highlights of their cultures. Another collaboration occurred through a lending program at the University of Iowa International Programs, which provided artifacts, including flags and maps that were displayed to add to knowledge about the cultures, she said. Mollenhauer and Stanley have made presentations to the Iowa Culture and Language Conference and to other groups about the efforts, which are continuing after the seed grant ended.

Laos was the focus of the session in December, with the showing of the award-winning film, "The Rocket."

Mollenhauer said Lovan helped others at the session understand some of the cultural nuances, including the respect given to Laotian elders. Lovan, who has worked at the lab for nearly 10 years, said he enjoyed seeing a movie about his homeland. He also has been sharing more about his culture, noting that he talked about planting rice and building fishing nets during his presentation after the pronunciation classes ended. The classes provided an opportunity to improve his English, he said, while the cinema sessions have also been a learning opportunity.

"I like to learn new things," Lovan said, adding that he is better able to carry on conversations with co-workers.

Both Mollenhauer and Stanley said the classes have had the intended consequences of improving communications and spurring conversations.

"That's what it's all about," Mollenhauer said. "Film, music and food – those bridge the gaps. Those are the ice-breakers."