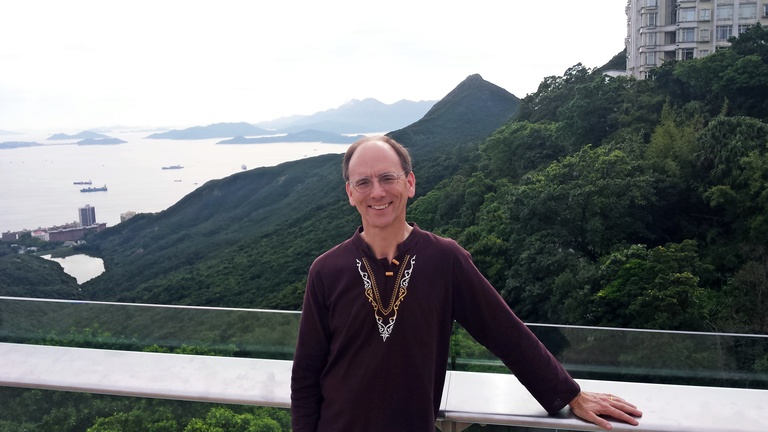 Dr. Downing A. Thomas is well-known on campus as the Associate Provost and Dean of International Programs. Thomas is also a professor in the Department of French and Italian in CLAS. He received his doctorate in French Literature from New York University, and took a position with the University of Iowa soon after.

His service and accomplishments in internationalization are many. Thomas has served on the Iowa Board of Regents’ International Studies Committee, as a representative to the Internationalization Laboratory of the American Council on Education, as president of the Association of Departments of Foreign Language, and served two terms on both the University of Iowa Faculty Senate and Faculty Council. He also served as chairman of the Department of French and Italian from 1999 to 2007.

Thomas was honored as Chevalier, or Knight, by the French government in the Order of Academic Palms in 2005.

The story of what leads one to become interested in languages, academe, and internationalization is as varied as the individuals involved, and Thomas’s path contains many branches. Whereas it can be difficult to find Americans who have studied even one foreign language, Thomas has studied four.

“The more I studied languages the more I knew how much I loved the analytical dimensions of grammar, the logic of how things work in a language, the order. But at the same time, there was this fascinating disorder in the way new words creep into a language, how there are exceptions to everything, how things don’t always fit together neatly. Then, when I studied in France for a year during college, I really experienced the art of negotiating meaning, of taking risks in a new language, putting oneself forward as a person in a new language and culture. I couldn’t get enough of it, so I studied Arabic for about a year, and spent a summer studying the language in Tunisia. While I couldn’t keep that up during graduate school, I picked up some Spanish and spent another summer in a language school in Mexico and lived with a family there. Most recently, in mid-2000, I went back into the classroom to learn German, which was more-or-less successful, since I was able to reach intermediate proficiency. Going back to the classroom in my late 40s reminded me how wonderful the exhilarating and terrifying process of learning a language really is. Everyone should do it!”

His particular focus on French language and literature grew out of family connections and travel to France. “I latched onto French literature as I learned the language and spent time in France. The two are inseparable for me. My aunt and cousin lived in France, and so I had a fascination that came from that branch of my family. But it was mostly through the language and experience of the culture that I came to the literature.”

Thomas states that he particularly came to appreciate how language works in the literary process while in graduate school, and is a topic for which he feels a particular passion. “As a specialist, I settled on eighteenth-century fiction and music because that period, with its grand traditions in the monarchy and its political upheavals, drew me in. The refinement of language and thought, and the beauty of the musical forms from that period, hooked me!”