For those of you who understand the reference in my title, you already know what this blog is going to be about. For those who don’t, it is arguably one of the most famous lines from a very popular show you may have heard of: Dragon Ball Z. That’s right people, today we are going to get nerdy and talk a little bit about something Japan has become extremely famous for worldwide, anime.

Basically, anime (アニメ) is a style of Japanese film and television animation, which is typically aimed at both adults as well as children (depending on the story’s theme and genre) and is short for ‘animation.’ Today, anime usually originates from some form of Japanese manga (まんが)/Japanese comics (Dragon Ball) or from video games (Pokémon).

Anime has become such a huge pop-culture phenomena that even our current president, Barack Obama, (please refrain from political views in the comments) has personally thanked Japan for it during Prime Minister Abe’s visit to America last spring. If you’d like to see this (in my opinion, awesome) event, I’ve provided a link to one of the several YouTube videos showing it:

It’s difficult to give a full picture that describes the anime culture. The reason being is that it is extremely vast with dozens of genres and subgenres, not to mention that anime fandom has spread throughout the world (possible solution to world peace anyone?). Therefore, I will try and stick to my observations of anime during my times in Japan.

The first on my list: the district of Tokyo that has become the center for everything anime and manga related, Akihabara. To many people back home, Akihabara is tantamount to being the ‘holy land’ for fans of anything anime, manga, or video game related. Here you can find anything from your favorite anime or manga to arcades with video games where you climb into a pod and feel like you are in the cockpit of a giant robot (Gundam fans rejoice). I should mention also, that if you are into collecting figurines of your favorite anime characters, if you can’t find them here, they don’t exist. Although, they are pretty expensive so save your allowances my friends!

Ex. One figurine of Kirito from the anime Sword Art Online cost around 21,800 yen, which converts to about $180. Yikes! 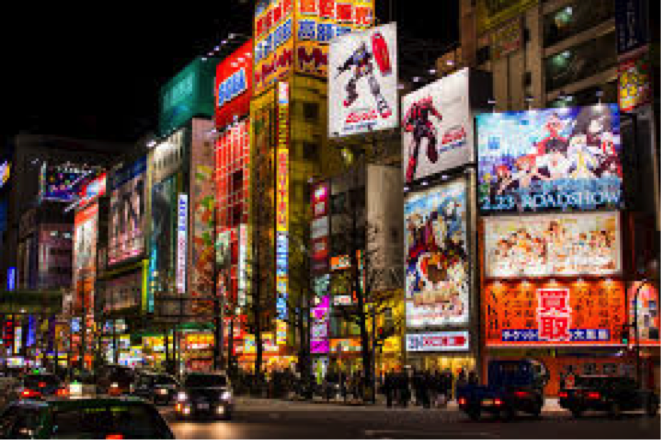 Next, let’s talk about buying anime and manga in general. In the U.S., it’d be fair to say most anime is bought online. There simply aren’t a whole lot of stores that sell a wide variety of anime/anime related products, let alone ones that specialize in it. However, here in Japan, you will usually find no such problem in most cities. In most malls, there is usually at least a small shop where you can find a few good bargains on anime, and most book shops have a wide variety of new or gently used manga.

In America, many people still see anime as something children wake up to watch on Saturday mornings. However, I cannot count the number of times I have seen people on trains, buses, and streetcars here in Japan that read manga to pass the time. 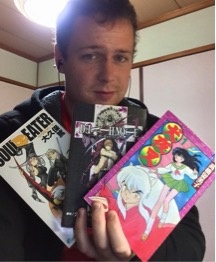 Went ahead and picked up a few copies of manga that some of my favorite anime came from. Looks like I have some translation work ahead of me though! :P

As I mentioned before, anime is marketed at all ages. I can almost guarantee that there is an anime for almost everyone, depending on your preferred genre. In most book stores here you will usually find a wide selection of new or used manga with genres including, but not limited to: action, comedy, romance, tragedy, murder-mystery, psychological drama, sci-fi, supernatural, horror, and even sports...People, it’s basically just like all your favorite live action shows we see in the U.S., only animated.

The point of stating that anime has become a huge part of Japan’s modern culture is probably mute being this far into this post, but can’t help but say it. When I hear the ominous music from Death Note playing on a show where a man is trying out strange restaurant foods and hearing the epic battle theme music from Inuyasha when a man on TV is reeling in a big fish…that is the point where I literally cannot help but laugh from both amusement and happiness. Long story short, seeing aspects of anime being injected into daily things like the news and local advertisements, it makes the nerd in me giddy.

Well, as I said, I could go on and on about anime. However, if any of this has peaked your interest, I might suggest you think about checking out a local anime club on campus and maybe meet a few interesting people in the process.

Thanks for reading everyone! My semester here in Nagasaki is just about wrapping up, but I plan to get a few more blogs in! まったね！

*Luke Bader is a senior majoring in international studies with a minor in Japanese and a certificate in writing at the University of Iowa. This semester, the Jesup, IA native is studying abroad on the USAC Nagasaki Program in Japan.