Steph Rue, of Cleveland, OH, has been awarded a Fulbright grant to conduct research in Seoul, South Korea for 2015-16. Rue, who will graduate this May with an M.F.A. in Book Arts/Center for the Book from the University of Iowa, will focus her research on early monastic paper and book production methods, as well as the historical techniques and the spiritual underpinnings of Korean bookmaking. 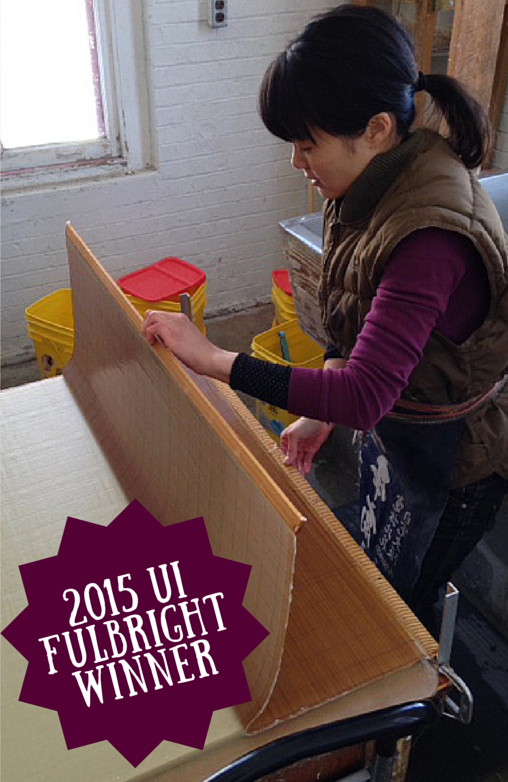 Steph Rue will travel to South Korea on a 2015-16 Fulbright grant to study traditional methods of Korean book and paper production.

“Despite Korea’s rich 1,500-year history of paper and book arts, many of its practices and traditions are in danger of extinction,” Rue explained.

“As a book artist with a Korean-American heritage, I recognize an opportunity to preserve the spiritual and historical tradition of Korean book arts, both in South Korea and the United States.”

As part of her project, Rue will create a series of artist books and paper artwork in Seoul that will incorporate her research on traditional bookmaking methods.

Rue spent last summer in South Korea investigating the connection between traditional Korean handmade paper (hanji) and Buddhist spirituality on a Stanley Graduate Award for International Research from the University of Iowa. As a result, she became interested in the way traditional Korean Buddhist books were produced, the artisan-monks who made them, and their binding, papermaking and printing methods.

In addition to exhibiting her artwork in Korea, Rue plans to offer bookbinding workshops that she will organize and teach in art centers such as the Print Art Research Center in Seoul.

“My exhibition and workshops will generate interest in Western-style and Korean book arts, both traditional and contemporary. While in Seoul, I plan to be involved in the local printmaking and book arts community,” Rue said.

Upon the completion of her Fulbright fellowship, Rue plans to exhibit her artwork internationally and continue to make artwork informed by Korean techniques and materials. She also plans to open an art center in the United States that will connect the American public to traditional Korean book and paper arts. She believes the center will provide a venue for continued education and exposure to Korean culture and book arts via workshops, lectures and exhibitions.

“I can’t help but feel that Korea’s rapid economic development has come at the cost of neglecting some of its deepest and most valuable artistic traditions,” Rue said.

“I hope to be an ambassador of this slow, traditional art form, whose value has been overlooked both in Korea and the West. I am eager to bring to light the necessity of maintaining traditional book and paper arts as a means of preserving the rich history and soul of Korean culture.”

In addition to her Fulbright grant, Rue also received a prestigious Critical Language Scholarship (CLS) from the U.S. Department of State to spend eight weeks in intensive Korean language study in Gwangju, South Korea during summer 2015.

Rue is one of 13 Fulbright U.S. Student Program grant winners from the University of Iowa for 2015-16. See the full list of winners.