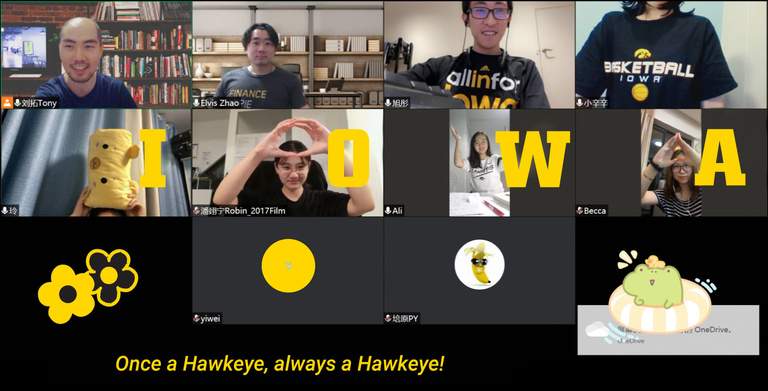 Earlier this summer, a dozen UI alumni from the Greater Bay Area of China, which includes Hong Kong, Macau, and nine mega cities in Guangdong Province, attended a virtual get-together organized by Tuo (Tony) Liu (BFA ’13). During the event, the group heard news about their alma mater, talked about their current jobs, and shared their cherished UI memories. “Most of us had worked at Burge Market Place or Hillcrest Market Place,” says Liu, “so we spent time talking about our work experience there. It was so much fun!” “We also mentioned our favorite restaurants and dishes in downtown Iowa City. The greatest surprise of the event was the moment when two alumni realized that they currently live in the same apartment building.”

Growing up in Guangzhou, one of the largest cities in the Greater Bay Area of China, Liu was attracted to the UI by Iowa City’s college town atmosphere. “When choosing a college, Iowa City reminded me of my childhood life with my grandma in a rural village in Southern China. Also, I believed I would benefit from some of the great majors and courses offered by the UI," Liu recalls.

As an undergraduate student majoring in 3D design, Liu enjoyed his time writing essays in the Main Library, working on art and design projects in Studio Arts, and walking around campus. After graduating from the UI in 2013, Liu went to Washington University in St. Louis to pursue a master’s degree in architecture and eventually landed an architectural design job at HGA Architects and Engineers in Boston. Last year, Liu returned to China and started his own design studio in Shenzhen, a major city in the Greater Bay Area.

When reflecting on his vision of alumni engagement, Liu says, “Besides launching my own business, one of the things I prioritize after moving back to China is to connect with fellow Hawkeyes. The Greater Bay Area has huge potential to be an economic center in the world. Many UI alumni live and work in this area, and it’s important for us to connect with and support each other.  In addition to online gatherings, I would love to organize in-person events to help alumni get together, such as dining out, hiking, company/university tours. I believe alumni networking is essential for career development.”