Pedro Marra: From Brazil to Iowa with a clear vision for his future 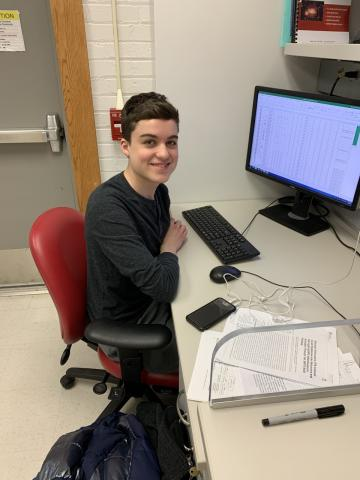 Pedro Marra at the Shinozaki Lab


Growing up in Sao Paulo, Brazil, Pedro Marra was an active youth who participated in many activities, including swimming, soccer, and tennis. With his parents, younger brother, and many extended relatives around him, he had a strong support network.

While Portuguese is his native language, Pedro’s parents believed learning English was essential. They enrolled Pedro in tutoring sessions at the age of four, and by fourth grade, English was a part of his school curriculum.

Having a solid foundation in English proved to be very beneficial to Pedro, when, at the age of 14, his family moved from Sao Paulo to Iowa City for his father’s career in medical research. During his high school years in the U.S., Pedro wasn’t as active in school sports as he was in Brazil. “Looking back, I believe I should have gotten more involved. It’s a great way to meet people and build language skills,” said Pedro. For his pastime in high school, Pedro enjoyed reading Japanese manga and watching anime.

Now six years later, Pedro has just completed his freshman year at the University of Iowa as a biomedical science student with plans to become a physician one day. Dedicated to academic success and with a clear vision for his future, Pedro found many opportunities at Iowa to help him on his path.

He took part in the Medicus pre-med club on campus, where he was able to learn more about the field and engage with other students and faculty involved in medical programs. Pedro also chose to volunteer at the University of Iowa Hospitals and Clinics ambulatory surgery center, where he worked closely with the nursing staff and assisted with a variety of tasks like patient transport.

Just a few months into his freshman year of study at the UI, Pedro was accepted as an undergraduate student assistant in the Gen Shinozaki Laboratory in the psychiatry department. “We’re currently working on research to develop early detection of delirium. My role is to organize and enter data into our database and run it through an algorithm for analysis. I really enjoy working in the lab; it’s been a great experience,” shares Pedro.

This spring Pedro was awarded an Iowa Center for Research by Undergraduates (ICRU) fellowship, enabling him to continue his work with the lab over the summer session. “When the campus and lab closed due to the COVID-19 pandemic, I was lucky that much of my work could be done from home. Now that the university is starting to open again, I’ll be able to go back into the lab this week.”

Pedro got involved in other activities on campus as well. He served as an International Student Ambassador for Admissions, where he would interact with prospective and admitted international students answering questions and sharing details about the UI. He also enjoyed participating in the UI Table Tennis club and attending Bate-Papo (Portuguese conversation hour) meetings, where he was able to connect with other Portuguese-speaking students and language learners.

While many students find their academic journey doesn’t follow a linear path, this may be the case for Pedro. “My father was a physician in Brazil, so I was exposed to the medical field early on. I’ve always liked biology and other science classes and determined at a young age that I would like to work in medicine, to be a physician,” shares Pedro. “I guess it’s possible I could come across another field and change my mind, but so far that hasn’t happened.”