In the news: UI Conversation Center: From classroom idea to changing lives on campus, in community 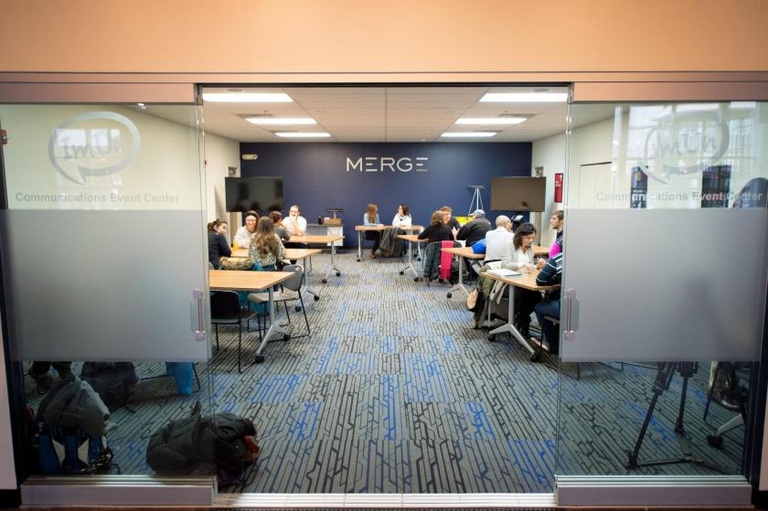 To help international students feel more involved on campus, a group of students developed the Conversation Center and a class that goes with it. Photo by Justin Torner.

What can happen when a University of Iowa student identifies an opportunity for change on campus? If that student is passionate about the idea and recruits the help of peers and faculty who share that vision, a whole lot.

In the fall of 2014, first-year Hawkeyes in a President’s Leadership Class were asked to think about gaps they saw on campus. Mingfeng Huang, who is now a senior majoring in finance and mathematics, saw a division among students who identified as international and those who identified as domestic. He wanted to find ways to remove barriers that prevented international students from feeling confident in fully participating in campus and community life. Several of Huang’s classmates agreed, as did the Department of Rhetoric.

Huang, who is from China, spent three years in the United States in high school before starting at the UI. He says he noticed international students on campus struggled to make friends with native English speakers.

“They didn’t have the advantage I had living with an American family,” Huang says. “Even if I just talked with them 30 minutes each day at the dinner table, that consistency helped tremendously.”

Two years after that President’s Leadership Class, the Conversation Center began hosting one-on-one and small-group conversations between international students and confident English speakers. Faculty also developed a class to train confident English speakers to facilitate such interactions. The class is now part of the minor in rhetoric and persuasion, a testament to the flow of ideas from the president to a student to a faculty member to a departmental curriculum and the greater community.

Since its start in spring 2016, 81 confident English speakers have had 3,075 conversations over 1,861 hours with 462 students who want to improve their English; make friends; and learn more about the culture on campus, in Iowa City, and in the wider United States. In fall 2017, the Conversation Center partnered with the Friendship Community Project, a local nonprofit group, to expand the conversations to include local residents.