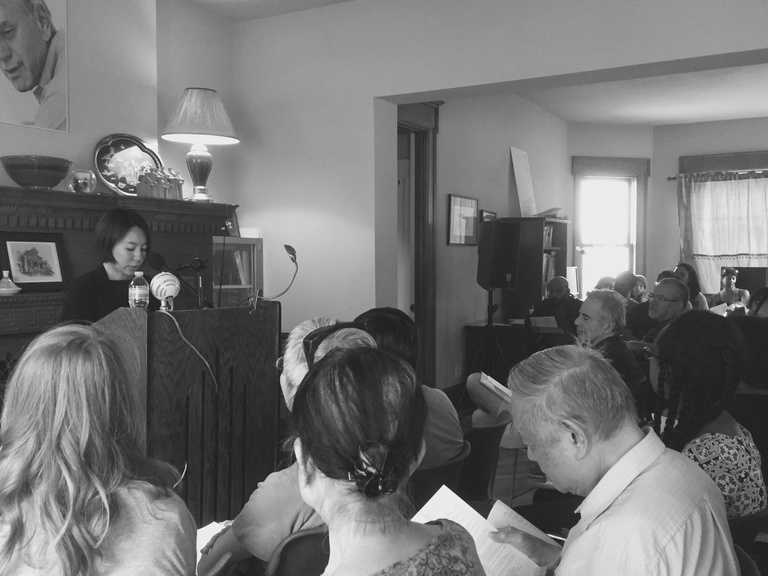 I first met Shibasaki Tomoka, the Akutagawa Prize-winning writer and our Japanese participant in the 2016 International Writing Program, in Tokyo a few months before she arrived. When we were deciding where in the metropolis to meet, I casually mentioned that I am a fan of retro Japanese coffee shops, and Tomoka replied that she is, too. Coffee culture has a long and proud history in Japan, and if you know where to look, you seldom have to go far to find coffee shops that play jazz or classical music, or that prepare rare, ancient beans using cloth filters or bubbling mad-scientist siphons or other systems not yet dreamed of (or perhaps long since forgotten) in Seattle or anywhere else in these United States. Like many scholars of Japanese culture, I pride myself on being a flâneur of Tokyo and urban Japan in general, with a detailed mental map of the landscape of its major cities, and in Tomoka, I found a kindred spirit. I thought I would propose a place, but Tomoka replied to my message with the name of an old coffee shop in Ueno that she likes. On the second floor of a building not far from the station, right there adjacent to the old black market on a street I have walked down maybe fifty times, is an elegant old coffee shop aglow with brass and steam. How could I have missed it?

As we talked over the course of her time in Iowa, and as I read more and more of Tomoka’s fiction, I realized how outclassed I was when it comes to mental mapping. A geographer by undergraduate major and natural inclination, Tomoka writes stories about fictional characters who inhabit a very real world. She lives life with a cell-phone map in her hand, forever reconciling the account of the world on the screen with what she sees in front of her. When she writes about a Japanese streetscape, you can be sure it exists in our world down to the signs and electrical wiring. When her protagonist takes a wrong turn on reclaimed land in Osaka Bay and ends up in a seemingly postapocalyptic landscape—a perfectly paved blacktop road leading across a never-developed field of weeds—you can follow along on Google Maps. 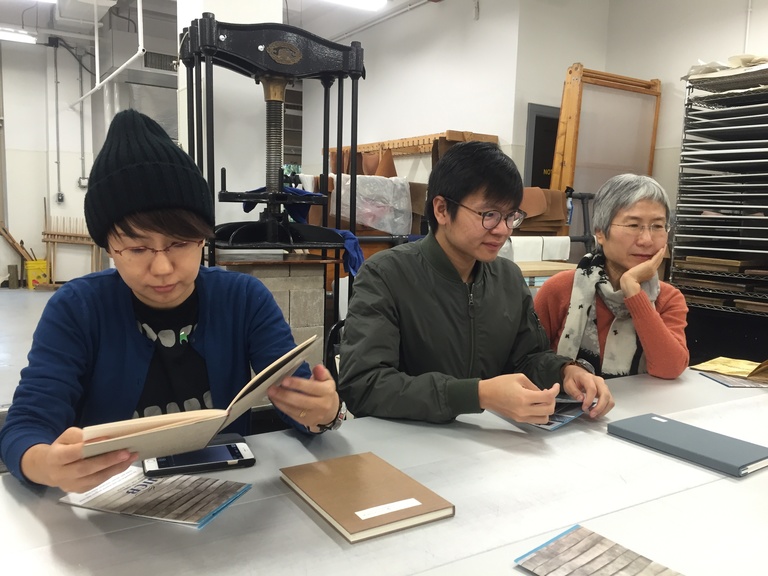 2016 IWP participants (l to r) Shibasaki Tomoka, Hao Guang Tse, and Virginia Ng at the UI's Center for the Book.

We kept Tomoka very busy during her time in Iowa City. Tomoka read at Shambaugh House very early in the cycle of writers. She visited our undergraduate Japanese-to-English translation class a couple of times, and patiently answered questions from her translators about her life as a writer in general.  After eight weeks of frantic translating and editing, the students read with Tomoka from two never-before-translated stories to a crowd of students, professors, and members of the community. Tomoka read at Washington High School in Cedar Rapids with one member of the translation class who was a graduate of Washington High. She participated in a round-table discussion at the Iowa Book Festival about writing and new technologies. She is an avid Twitter user, and revealed to the crowd there one secret to Twitter’s success in Japan: you can do a lot more with 140 characters in Japanese than you can in English. She went on trips to New Orleans, New York, and Washington DC with the other IWP writers. Along the way, she always found time to explore the space around her.

Tomoka and I visited the University of Oregon for a couple of days in October. She participated in one last bilingual reading, this time with me, met with graduate students and faculty, and signed a book that one kind undergraduate had borrowed from the University of Washington library and wanted to send back with a signature! Somehow in all of this, we had time to wander the red-brick, woodsy campus so different from our own, and Tomoka managed to find one thing that the University of Oregon definitely has on us: a Seven-Eleven right by campus. For the explorer of urban Japan, the convenience store offers sustenance and even companionship; at night, the glow of a Seven-Eleven is a reminder that you are not alone in the world. In Tomoka’s story “Right Here, Right Here,” one of the stories her student-translators read to prepare for their work with her, the protagonist is out in the city just before dawn, and the world is illuminated not by the rising sun but by the light of a convenience store. When Tomoka saw the Seven-Eleven in Oregon, she greeted it like an old friend. (Of course, when she saw the Double Big Gulp, not available in Japan, it was as though her old friend had come up with some crazy and possibly dangerous ideas since they had last met.)

The last few days of the residency were a flurry, as they always are, but we realized there was an opening in Tomoka’s schedule for one last trip around Iowa City. Together with Virginia Ng, an IWP writer from Hong Kong, we drove the history of the city, from the long-gone neighborhood that once occupied the grassy field across from the Iowa House Hotel where she was staying, through the oldest neighborhoods ringing the university, to the Moffett Houses on Muscatine, and down Court Street through the 1960s, ’70s, ’80s, ’90s, and into today and beyond. Our tour ended at corn fields that may well have been transformed into city blocks the next time she comes to Iowa City, and we drove back to the Iowa House Hotel through a campus still transforming in the long wake of the flood of 2008. But the city as it stood in the fall of 2016 has been preserved in time, locked in Tomoka’s prodigious memory and transported back to Japan, where it will appear again as traces, in stories not yet dreamed.

Shibasaki Tomoka was awarded the Akutagawa Prize in 2014 for her novella Spring Garden (available in English from Pushkin Press). Since May 2017, she has been serializing stories about her time in Iowa City in Shinchō, one of the major literary magazines in Japan. Kendall Heitzman’s translation of her story “Right Here, Right Here,” together with an essay on her work, “Shibasaki Tomoka’s Literature of Location,” can be found in the US-Japan Women’s Journal 51 (2016).