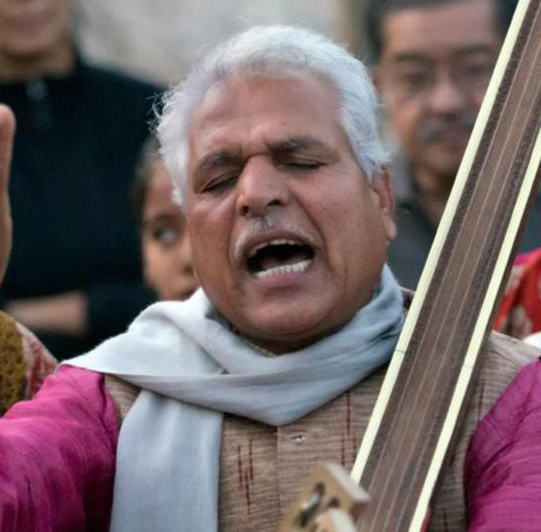 The UI South Asian Studies Program (SASP) will host an evening of Kabir songs by the award-winning Prahlad Singh Tipanya group. This event is free and open to the public and will be held on Wednesday, April 5, 2017, at 7:30 p.m. in the Concert Hall of the Voxman Music Building.

Prahlad Singh Tipanya and his team will sing the poetry of Kabir, the great iconoclastic mystic of North India, in the vigorous and joyful folk style of Madhya Pradesh’s Malwa region. From his beginning as a village schoolteacher with no musical background, Mr. Tipanya has risen to receive the Padma Shri award, one of the highest honors bestowed by the Indian government. During the concert, Linda Hess, a leading scholar and translator of Kabir, will present translations of the powerful poetry that the musicians will sing.

Prahlad Singh Tipanya is one of the most popular and highly honored folk singers of North India. He lives in Lunyakhedi village, near Ujjain, Madhya Pradesh, where he was born in 1954. Playing the 5-stringed tambura and percussive kartal as he sings, he will be joined by five fellow musicians who play dholak (two-headed drum), violin, harmonium, and small finger-cymbals while accompanying him in singing. The “Kabir singers” toured the US in 2003 and 2009, to great acclaim.

Individuals with disabilities are encouraged to attend all University of Iowa-sponsored events. If you are a person with a disability who requires a reasonable accommodation in order to participate in this program, please contact Sarolta Petersen in advance at 319-335-3862 or sarolta-petersen@uiowa.edu.