For Dr. Kendra Strand, one of the best things about living in Iowa City is being able to walk to and from her classes on a nice day, taking in the scenery. But it’s not just the daily strolls she loves the most—rather, it’s being able to take a different street each day and discover new places, views, and perspectives wherever she goes. 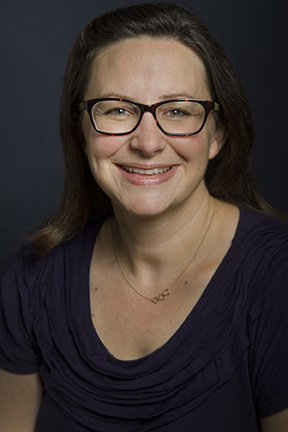 “Taking the time to appreciate everything, from the diverse community to the history that’s preserved in the parks and architecture here, is really important to me,” Strand said.

This mindset is one that carries into her career as an assistant professor here at the University of Iowa, where she recently wrapped up her first semester teaching premodern Japanese literature and visual culture in the department of Asian and Slavic Languages and Literatures.

Professor Strand’s position was made possible thanks to a Japan Foundation Institutional Project Support (IPS) Grant. Over the next few years, the goal of this grant is to transform the study of Japan at the UI, while focusing on how traditional Japanese culture continues to shape our culture today. Conversely, it explores how modern technology and our digital world can allow us to more deeply understand traditional Japanese culture.

“Openings in premodern Japanese literature are rare enough these days, so seeing that together with visual culture in the job description made me feel like it was written just for me.… Iowa was my first choice,” she said.

Strand’s passion for Japan began during her undergraduate studies at the University of Montana, where she started out as a creative writing and English literature major, with a focus in Japanese language. The art of translation was what first grabbed her attention—especially when she learned how much of it is an act of creative writing itself.

“It takes a linguistic ability to read and understand Japanese literature,” she said. “But to write a translation in English, you have to come up with something beautiful. The end result must reflect the original work in some way, but must also stand as a poem or piece of literature on its own.”

When Strand completed her bachelor’s degree in 2004, she and her husband both found jobs on the Japan Exchange and Teaching (JET) Program teaching English. For two years they lived on Shikoku, the smallest and most rural of Japan’s four main islands, during which time they traveled to several traditional pilgrimage sites, temples, and shrines. With each place they visited, she began to think more critically about the importance of their history.

“I saw these places in person, and was amazed not only at how beautiful they were, but at how many people valued and interacted with them in a range of ways,” she said.

“I also realized how these temples were, in a way, museums—many have a storehouse of traditional texts and paintings and other objects that they would put on display. Seeing that firsthand made me realize just how interesting it was to me.”

From then on, she knew that she wanted to study Japanese literature and art.

Today, much of her research is focused on medieval travel diaries by political elites of the fourteenth century—she has translated four of them. What she finds most interesting about them is how the culture of poetic composition was so valued by the aristocracy. In other words, being a successful poet was a way for members of this society to raise their social status and improve their political rank.

Oftentimes, Strand explained, many of these diaries are overlooked because the people writing them are not yet well-established poets. But that’s what she loves about them.

“It shows that they’re real people, and in some ways that makes them more relatable,” she said.

“It’s a challenge, but reaching back and trying to understand the writer as an individual person… It’s like meeting them halfway. Translating really feels collaborative in that way, because even if that person isn’t alive today, I want to get to know them to produce a translated work.”

One of the other more intricate challenges of translating Classical Japanese, Strand said, is that the language is entirely different from what is spoken in Japan today. Essentially, it’s a separate language that Strand needed to learn after mastering modern Japanese—even for people familiar with contemporary Japanese, the process of trying to read premodern Japanese texts is similar to what a modern English speaker goes through attempting to read Shakespearean English or even Latin. Classical Japanese might seem to have a lot of similar vocabulary, but the meanings of many words have changed, and grammar is quite different from Modern Japanese.

Even though she’s comfortable reading and translating it, she often is presented with yet another curveball: reading from the manuscript, or the physical object, itself.

“That was a huge learning curve, developing the skills to read kuzushiji, or cursive calligraphy,” she said.

“And it’s still kind of a time-consuming process. Each hand has different characteristics in how the characters look, so even if you get used to one person’s handwriting, it can be like starting all over from scratch in being able to decipher another person’s writing.”

Strand admits that texts written in Classical Japanese may seem far removed from daily life today. But she sees the desire to communicate through writing as human nature.

Even if a certain text seems irrelevant at first, she finds that after exploring its context—what was happening when it was produced, or who the people involved were and what they were concerned about—it is clear that they are not that different from us. The problems that people faced years ago are surprisingly similar to the ones we are up against today.

“These people have written about social status, political power, concern for how land is being used, and everything in between,” Strand said.

“Because of that, I’m always reminded this is why my work is important. We can gain insight into ourselves and how our world works, and how we individually can process emotions or function in society, when we read the words of other people.”